Chef Jung Sik Yim on Making Your Own Taste

Much to our excitement, we had the great pleasure of chatting with chef Jung Sik Yim of restaurant Jungsik – the first and only Korean restaurant to receive not one but two Michelin stars. Take a moment and discover what sets Korean cuisine apart from others, how the chef began his culinary journey in the army, and the inspiration behind his new fall menu at Jungsik, Seoul.

Since opening in February 2009, in Seoul, Jungsik gained international attention as the first restaurant to apply molecular gastronomy to Korean ingredients. Harnessing 2 Michelin stars and landing No.10 on Asia’s 50 Best Restaurants – as well as Best Restaurant in South Korea – Jungsik‘s success has since led to the opening of a second outpost in NYC. However, it is still his original location that remains the premier dining destination.

Unlike most chefs’ beginnings, Jung Sik Yim began his journey while in the army. He threw together recipes for the first time as his mother dictated them over the phone, and since then it seems he always stayed close to a kitchen, and eventually attended the Culinary Institute of America, in 2003. Starting from his youth – when bananas or even a can of Spam were novelty items from the states, all the way to the present – where he now takes the lead in Korean fine dining, read on and learn what more this chef has to say about how far he’s come, the importance of balance – in all areas of life – and making your own taste as part of Korean dining culture. 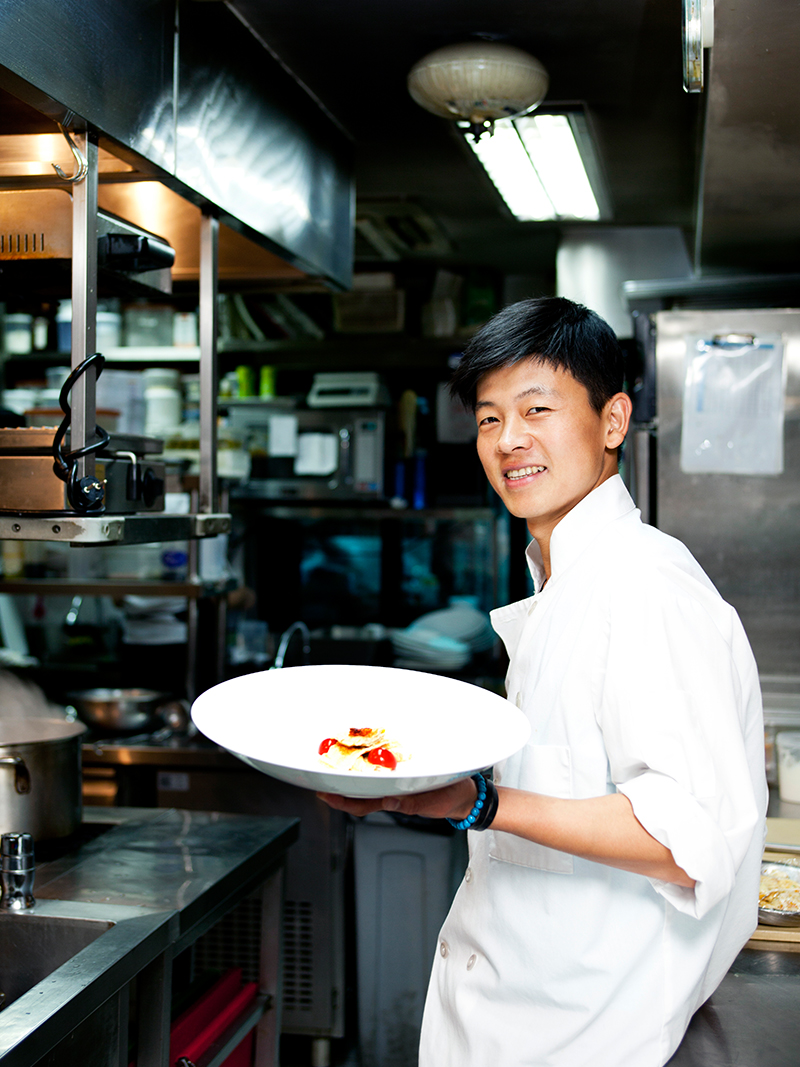 Please tell us about yourself – from your early childhood memories to how you came to where you are today.
When I was young, I was pretty fat. I ate a lot of food. I still remember my cousin that lived outside of Korea was running a supermarket. So, whenever they came to Korea, they brought some western food. And at that time – around 1980 – there is no product from the outside [of Korea]. I was the only guy who had seen or eaten spam or canned American things. There wasn’t even banana in Korea at the time! You could get a banana only from a U.S. soldier. But, that was when I was like 8 years old.

The starting point was when I was in the military. Every single guy [in Korea] has to go there. And during that time, my job was to cook – by chance. The cook had gone on vacation, so the office asked me to take the position for two weeks. That was my first time making food. But [my cooking] was better than the other guy, so the officer told me to take the job. That was my first time. 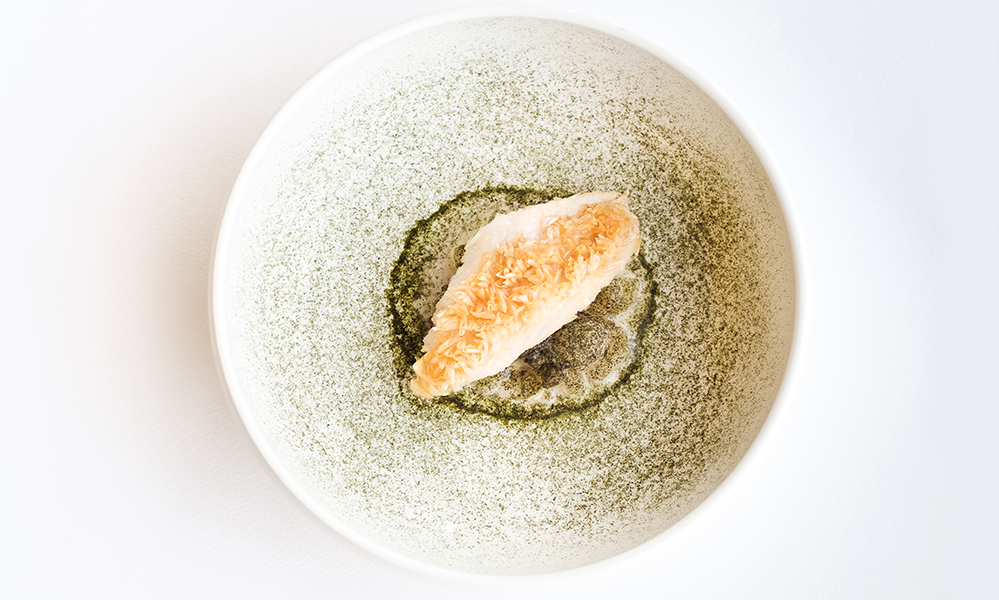 But while I was doing that, I thought that I had found something. Something that I can do, that I can make better than other people. That was when I was about 19. I never had a dream. I never had some favorite kind of work. But that was the first time I thought, “Wow, cooking is my job!” That is what made me a chef today.

After the army, I got a job working at a small bar, as a waiter and a dishwasher…I worked at some Korean rice cake company, a bakery shop, and some other bars and restaurants as well. Many places. And finally, I moved to the Culinary Institute of America, in 2003, because I really wanted to study professional cooking. Two years later, I graduated from the school, and I was working at a fine dining restaurant in New York City. And, my dream had begun.

Ten years ago, my dream was to have my own restaurant. After that – now, it’s to become a great chef. 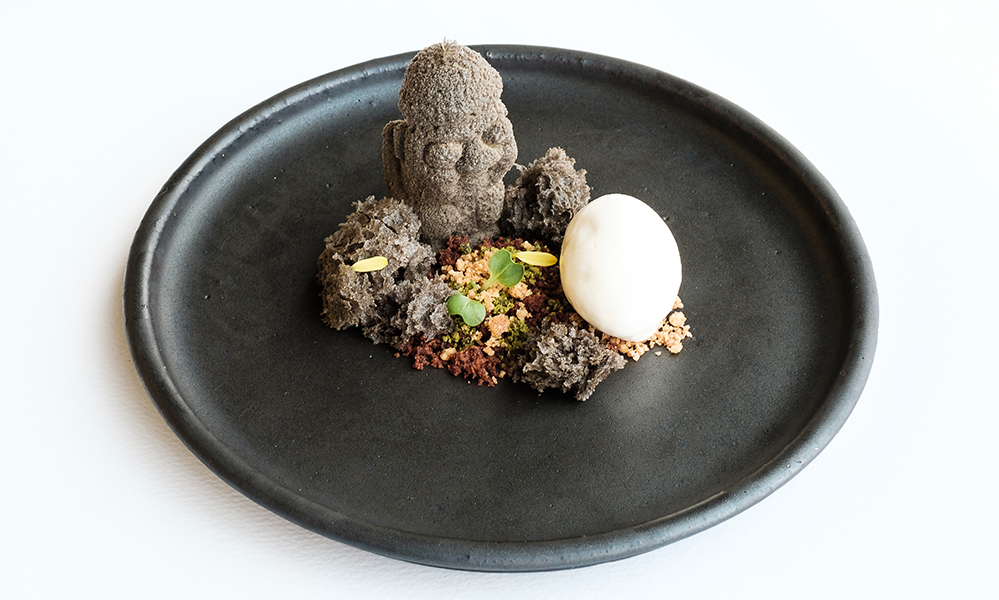 So were you always interested in food?
No, just eating. Eating! No cooking. But [because of those memories], I always try to make good food. Not just because of hunger. But just [for the sake of] tasty food. Enjoying and eating a lot.

Can you please describe your personal and professional aesthetic?
Good balance. That is the most important thing – as a chef, as a man, as an owner. Food has to be a good balance between the customer and myself. As a chef, I want to do some crazy things. But I have to make something that everyone likes. So it has to equal balance. And compromise. 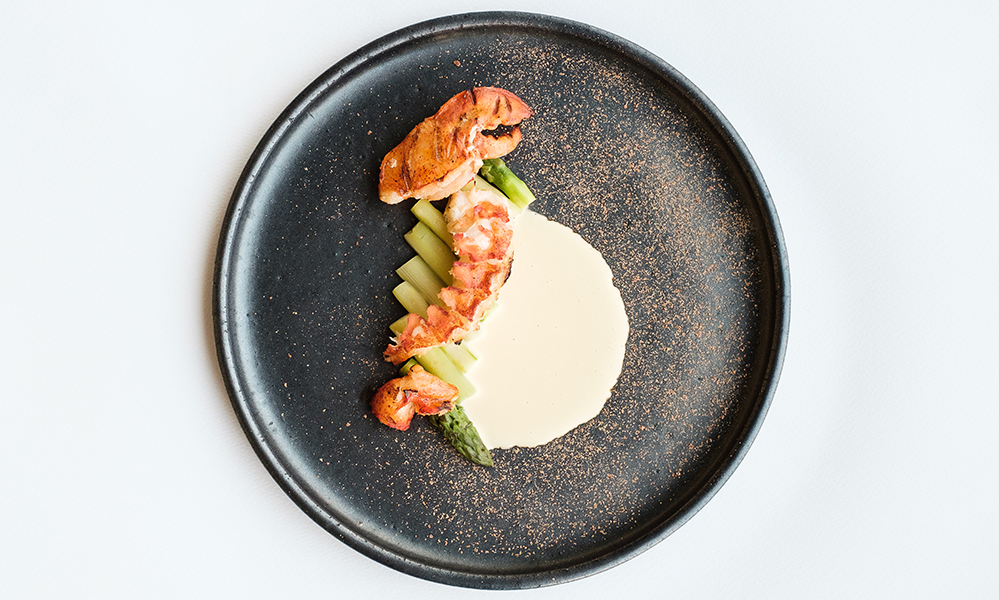 Korean cuisine has gained significant attention within recent years – what role do you play in this? What do you see for the future of Korean cuisine?
I don’t know about the future of food. But my restaurant has been on Asia’s Best 50. A lot of people expect a lot from me, and they want me to do more. I always thought of this as only for my food and for my restaurant. But now, at the moment, I have to do it for the whole industry. That is my role. I have to make this better for the industry that I’m in. That means I have to make another good restaurant. Make this industry bigger. Bigger, bigger bigger! People from the outside – they watch restaurants, the good restaurants. And there are just a few restaurants that know about the Seoul industry. So I have to make more. 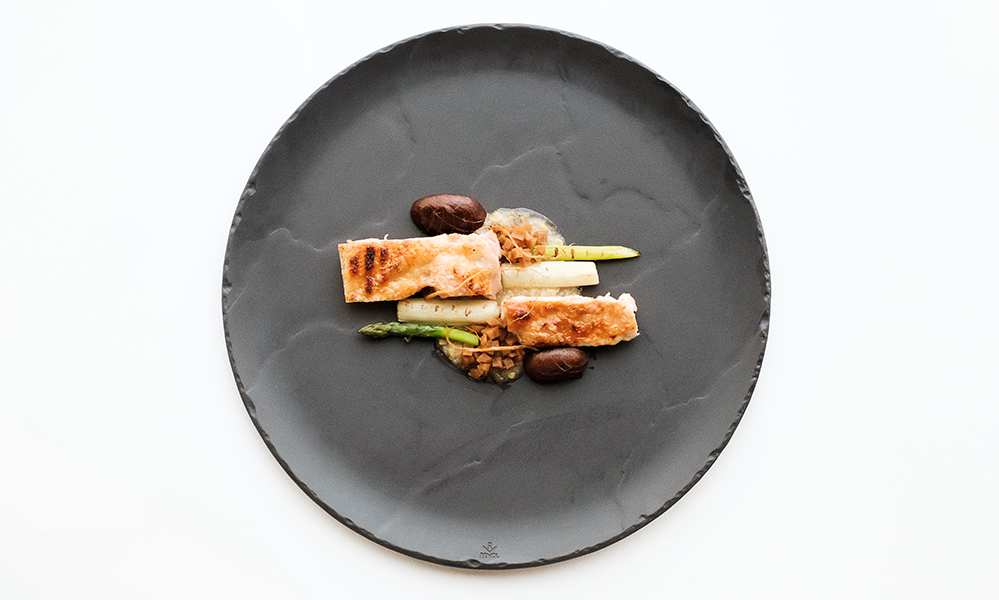 How about your food?
Just…getting simple. When I started, I mixed a lot. But at the moment, I just do one texture. One flavor. And less sauce.

What is important to know or understand about Korean cuisine? What about your cuisine, specifically?
The main difference for me? The way Koreans eat their food. Because most [other types of] food – it’s all in one plate. But people go to a Korean restaurant, you get rice, soup, and banchan (side dishes). So, people – Koreans – they know how the banchan is supposed to taste. So they try to make balance. You finish your dish. You make the last selection. You make your own taste. Sometimes – Koreans – they put rice into the soup and eat it like that – with some kimchi (fermented cabbage).

Sometimes table service, like BBQ and jeongol (Korean-style hotpot) – those are the biggest things in Korean cuisine. Not the flavor. But how we eat. Making your own taste. Good balance. I like BBQ and jeongol…the way people eat it – self-cooking on the table. That’s why I like it. Because people share.

What are some of the flavor combinations?
Some garlic, soy sauce, sugar. Some sweet with the meat. Soybean paste. Rich and fatty, a little salty, a little spicy.

Tell us about learning to cook in the army. Do you carry that experience with you in your cuisine today?
They don’t teach us. I called my mom. “Mom, how did you make this?” You know, moms don’t have a recipe. “Just put some garlic, some pepper.” “Okay, I’ll try.” And as my mom did, I did the same thing. You try the taste. It’s good? More soy sauce? Less salt? Whatever. But that was a pretty good learning experience. They have a recipe book, but nobody follows that. And they don’t even know where it is. 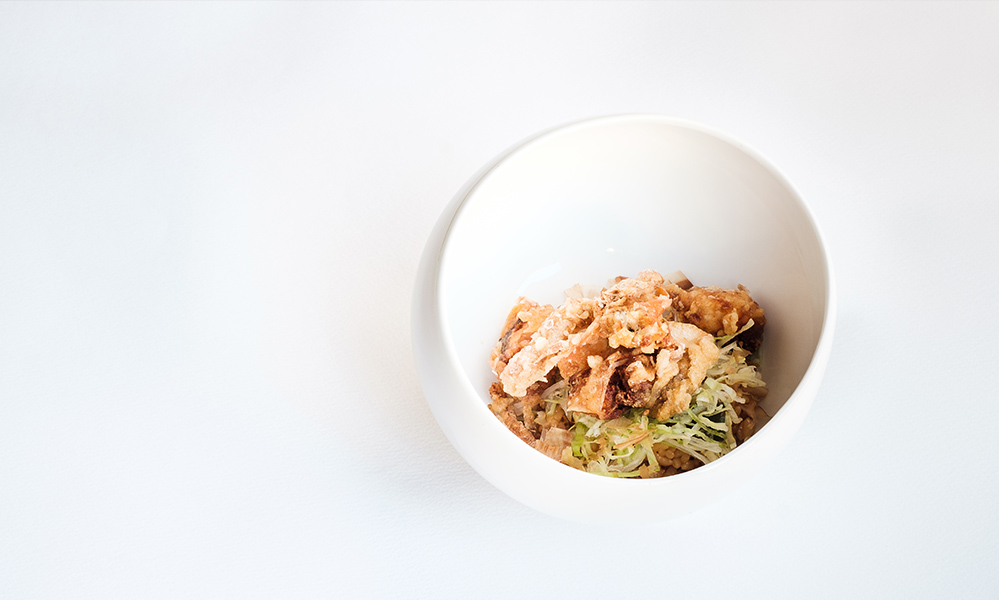 Since opening in 2009, how has your restaurant evolved?
I was lucky. I was very lucky. Because that year, the government started the Korean food global…location..thing? My concept was new Korean, which never happened before. I didn’t do any PR, but my restaurant went on the Chosun Ilbo – like the NYTimes of Korea. That was something I never expected. Because, at the time, [Korea’s] economy was down. The economy was bad. But the restaurant was doing really well. It was good timing. I was so lucky.

Your style?
As I mentioned before, it’s getting simple. At first, I was doing something crazy…or food that doesn’t really look like food. I tried to make something special, something different. But now? Simple. And more luxury. 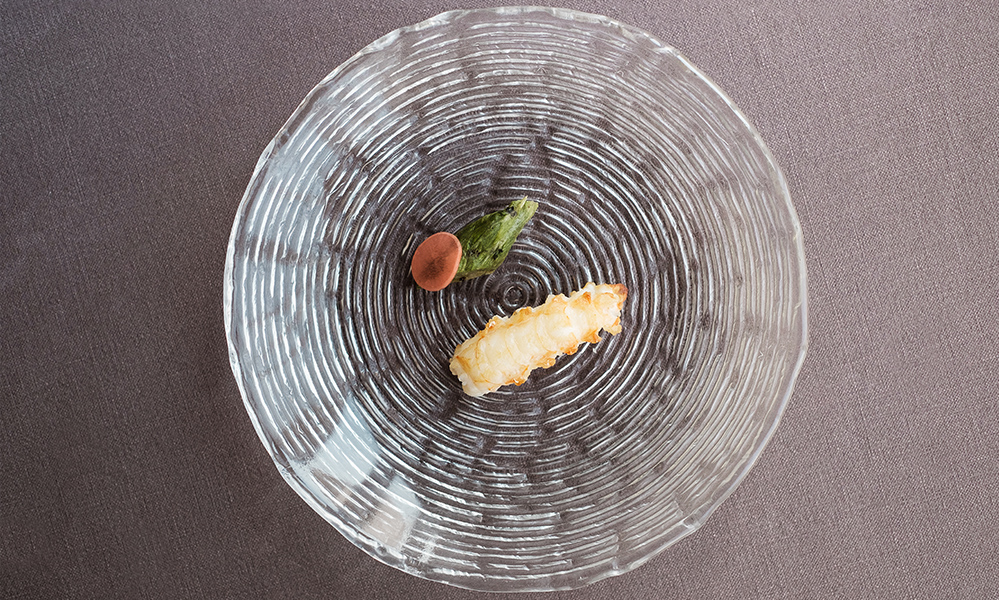 What is the inspiration behind your new fall menu for Jungsik, Seoul? What should patrons expect?
I’m developing a menu for November. Getting the best ingredients in Korea – the best pork, the best fish, the best vegetable. I set up 7 courses. So every course is a different style of cooking. Something grilled, something broiled, something steamed, something charcoaled. The dish is only that ingredient. I don’t put any sauce on it. It’s all separate – the salt or flavored powder – so people can make their own flavors. A little like Korean dishes.

I’m contacting Kwang Ju Yo – that is the most famous dish maker – to get new guh-ruht (dishes). All handmade. Like Korean do-jah-gee (Chinaware).

What is your favorite dish of the moment?
Gujeolpan. Gujeolpan is a very traditional, old dish. Something people never order. Just a few restaurants have that on the menu, because it looks good, but it tastes like nothing. If you go to any restaurant that makes gujeolpan, it is very simple. It is rice and vegetables wrapped in some geem (seaweed) or flour cake. You wrap and put vegetables inside, and dip it in mustard or whatever. So that doesn’t taste like anything.

So, I decided to make gujeolpan into a really charming dish. I decided to use geem – crispy geem – that has some good texture. And yukhwe – that is beef tartare. That is very Korean, the old way. And people like the way you eat it! Gujeolpan means 9 ingredients. So, people pick up some crispy geem, put some yukhwe on it, and put in some other ingredients. It’s fun. I mean, they make their own taste. A good taste. That is why I set the name, “Delicious Gujeolpan,” not just “Gujeolpan.” Because I really want to change people’s thinking of gujeolpan.

At the moment, I [also] love the duck. You know, in fine dining, we always change the menu. It has been my 10th duck – I mean, since opening. But it keeps getting better. If you order duck, people expect something crispy. Always, whenever someone orders meat, they expect something crispy, something salty. But duck has a lot of ssim jjool (sinew) – things that make the beef, the meat, very chewy. Every meat has that. I found out that cutting more sinew from the meat and drying the duck for 5 days – the skin gets crispy. That’s something basic, but it has gotten better and better from the last time. So, at the moment, at this moment, I love the duck. The [method] is getting better. The next step? I’ve gotta take out more sinew without cutting the meat. The sinew is inside of the meat, so I have to cut very little meat. Keep the good shape of the meat, but take out the sinew. Nothing special, but still.

Tell us about Jungsik Bar and how you created its menu?
Basically…the theme is a glass wine bar. When I go to a wine bar, I want to try many kinds of glasses. But few wine bars have a glass list. So, we set it so that you can order a little tiny shot, like a 1/4 glass. There are 24 different kinds of glasses here. [As for the food] – Sometimes, people are not that hungry, but whenever I go to a wine bar, I want to pair the wine with some food. But I don’t want to get fat. I want just a bite. So all glasses have a small bite served with them. 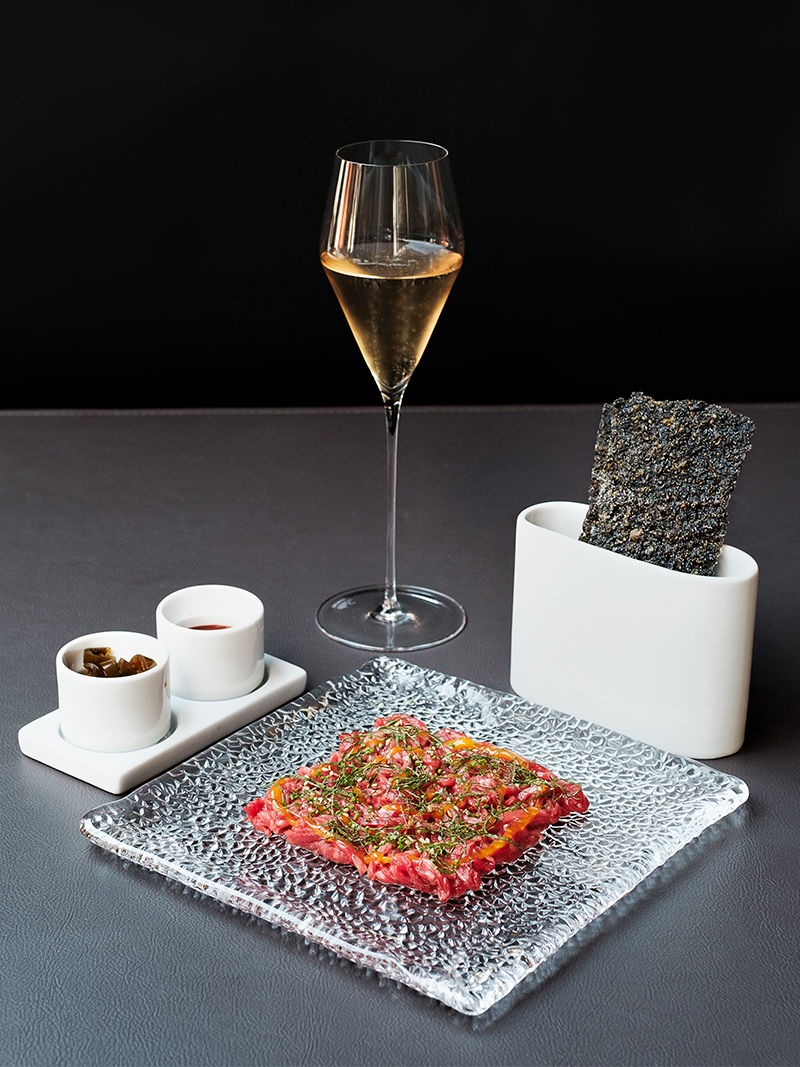 5 things you cannot live without?
Wife (family), wine, kitchen, my bicycle, and my crew.

And finally, what is one personal tip you have for plating?
I go very simple. Simple, but with good feeling. 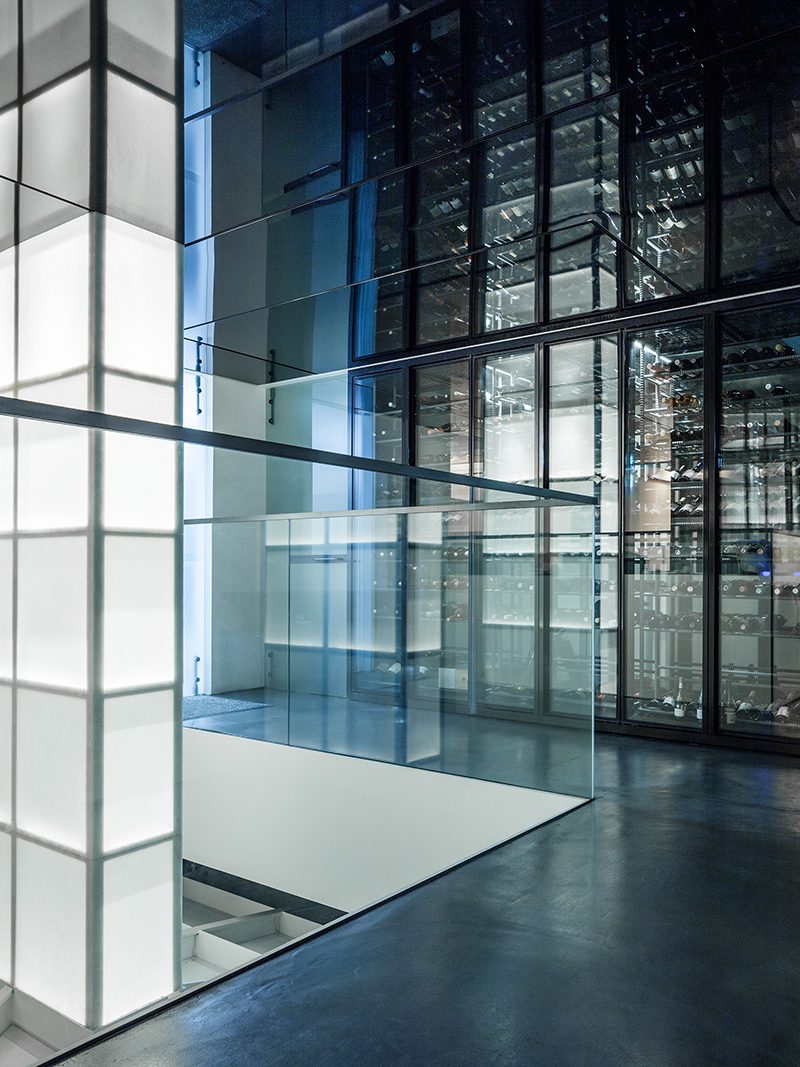 Bar lounge at Jungsik. © One O One Factor

Bar terrace at Jungsik. © One O One Factor