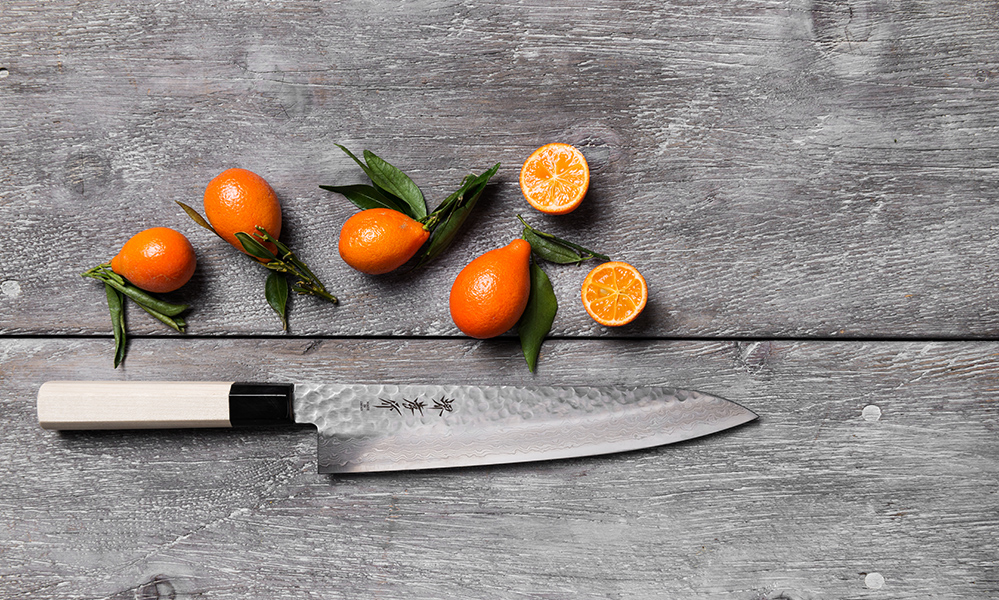 Jeremy Watson of Chubo Knives: A Love Affair with Japan

Following up with our recent Instagram takeover by Chubo Knives, we sat down with the founder, Jeremy Watson. Take a minute and read about his childhood struggle with Asian lunches, why Japanese cutlery is one of the best, and his favorite spots to visit in Japan.

Growing up in South Florida, Jeremy had trouble fitting in with the other “middle-class white kid(s)” at school with his fried rice lunches, while everyone around him brought bologna sandwiches. It wasn’t until he arrived at Oberlin College & Conservatory that he truly explored his Asian heritage and learned to embrace people from all over the world.

While working at a publishing company in London, Jeremy hopped on every opportunity to travel. After venturing overseas to countries like Japan, Laos, China, and more, he found himself curiously drawn to Japan, fell in love, and instantly felt at home. From there stems the story of Chubo Knives, a Japanese kitchenware distributor dedicated to offering cutlery and more of the highest grade – beloved by professionals and amateurs alike. This is Jeremy’s story.

What drew you to Japan?
I grew up in South Florida, in the 1980’s, at a time when there was very little diversity. My mother is from Hong Kong, and I felt very different from my classmates and had a hard time fitting in. You know the typical story – getting fried rice in the lunch box instead of a bologna sandwich sort of thing. So for many years, I was really more interested in trying to blend in than exploring my Asian heritage. 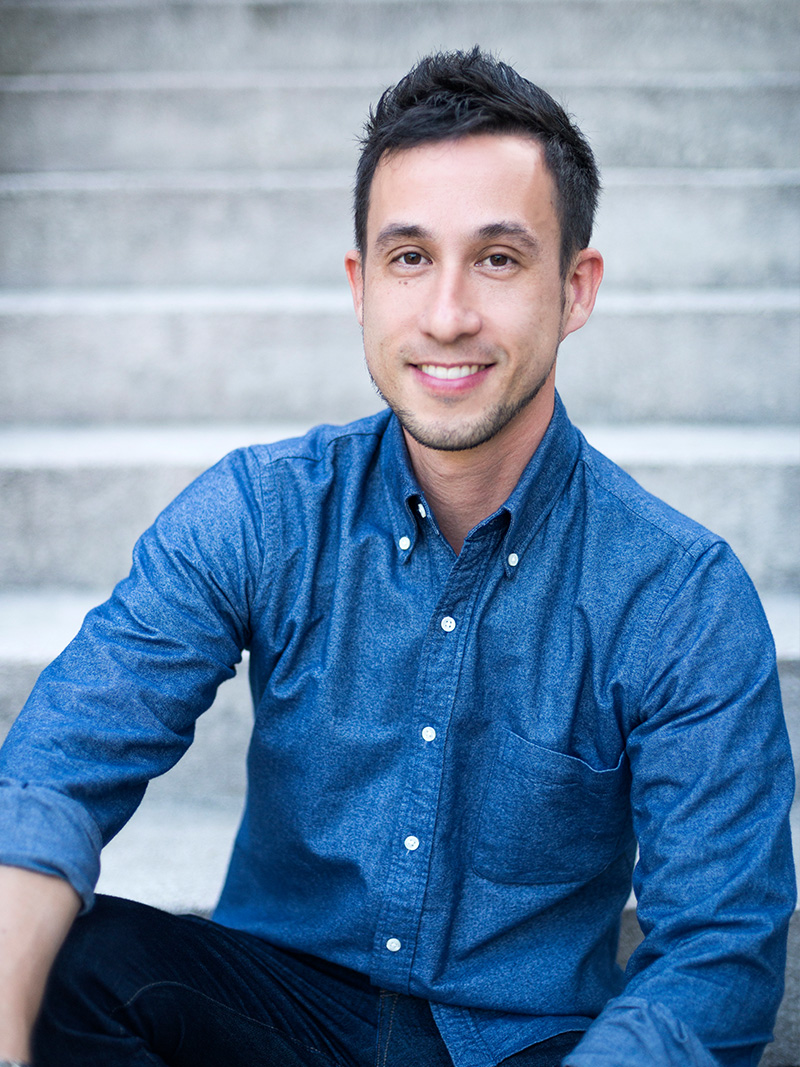 College was my first chance to get far away from that. I went to Oberlin, and I realized when I was there that life was not about trying to be this middle-class white kid. I just loved hanging out with people from all different backgrounds. When I graduated, I went to London to work for a publishing company and went traveling every chance I got. Over about four years, I went to Thailand, Laos, Myanmar, Vietnam, China, and Japan. I guess I was really drawn to the culture and food of Asia as a whole – but especially Japan. When I felt it was time to leave London, I decided to try living in Japan for one year…and ended up staying for five! 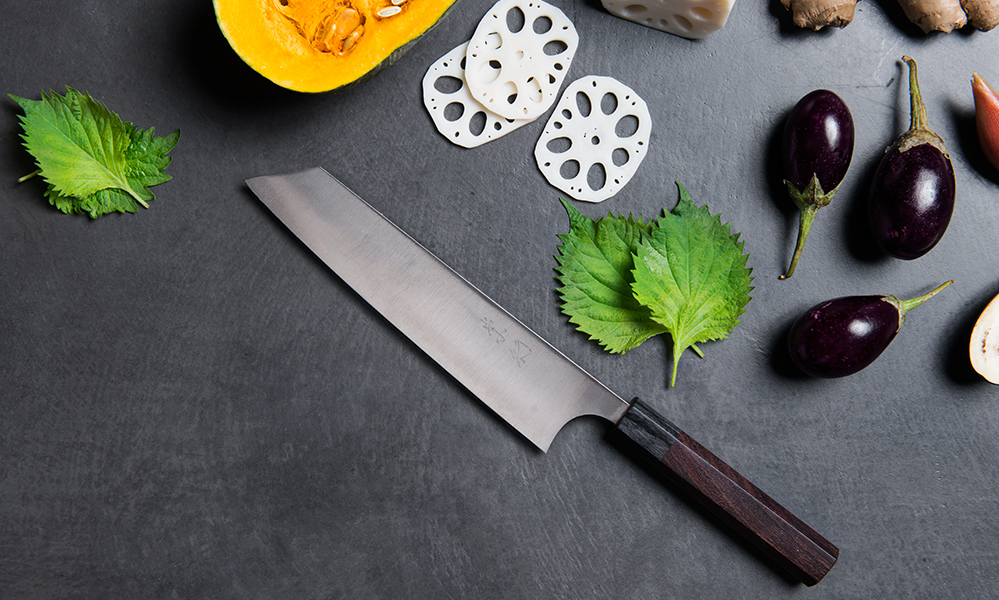 Can you tell us about your years living and working there?
Other than difficulty learning the language – which is a lifelong project – I felt at home in Japan pretty quickly.

If you’ve been to Japan, I think the one thing that never stops impressing you is the level of respect in the culture here. You can see it on so many levels – from the way strangers interact, to how friends treat each other, and to how hospitable people are. People are always thinking about how their actions and words affect the people around them, which trickles down to all aspects of life here. 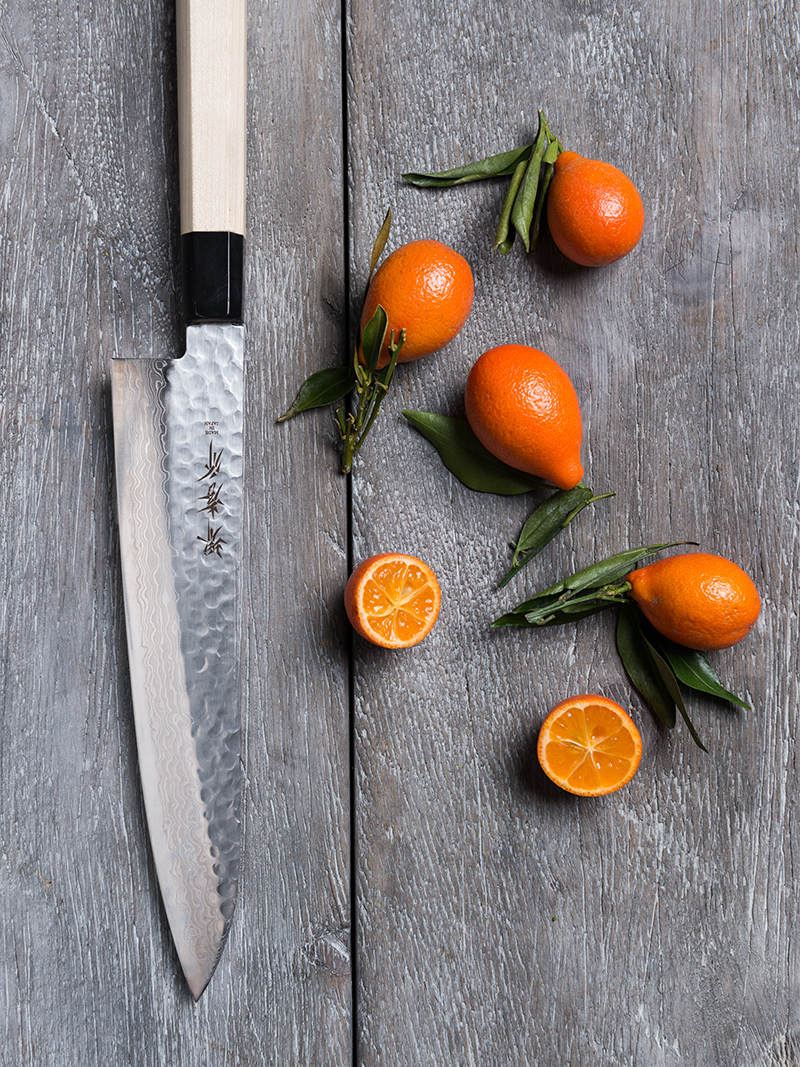 When people think of Japan, they tend to think of a fast-paced, crowded country. While that’s true on some levels, overall Japan feels like a really calm and peaceful place. When I’m away for more than a week, I really start to miss it.

The food is also pretty insane. It’s just on another level, and not just at the high end. Restaurants at all levels really care about putting out good food. The culture has such an incredible depth. Even though I’ve spent a total of eight years living here, I still feel like I discover something new constantly. 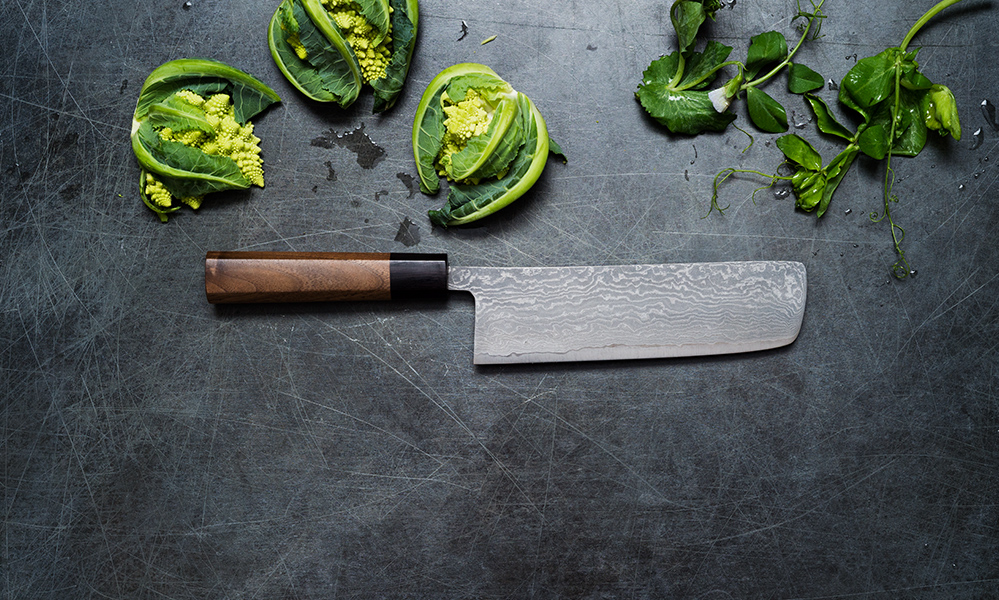 How did your inspiration for Chubo Knives develop?
When I lived in Japan in my 20’s, I gained a huge amount of respect for the culture of craftsmanship and fell in love with the food culture. Then, I moved to New York and spent a few years working in sales for the restaurant industry. Through that, I really understood that the cuisine and kitchens in New York were functioning at such a high level, and there was a need for handcrafted and high quality Japanese knives.

What is the meaning of chubo?
Chubo means ‘restaurant kitchen’ in Japanese. I chose the name, because our products reflect all the positive characteristics of a Japanese kitchen – i.e. craftsmanship perfected over years, attention to detail, using the best materials. Our products have been used and perfected over the years with feedback between blacksmiths and Japanese chefs. 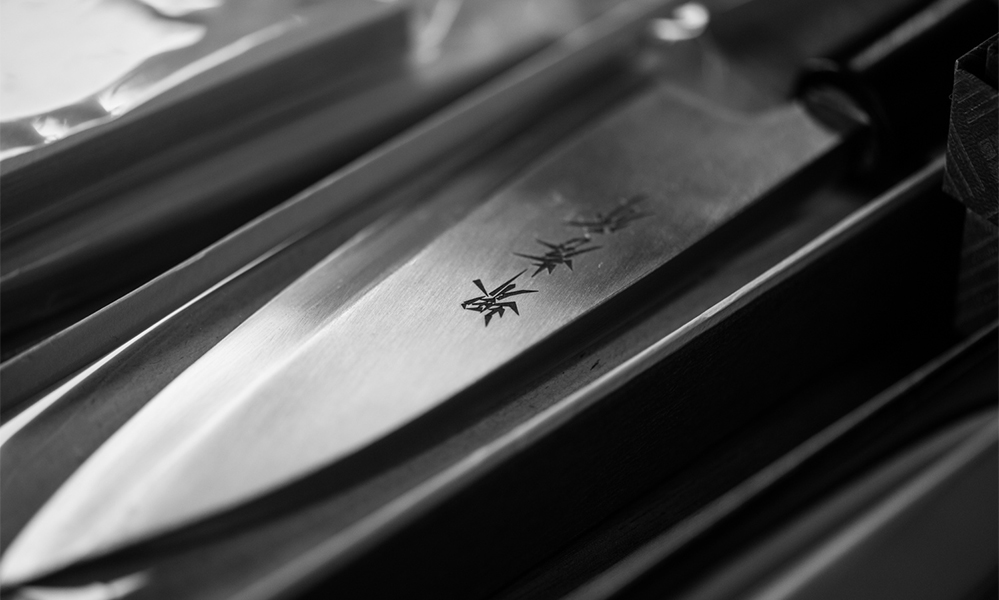 What specific aspects set Japanese cutlery and craftsmanship apart from all else?
In general, Japanese knives are lighter, better balanced and hold an edge longer than European or American-made knives. There are different types of steels used in knife making, but Japanese steels are heat treated to a higher level of hardness, which translates to better edge retention. Hand-forged knives are also hammered into a thinner blade, which allows for more precision and control when doing finer or more detailed knife work.

Forging processes vary between knife makers, but for all the blacksmiths we work with, the process of heating, cooling, forging, and sharpening takes place over several days and requires a high level of expertise and experience. Apprentices are not considered proficient until they’ve been forging for 10 or more years. Most of the high-level blacksmiths have been forging knives for more than 20 years. Also, many craftsmen specialize in one skill, like handling, sharpening or forging and spending a lifetime perfecting it. 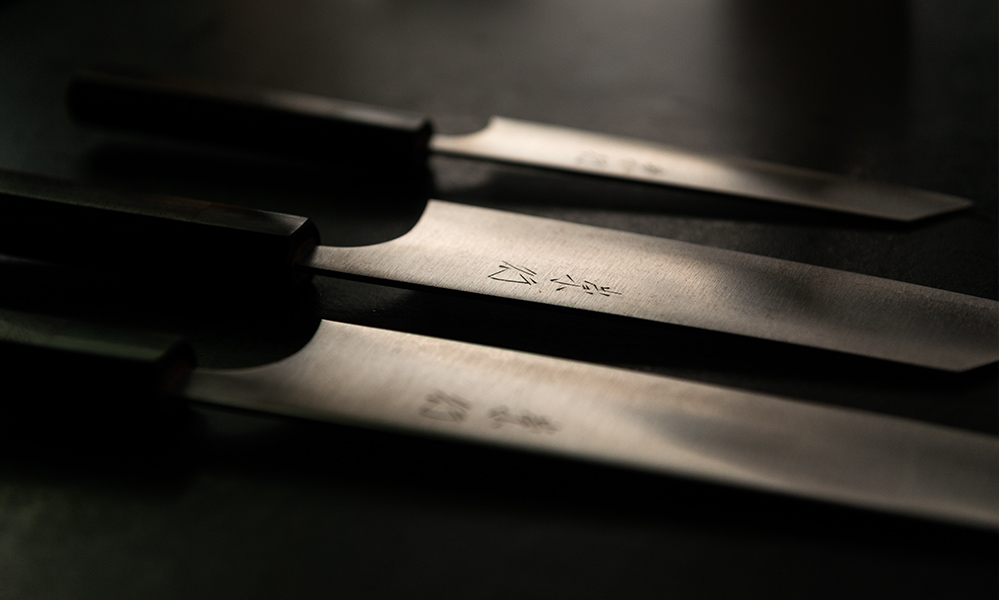 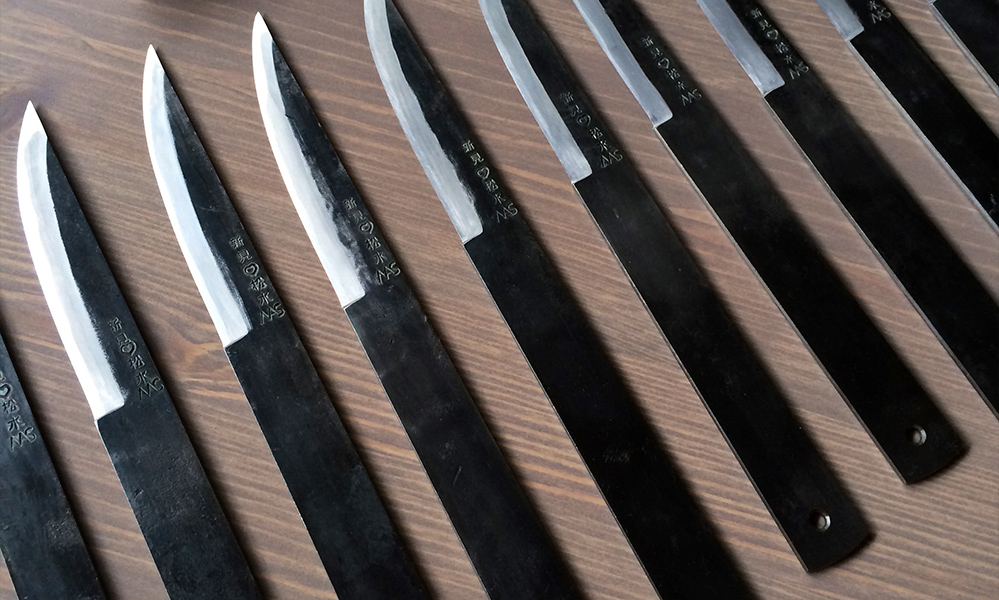 How did you find the many different blacksmiths and craftsmen you work with?
When we launched Chubo, my wife, Junko, and I traveled around Japan to see what was available. There was the challenge of finding craftsmen who were willing to work with us. At the time, we were a new and unknown company without an established sales history. In Japan, many business relationships are formed on the basis of trust built over the years and folks are reluctant to take a risk without someone new. We were lucky to find a few knife makers who believed in our vision and wanted to work together. As the business has grown, we’ve been introduced to other blacksmiths and approached by others. 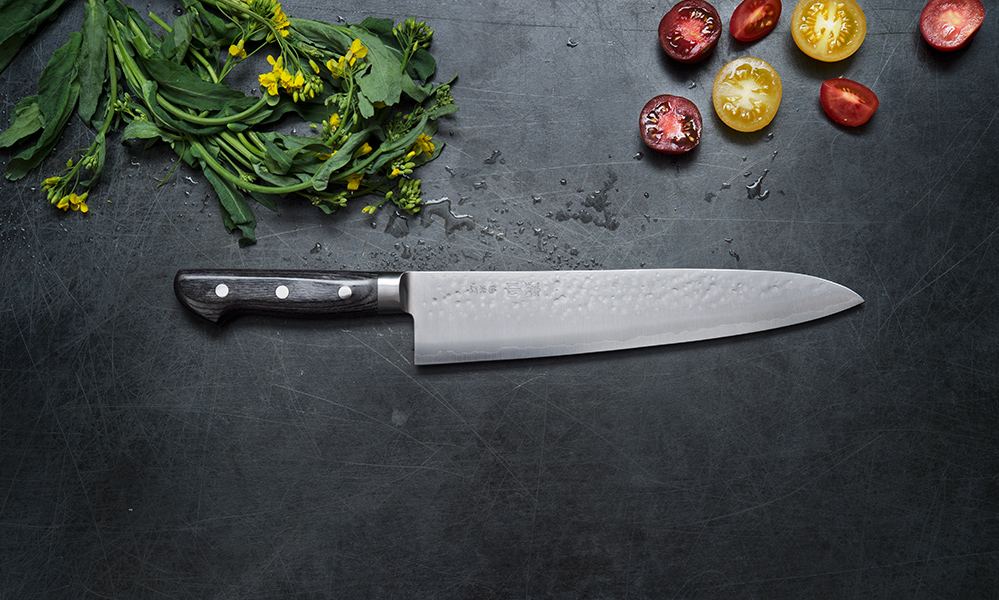 Can you tell us one of your favorite collaboration stories/memories?
One of our most popular lines is a gorgeous hand-forged blue steel line from master blacksmith Shosui Takeda in Okayama, Japan. Last fall, we were approached by Amaury Guyot, of Sherry Butt in Paris, who was interested in collaborating on a knife to be used for a new project. We started with a small knife called a kogatana that chefs are really fond of for doing small detailed work – like cleaning radishes or mushrooms. We worked together with the knife maker to create a well-balanced blade in the right size to be used by guests at the table. We built it together, little by little, and I believe they are using it for steak. 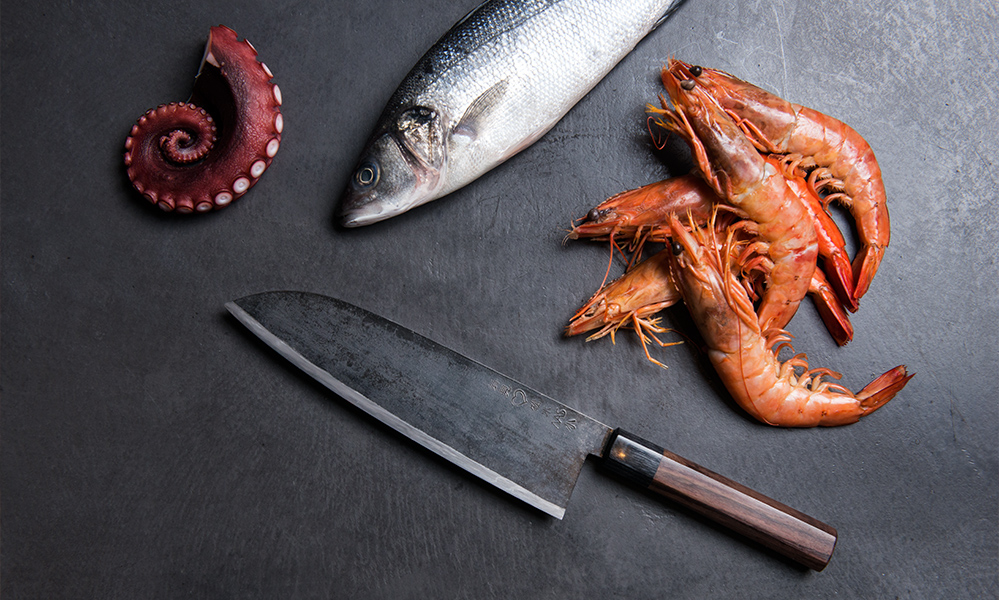 Which is your favorite knife?
It’s hard to pick favorites! Right now, the one I use the most for everyday tasks like cutting fruit and cheese is the Kazan petty. The Kotetsu Bunka is designed for vegetables…but I find myself using it for just about everything. We eat a lot of fish at home, so I use a Sakai Takayuki deba – mostly on mackerel. 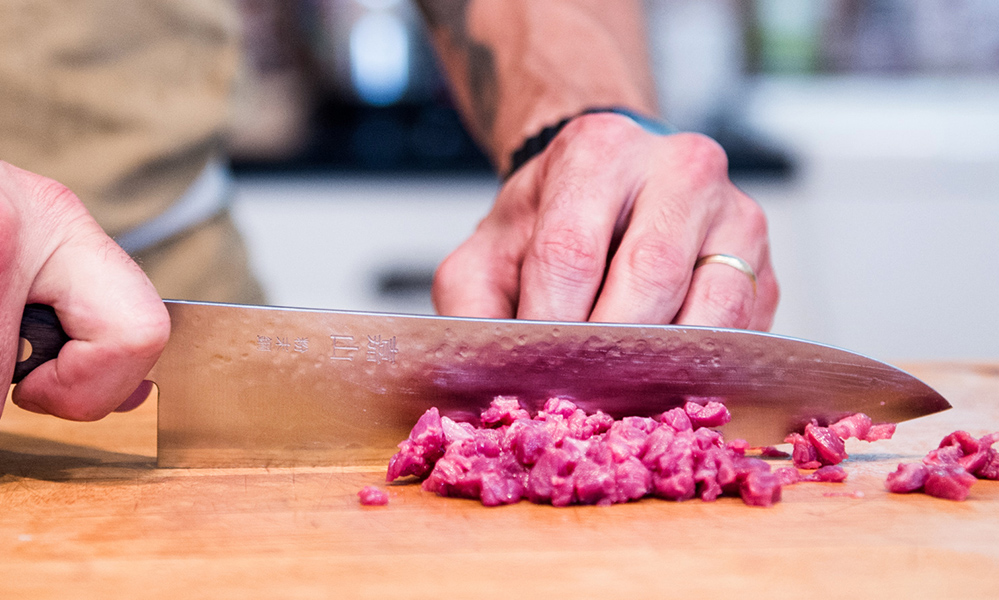 Top 3 places you’d recommend visiting while in Japan?
If you’re looking for the Blade Runner Experience, you can’t miss Tokyo. Kyoto is a must for the traditional kaiseki meals, temples and architecture (Learn more about the art of kaiseki here!). And I’m a big fan of Kanazawa in Ishikawa Prefecture for the best seafood and sake.