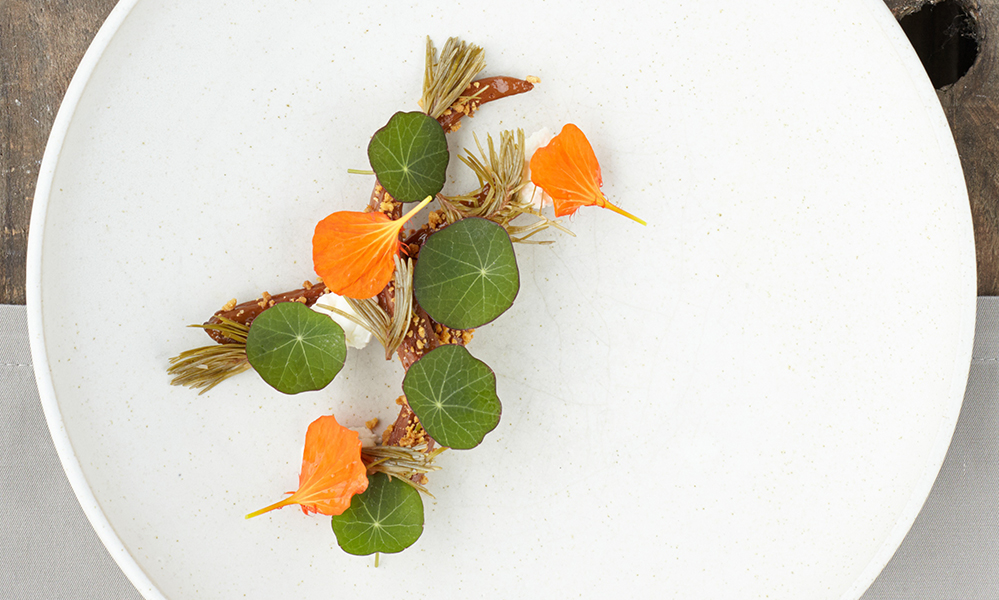 Matt Orlando on the Evolution of Nordic Cuisine

We are in love with Copenhagen. And we are in love with Matt Orlando of Amass. Did you know that Matt Orlando once worked with internationally-acclaimed chef René Redzepi at Noma – for years considered the best restaurant in the world? It’s hard to beat that kind of resumé. Join us, as we sit down with the ex-Noma chef and get his take on the evolution of Nordic cuisine and what his favorite dish at Amass is: a dessert with mushroom.

One of the leading figures heading the movement of young chefs stepping out and beyond the revolutionary precedent set forth by the era of Nordic cuisine, chef Matt Orlando of Amass, Copenhagen, seeks to avoid any kind of label. Coming from the esteemed kitchens of The Fat Duck and Per Se, and working as chef de cuisine with René Redzepi at Noma, Matt opened up the doors of Amass just two years ago to the highly-anticipating public across the world. Since then, he has come nothing short of amazing, while offering his patrons a unique experience – a casual dining atmosphere with very high level food. Read on as Matt Orlando enlightens us on what it means to be part of this next generation and cooking freely as a chef.

Can you tell us about your journey?
I have always worked in restaurants. I grew up surfing, skating and snowboarding. It wasn’t until I worked for a gentleman by the name of Francis Perrot, that I really thought to myself, “This is what I want to do–This is what makes me happy.”

I moved to NY and worked around the city (Aureole and Le Bernardin), then I moved to England and worked at Le Manoir and The Fat Duck. After that, I spent two years at Noma as René Redzepi’s sous chef. I then headed back to NYC to work as one of the sous chefs at Per Se for three years, and then René called. We started talking about me coming back to Copenhagen to take over as the Chef de Cuisine at Noma. I did another two and a half years with René and then decided to stay in Copenhagen to open Amass.

Who are the chefs of the “post-Nordic” movement?
I don’t think “Post-Nordic” is exactly the right term to use here. We are all cooking in the Nordic region and therefore, we are cooking Nordic. It’s the whole “New” Nordic term that everyone is a bit tired of hearing. “New” is a term that the media has labeled it and it has become more of a marketing tool than an actual practice. I think the chefs that are really part of this mindset are the ones that are not afraid to step outside of the boundaries that have been circumscribed by the media. 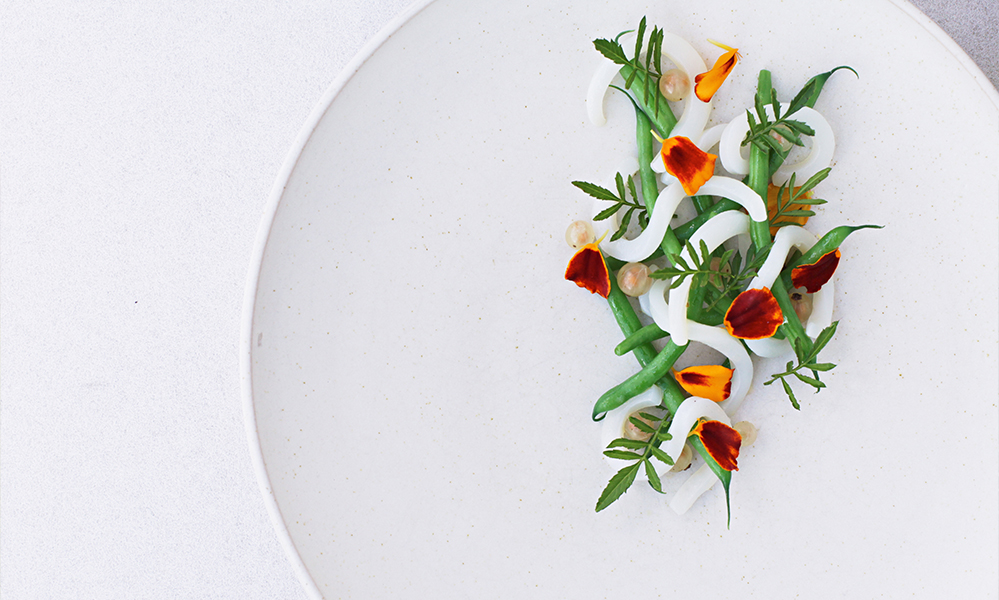 Can you explain to us what this “post-Nordic” movement is about?
This is not about moving past “Nordic” cuisine. This is about the next evolution of Nordic cuisine. We all respect where we have come from, what we have learned cooking here in Scandinavia, and this is the reason why we want to see the cuisine evolve. A lot of the chefs are tired of being put in this box and being told, “You can’t use this, or you can’t use that because it’s not ‘Nordic’.” What are Nordic ingredients? Dill? It doesn’t even come from Scandinavia. Lemon Verbena? It definitely doesn’t come from Scandinavia. But both of these have been labeled “Nordic” herbs. I have a woman that grows amazing tomatoes for us. They come from an hour away and we get them the same morning they are picked. Some people might say, “Well tomatoes aren’t Nordic.”

I think that the chefs themselves don’t want to be labeled at all. They want to cook freely.

Can you tell us about one of your favorite dishes at AMASS?
I think my favorite dish at Amass was one of the desserts we did last winter. It was a burnt sugar ice cream with chestnut cookie and cèpe mushroom oil. The depth and layers in the flavor were really interesting, and it’s always amazing to see the look on people face when you tell them that there are mushrooms in their desserts.

We don’t have a test kitchen so all of our testing is done in the service kitchen and sometimes during service. I personally feel that the dishes should be created in the environment that they are served in. I believe that your taste buds are heightened during service when your adrenaline is pumping, and your creativity blossoms. There were at least 3 to 4 versions of the dessert before we finally settled on one. The first week a dish goes on, it will go through many tweaks and changes.

What (and from where) are some of your favorite ingredients to work with?
I love an herb called orpin. It is super juicy and tastes like green peas. It grows wild in the forests in Denmark. And we recently stated working with a biodynamic cattle farm in the south west of Jutland. We are aging the meat for a three-months minimum and the product is outstanding. I recently took the whole staff to the farm and it was such a magical place. The happiest cows I have ever seen. They were living on this giant, beautiful field surrounded by fences on three sides…the fourth? Ocean. 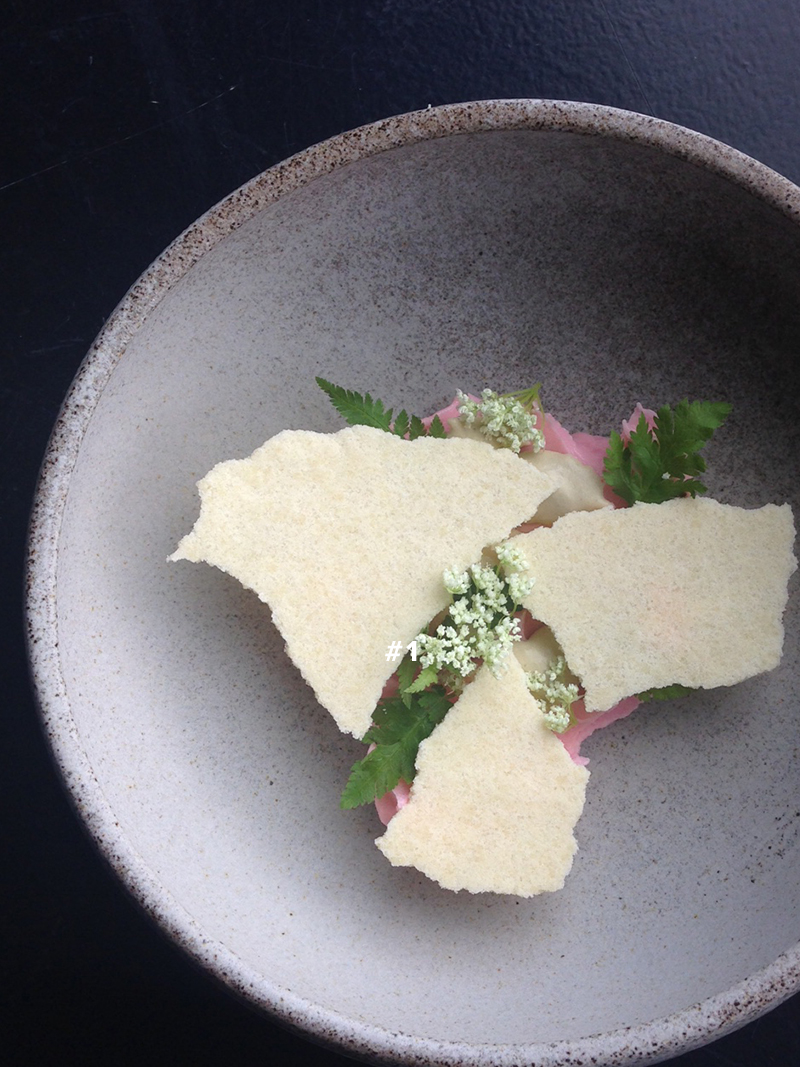 3 things you can’t live without?
1) Mexican food (so glad Rosie [Rosio Sanchez, the former head pastry chef at Noma] is opening her taco spot in CPH.
2) My bike
3) The garden at AMASS

The garden at Amass. © Tim Spreadbury.

What’s next for you and for AMASS?
We are working on a beer project, and that’s all I can say.

Please share with us one tip you have for plating.
I always think about how the guest is going to eat the dish. I personally don’t like it when you have to push elements around the plate to get the right bite. Guests should be able to enjoy the dish without having to think about how they should eat it. Going out to eat is about relaxing and enjoying yourself – not about stressing over the correct way to eat a dish.