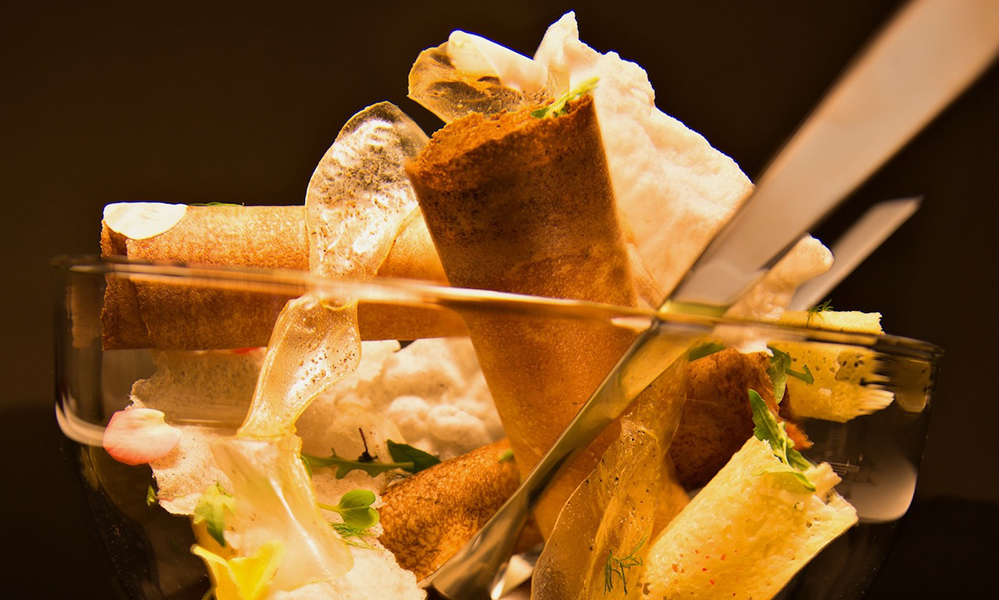 It’s difficult to illustrate the experience at restaurant Ultraviolet. Headed by the avant-garde chef Paul Pairet and located somewhere unknown in Shanghai, Ultraviolet is something you must experience for yourself. Offering a menu to only 10 patrons at a time, the restaurant is designed and tailored with technology to create a fully immersive experience for each person. We had the pleasure of chatting with chef Paul, and learned about his first and favorite cookbook, what the journey of Ultraviolet means to him, and when we can expect Ultraviolet’s 3rd menu.

Born and trained in France, chef Paul Pairet runs two restaurants in Shanghai – Mr & Mrs Bund, a popular modern French eatery offering his style of comfort food, and Ultraviolet, an unforgettable food adventure in an undisclosed location. Guests first meet at Mr & Mrs Bund and are driven to a secret location. Together, they enter an all white room  – white walls, white table, and white chairs – that will soon be filled with different soundtracks and painted with wild 360° projections.

Conceived over the course of 15 years, Ultraviolet is a life-long project and passion of chef Paul, and is “what I can do at my best as a chef,” he says. His goal? To influence, entertain, and challenge.

When and why did you begin cooking?
My interest in cooking started with a cooking book. When I was 9 years old, I received a birthday present, a very important book – “Les Bonnes Recettes de Grand-Mère Donald” – which roughly translates into English as The Recipe Book of the Grandmother of Donald Duck. It was an irreverent book written for children and transgressing the classic culinary codes. I still have the book with me. It is my bible – so to speak. 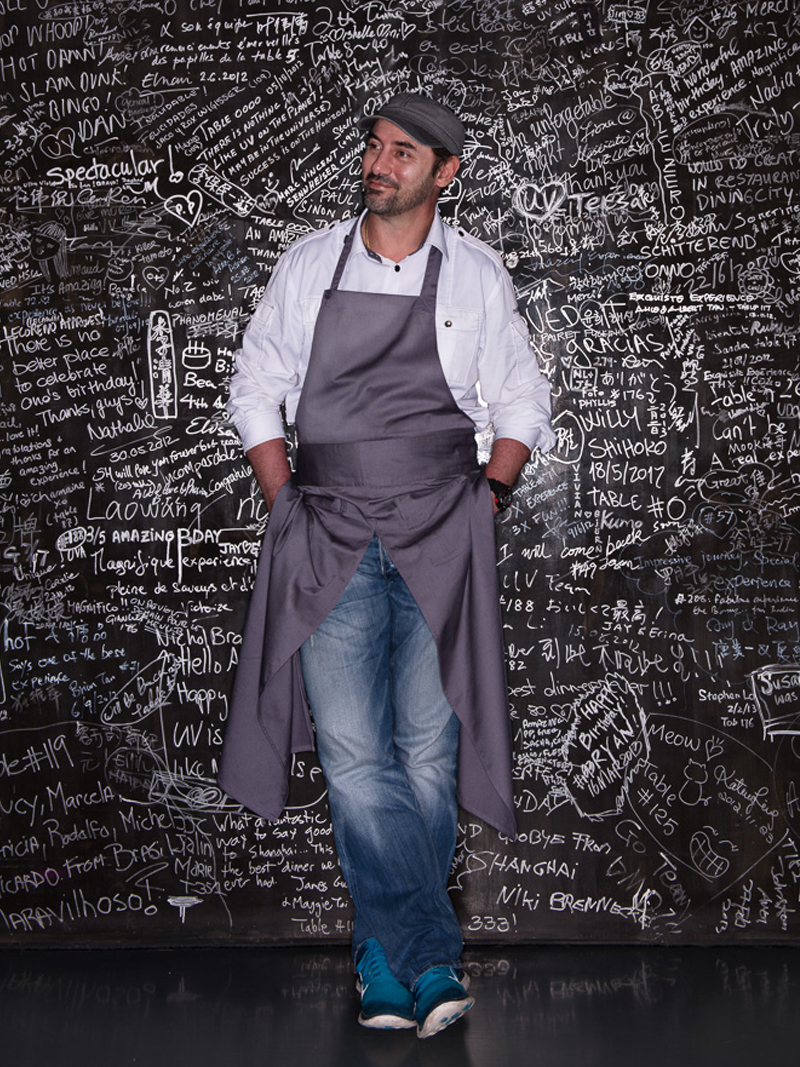 Does your background in scientific studies play any role in your direction as a chef?
All cooking – everything about cooking – is about chemical reaction, a part of science. Every simple action of any chef qualifies as a form of scientific act – adding salt, searing, boiling, peeling, etc.

In my case, there was an interesting turning point – when I just started at a cooking school in Toulouse. My first lesson at the cooking school with a fantastic French teacher named Jean-Pierre Poulain. He put three glasses of water in front of us. In the first glass, there was a whole carrot. In the second glass a carrot cut into slices. And in the third glass, there was a shaved carrot. In the first glass, the water was crystal clear, in the second glass the water light orange, and in the third glass the water was a deep orange.

Just through those three little demonstrations, he was trying to explain to us the importance of the different cuts when it comes to the diffusion between solid and liquid. I thought it was a very interesting approach. Rather than just trying to train us in learning recipe after recipe, we were learning by trying to understand principles. 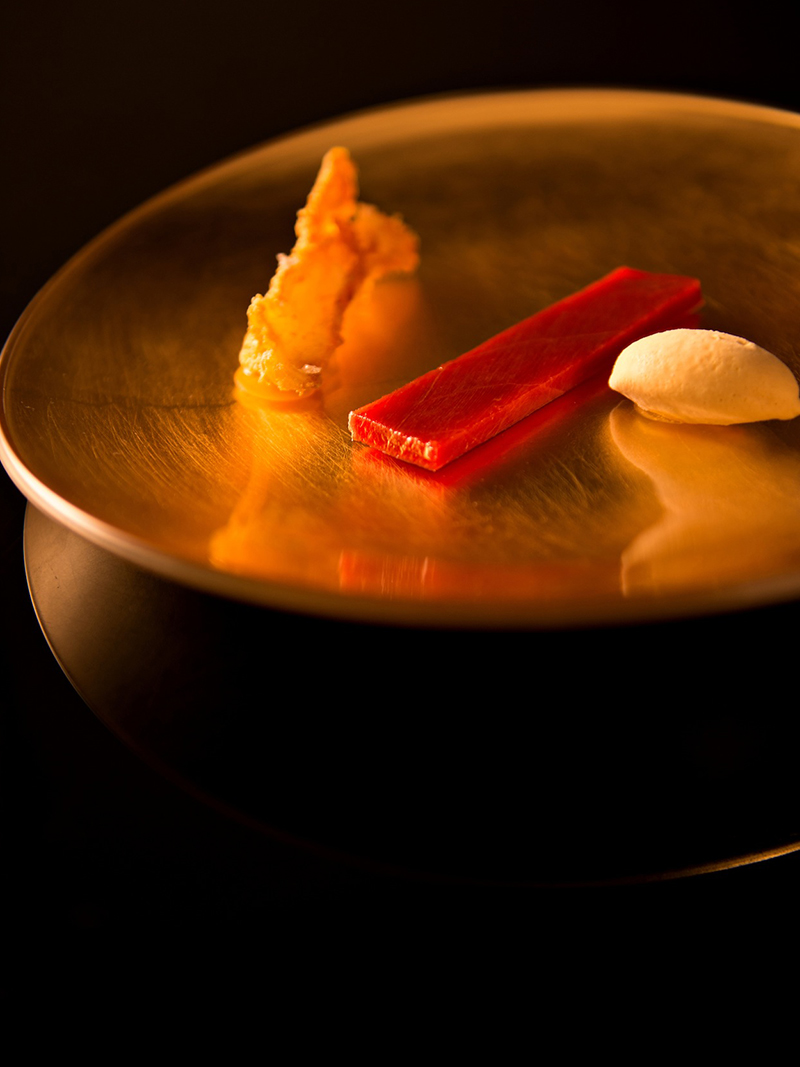 How has the journey been since the opening of Ultraviolet?
The impact of Ultraviolet has been quite overwhelming, since its opening in May 2012. I would have thought that such an unconventional project could have met a stronger controversy. A little controversy has been met, and mostly from people who never experience the restaurant, but voiced a generic pre-conceived opinion of what they think it could be. 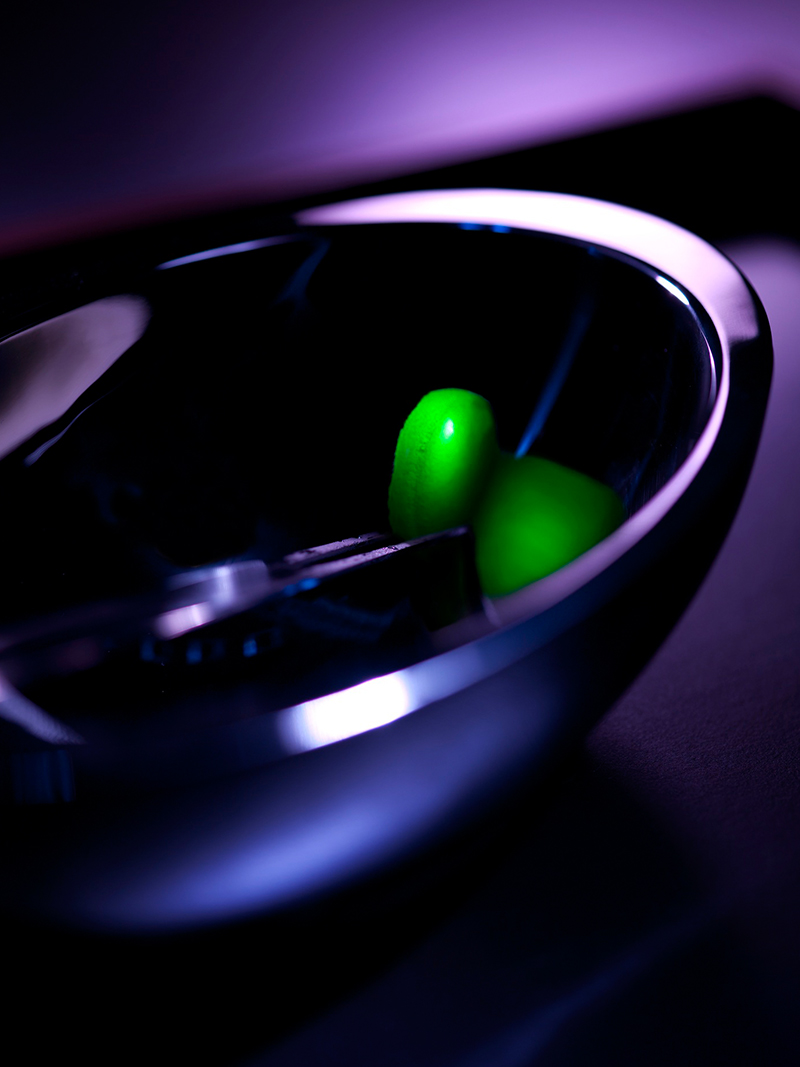 Is Ultraviolet all that you imagined it would be?
I am fortunate to say, it is quite close to what I had in mind. We can always do better if we want. We have been overwhelmed by the impact after Ultraviolet’s opening.

Why Shanghai?
Why not? I came to Shanghai in 2005, to open Jade on 36 for Shangri-La Hotel Pudong. I left Shangri-La at the end of 2008, then prepared and opened Mr & Mrs Bund in April 2009 – with backup from VOL group (who agreed to support my life project, Ultraviolet, at the beginning of our association). My support is here. My team is here. So Shanghai it is. Otherwise, I can say that I stay in Shanghai because of its energy – you can hear it in the air. 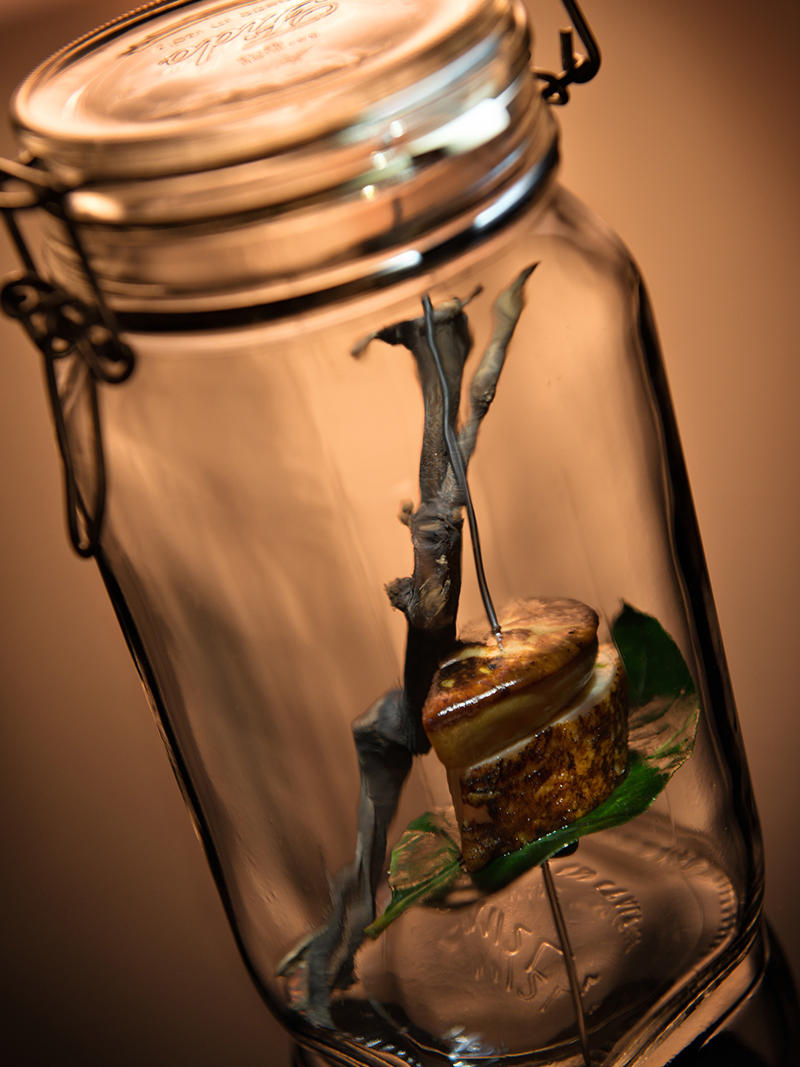 Chicken in a Jar by chef Paul Pairet of Ultraviolet. © Scott Wright/Limelight Studio 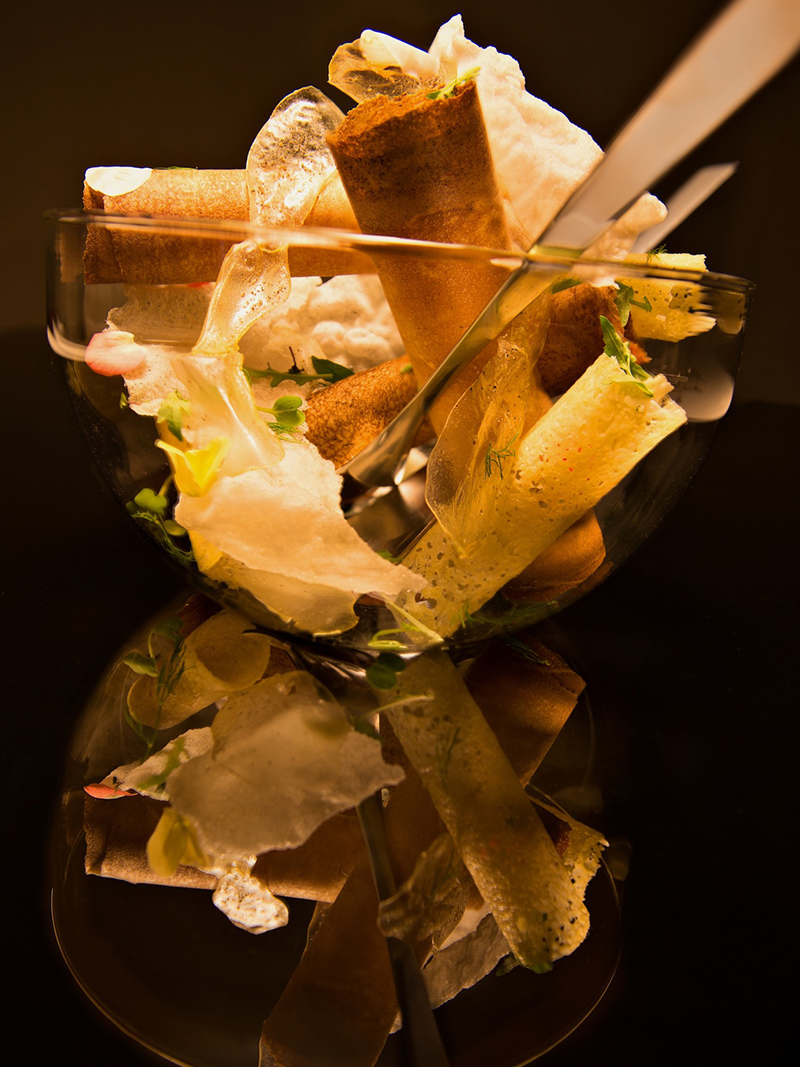 Why did you choose the secret location for the restaurant?
The “secret location” is not the purpose, but a consequence. Ultraviolet is located in an old Shanghainese neighborhood, not easy to reach even for some locals. Plus, the dinner experience has to start for the 10 guests together at the same time, starting from the moment they step into the entrance. And the location is simply not suitable for guests to wait for each other. So, we came up with the idea of gathering the 10 guests first at Mr & Mrs Bund (popular address, easy access, much more convenient especially for foreign visitors/expats). Then, our mini-van transports them to Ultraviolet, making sure the story begins at the same time for everyone. The route goes from the modern Bund area to some of the most unappealing streets. It creates another consequence that people start to anticipate or wonder what’s going to happen.

Since there’s no need for guests to go to Ultraviolet by themselves, Ultraviolet is not a walk-in restaurant. The address is irrelevant – so we don’t reveal. 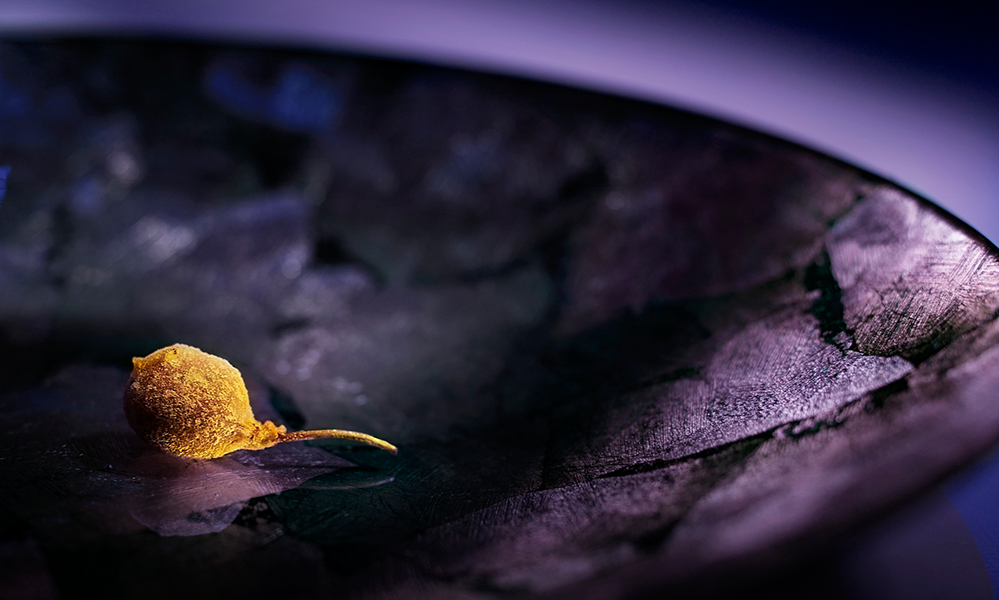 Would you please tell us about one of your favorite dishes served at Ultraviolet, and your process behind it?
“The Twin Concept: Tomato Mozza And Again.” 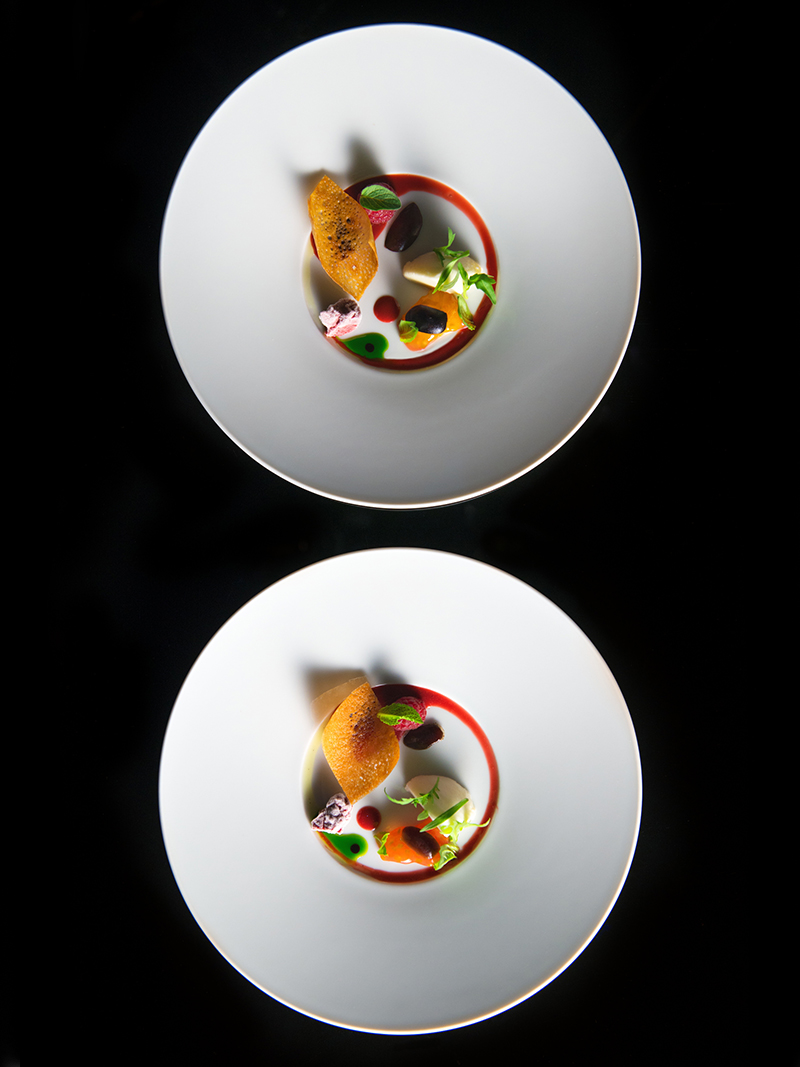 How would you personally compare Ultraviolet and Mr & Mrs Bund?
In short…Ultraviolet is my life project since 1996. It’s what I believe, what I can do at my best as a chef. It’s my author’s cuisine – avant-garde figurative, with flesh and bone. It’s my way to control, to put my “psycho taste” into practice, and to express myself. Mr & Mrs Bund is my first commercial restaurant, where I serve the dishes that I have grown up with and feel like eating on a daily basis. It’s about populist, essential, and simplicity through my own interpretation and how I like it. It’s French, well-traveled, and globally stamped. 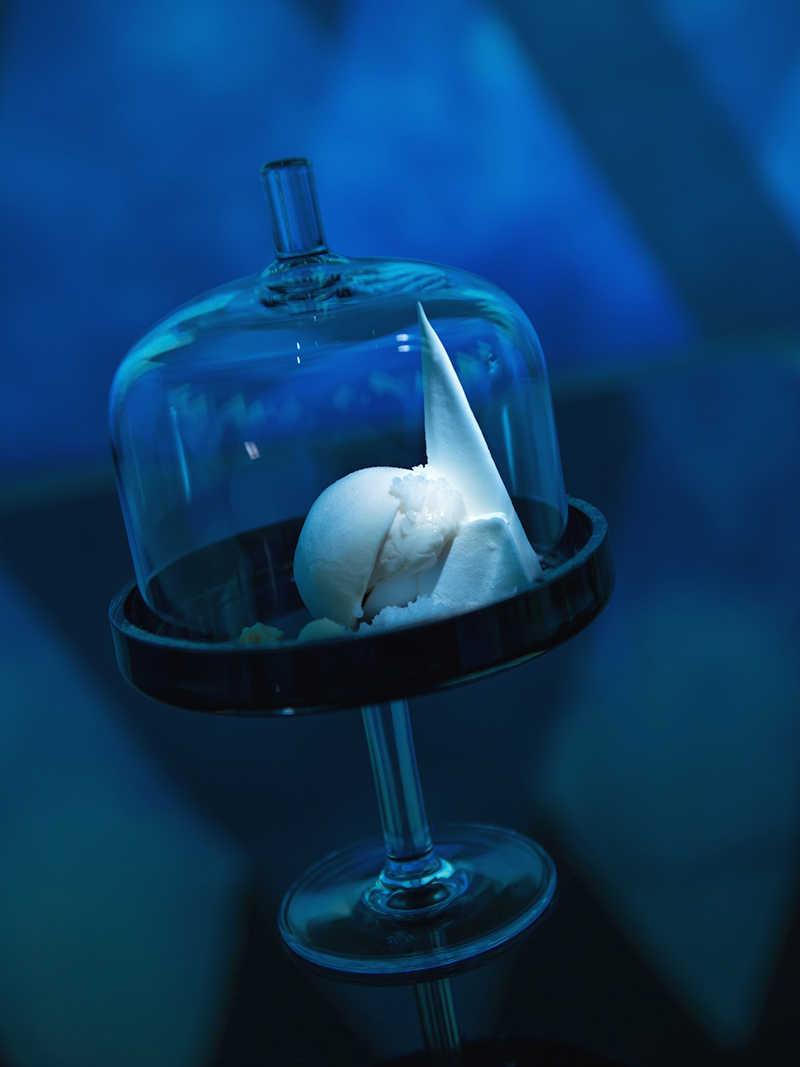 What is your philosophy when it comes to plating?
A dish is ready when there is nothing left to add or take away. A dish could be: interesting, new, daring – perhaps shocking – beautiful, maybe comforting, even funny, but always good. 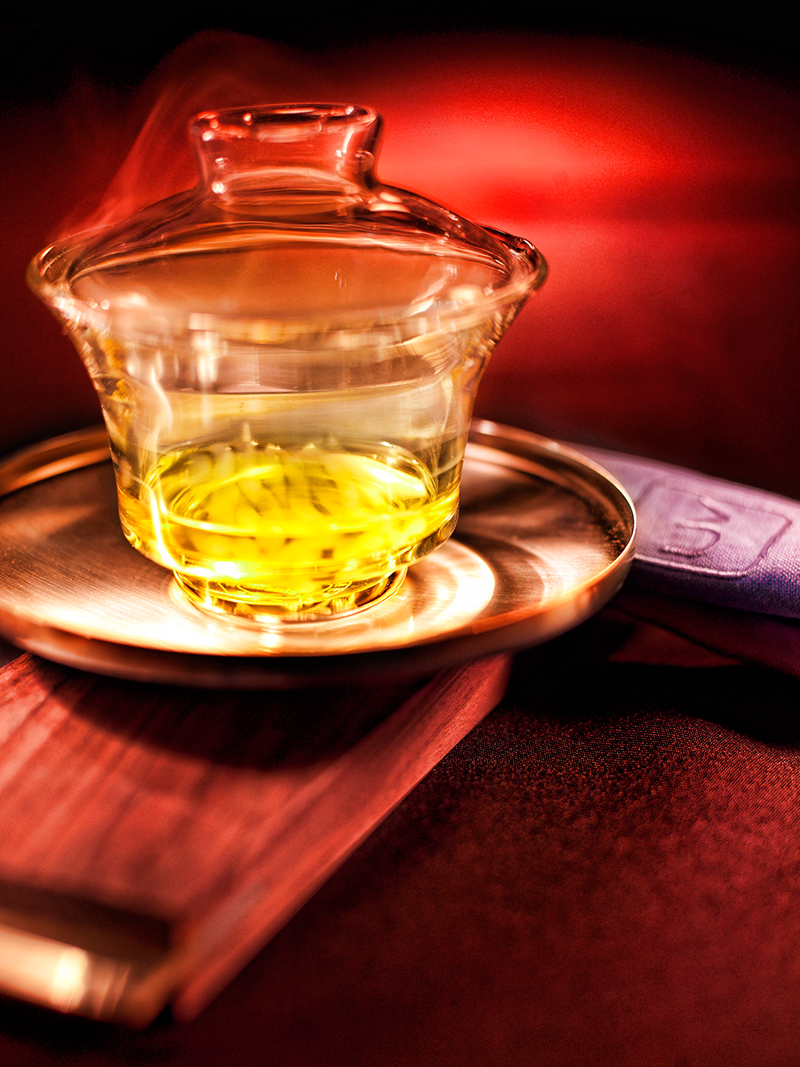 Your most memorable dining experience?
The first meal of Ultraviolet. I had to wait over 15 years to make it happen. A once-in-a-chef’s-lifetime level of enthusiasm and focus – not only from myself, but also from the whole team. 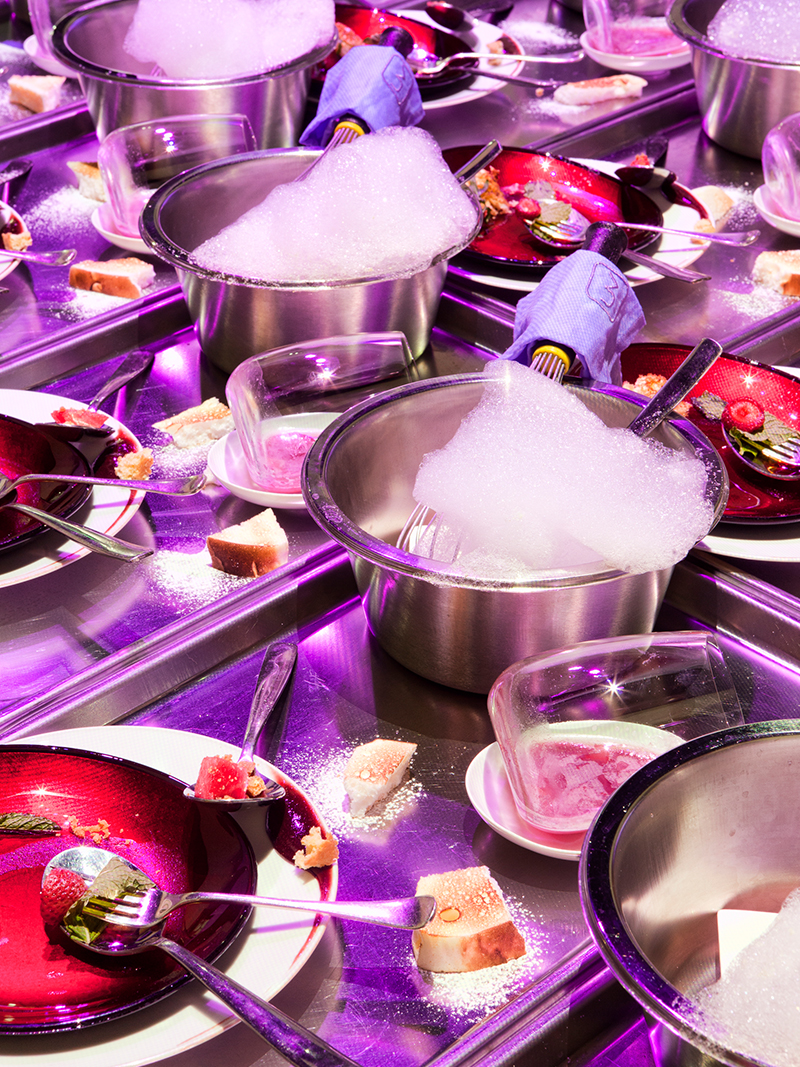 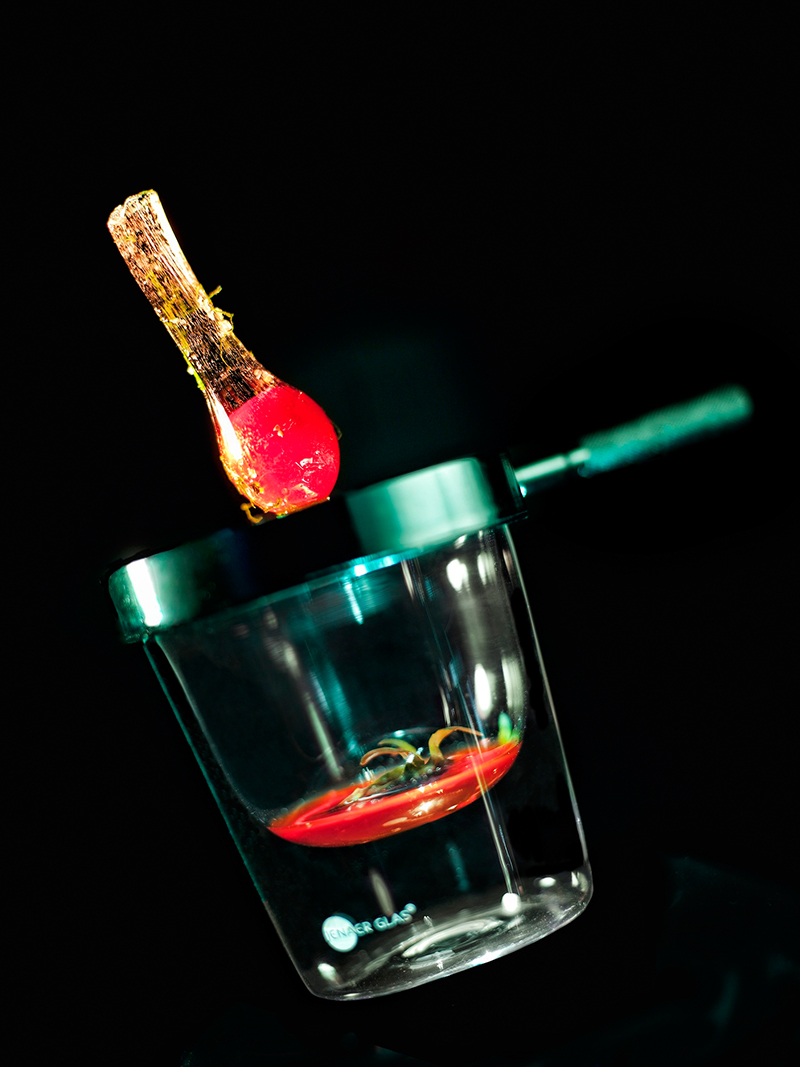 5 things you could not live without?
Coffee, cigarettes, a pair of jeans, t-shirt, cap.

What is next?
The next for me – might open something different, but nothing is set yet. For now, my priority is to finish and launch Ultraviolet’s 3rd set menu UVC. 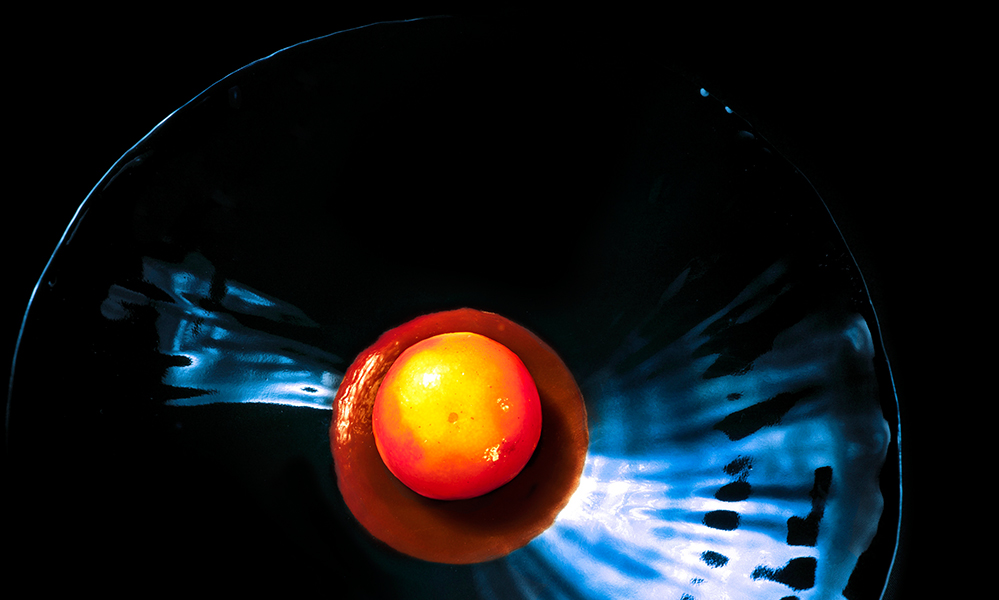 Anything you can tell us about the 3rd set menu?
I can’t say anything about UVC except that it is, again and hopefully, a balanced selection of 20 courses. We hope to launch it before the end of the summer – but we have been late for 2 years. 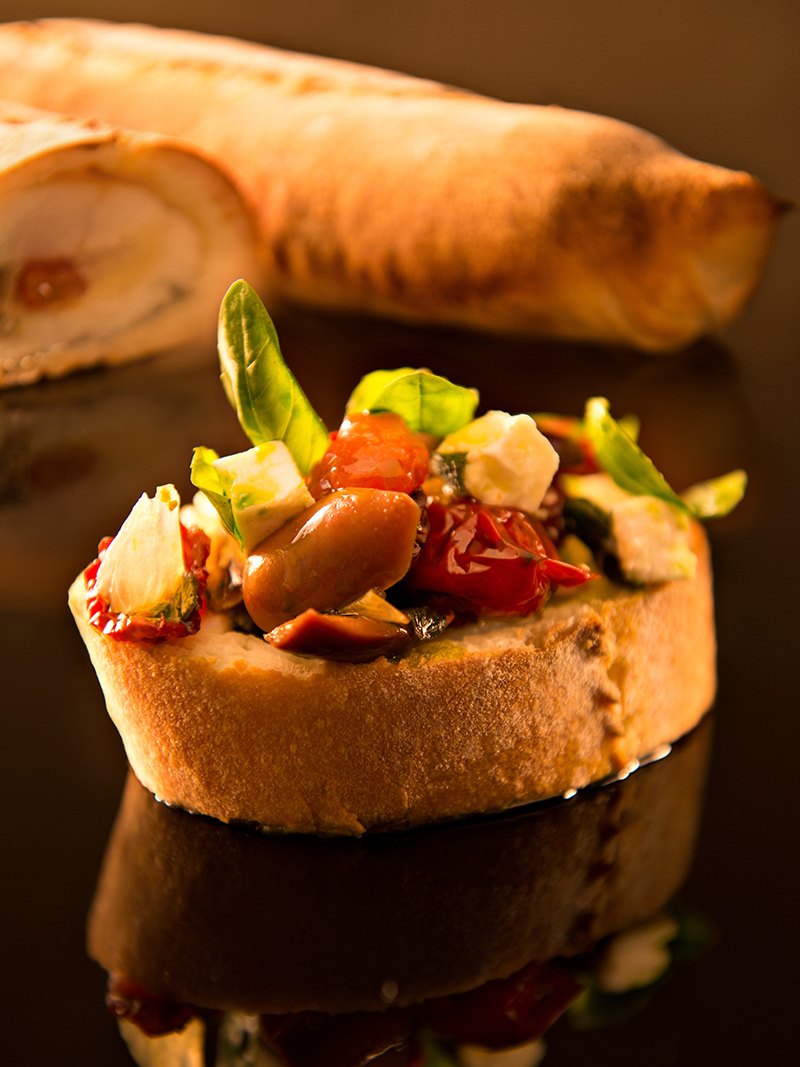 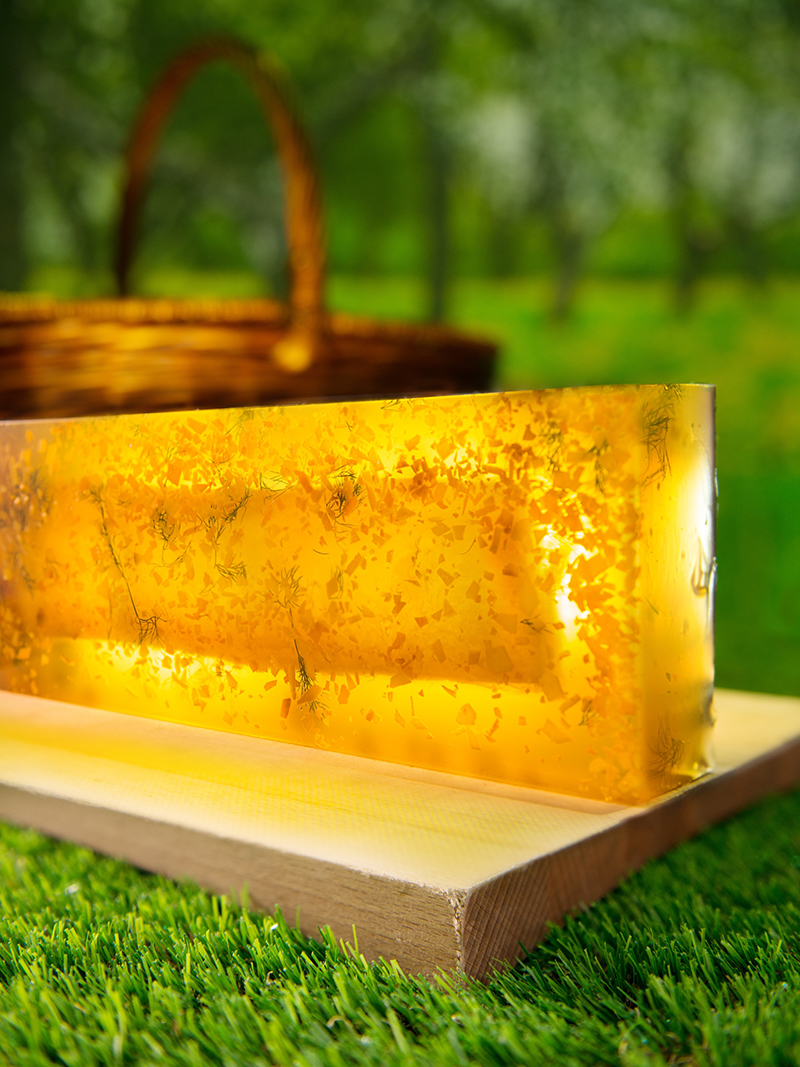 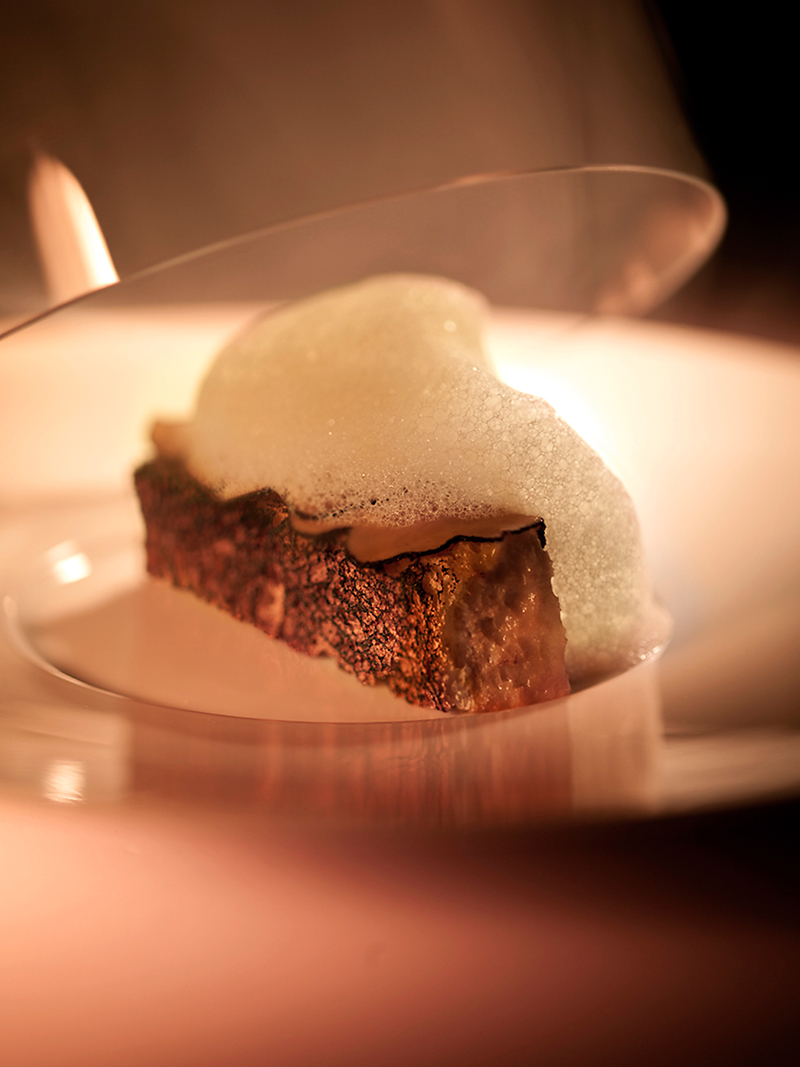