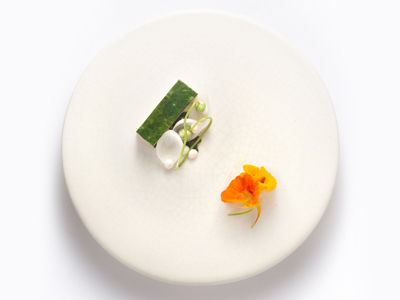 Deconstructing The Plate with Christopher Kostow

Deconstructing The Plate is a series that illuminates the artistry behind signature dishes of some of the world’s most notable chefs. We recently made a trip up to St. Helena, CA to chat with Christopher Kostow, chef of the fourth-consecutive three Michelin starred The Restaurant at Meadowood. In this inaugural feature we deconstructed Kostow’s inventive 2-part cucumber dish: Cucumber Seed Risotto and Cucumber Roasted in Madrone; and captured the plating of his Sturgeon Cooked in Sturgeon Fat.

“We don’t have any signature dish and we try to stay away from having any signature dishes. It can be said that we have a signature style but I’m not going to be the one who deposits that,” admits Kostow. “We never have dishes that we always have or dishes people always come back for. Our goal is to have a certain degree of fluidity. We like the idea of writing everything in pencil because things are going to change and move contingent on the usual forces like the markets and seasons.”

Despite his pledge to not impose a signature dish or style, Kostow is known for creating whimsical, thoughtful, wholehearted cuisine rooted in the Napa Valley. Below is the deconstruction of his deceptively simple, not-so-signature dishes. 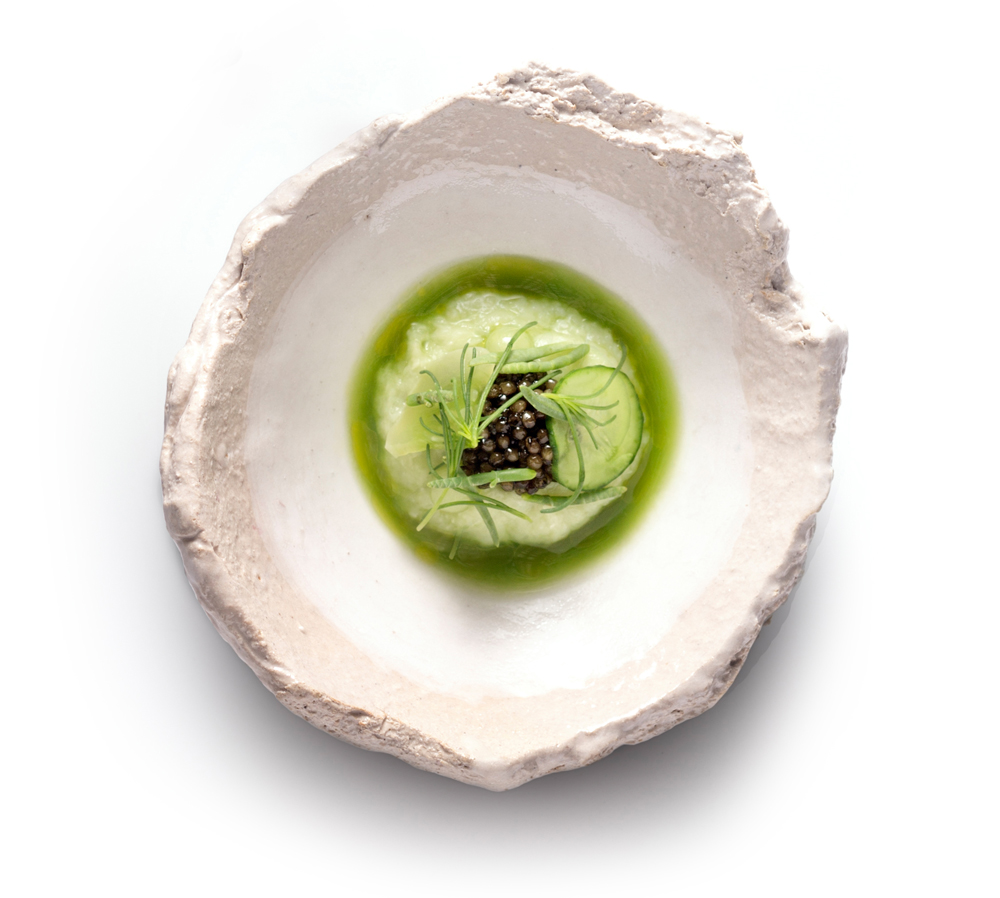 Cucumber Seed Risotto
The Cucumber Seed Risotto is a full bodied dish inspired by Kostow wanting to give his guests a different perspective on the cucumber. Since cucumbers are mostly water, he focuses on the seeds of the cucumbers by processing them. He begins by chopping the cucumber, squeezing the water out to remove the liquid, and then allows it to dry so it becomes the “rice” of the risotto. In place of dairy, Kostow uses cucumber juice thickened with Kudzu starch with an added touch crème fraîche and butter to give it a cool yet rich taste, which he calls the “pedestal of the dish.”

“I thought this would be an interesting dish to do because cucumber is a fruit or vegetable treated to a certain austerity and acidity. What we wanted to do with this dish was apply some degree of elegance and richness.”

Since briny flavors work incredibly well with cucumbers and the risotto’s lactic element, Kostow brings in ocean elements like osetra caviar, foraged coastal grasses and sea beans. Then, to balance the flavors out, Kostow accentuates the cucumber’s natural acidity with pickled cucumbers preserved from the previous year.

When asked about the plating, Kostow says, “The risotto is a dish that’s very elegant in nature with the caviar so we wanted to offset that with plating that’s very rustic. One of our artisan partners, Lynn Mahon, makes these incredibly rustic bowls called knee bowls ­– he actually shapes them on his knees – and that provides a nice counterpart to the elegance.” 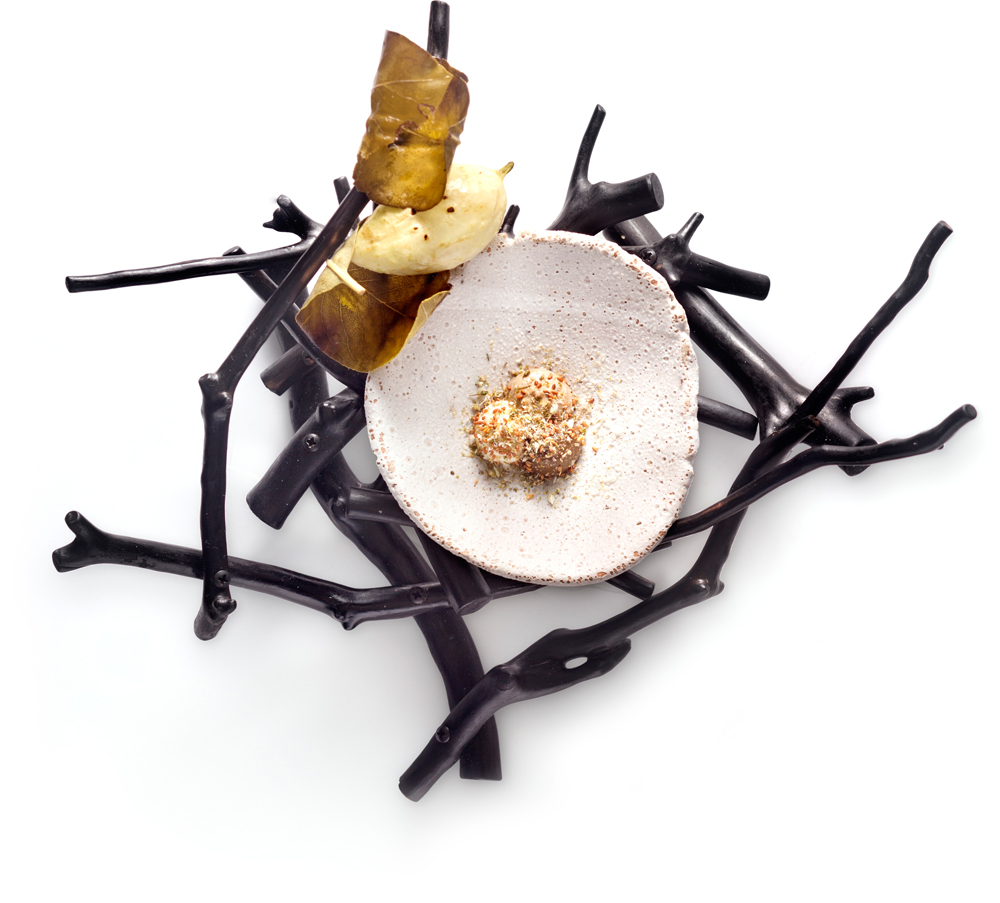 Cucumber Roasted in Madrone
The Cucumber Roasted in Madrone, which is often paired with the risotto, is essentially a cucumber wrapped in madrone leaves roasted over fire. The cucumber is paired with a little vessel of house made Camelina sauce with a puree of charred onion that’s been dusted with toasted wild flax seeds and roasted wild onion flowers. “The jumping off point for this one was really an Everything bagel – that’s what the flavors are reminiscent of. ”

Both elements of this dish sit perfectly on a hand made Ash Madrone wood nest created by a local artist. The artist takes the wood, burns it several times, waxes it, and then constructs the nests out of the smaller pieces of wood.  The beautiful muscular characteristics of the nests lends itself to feel almost primitive, resonating with the way the dish is supposed to be eaten. “We do a lot of dishes you can eat with your hands to get rid of the pretension,” he says. 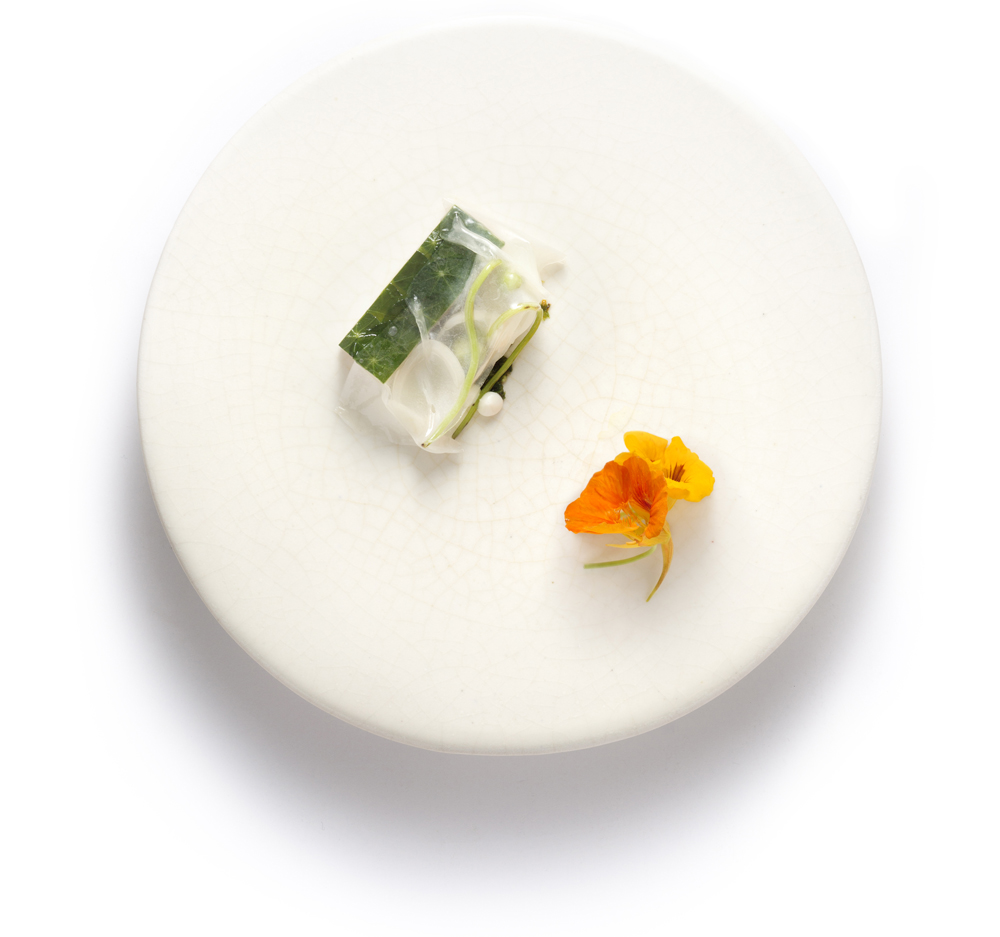 Sturgeon Cooked in Sturgeon Fat
Another bold dish at The Restaurant is the sturgeon dish. Kostow takes sturgeon from Sacramento and layers it with nasturtium leaves. He then flawlessly plates it with an assemblage of onions grown from the garden, takes a paper thin layer of Sturgeon fat and covers the elements, then torches the entire thing so the fat begins to melt. “The sturgeon has very big flavors and it’s actually cooked in it’s own fat. […] Very simple but super, super vibrant.”

Like the other dishes, the sturgeon is plated very simply, yet quite dramatic as its’ various components are emphasized by the small details and vast white space of the plate. 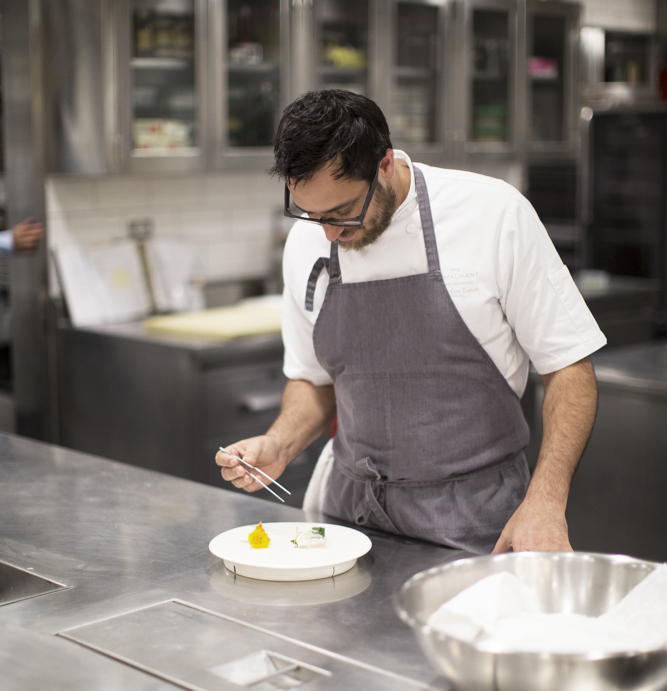 Chef Christopher Kostow plating the sturgeon dish in The Restaurant at Meadowood kitchen.

“There’s a certain degree of humor in the whole thing,” Kostow explains when asked about the experience he wants his guest to have. “It’s interesting and fun. You eat with your hands. It’s not being silly. It’s rather doing things with a wink to engage the guest a little bit.”

But don’t be fooled by Kostow’s praise for playfulness, he takes his food very seriously. From the types of produce grown and picked daily in the Meadowood Culinary Garden all the way down to the vessel the food is served in – every single detail is thought through. 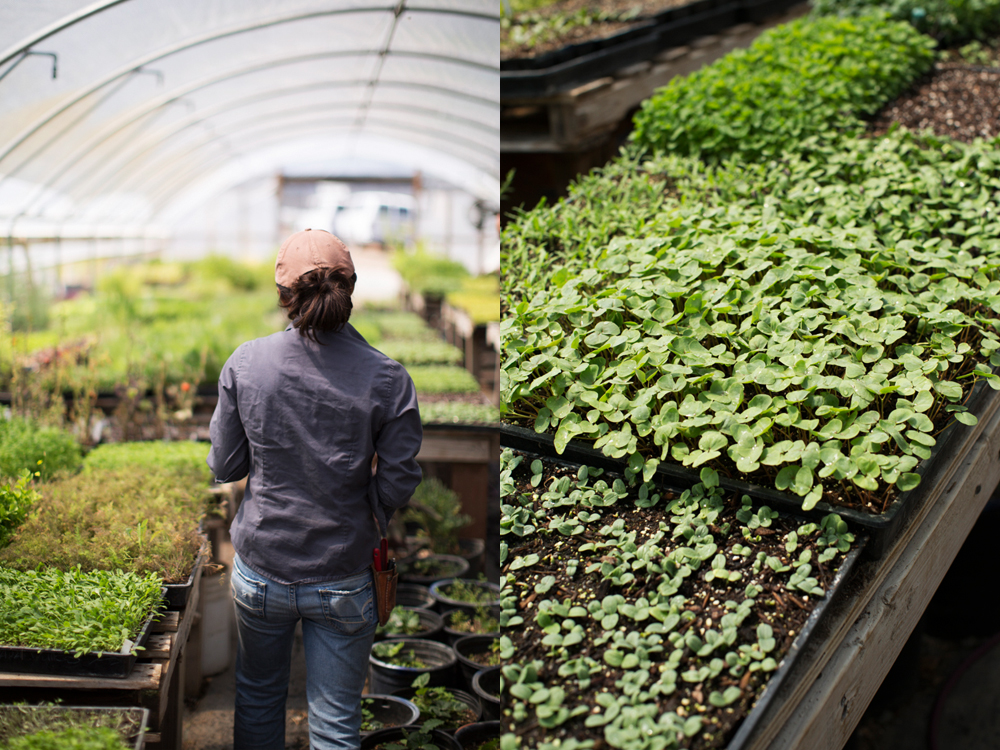 Aesthetics aside, the true beauty of Kostow’s dishes lie with the fact that his food and platings are motivated by functionality.

“When I conceptualize a dish, I never think, ‘this dish needs more red.’ I think if the dish is beautiful, the ingredients are well prepared and done, and you plated it correctly, then it’s beautiful. With our platings, it’s not a lot of fireworks. We work with a lot in terms of functionality. We’ll never say, ‘the chef recommends you eat it like that.’ I would never say that. As an idea, that just drives me crazy that a chef has to tell you how to eat something. We’d rather spend time plating it in a a way where the guest inevitably eats it the way we want it to be eaten. So that’s why you’ll see more of our platings a little bit more compact. Everything should be in every bite – without instructions.”