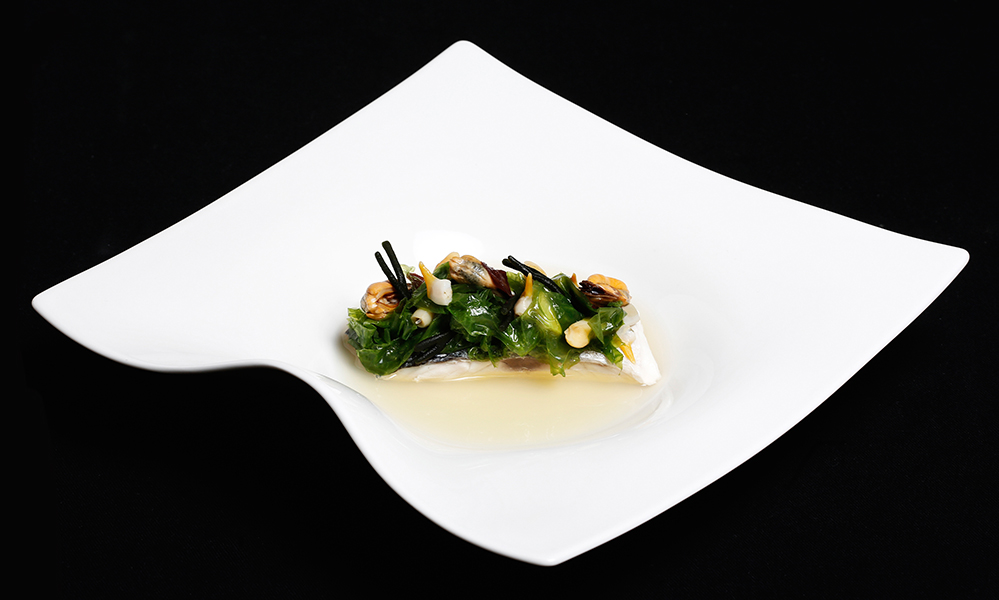 Dip in the Sea by José Avillez

Since reopening in just 2012 under chef José Avillez, Belcanto is the first restaurant to win 2 Michelin stars in Lisbon, Portugal. Staying true to and revisiting the roots of Portuguese cuisine, chef Avillez shares with us one of the most emblematic dishes of his career – “Dip in the Sea” with sea bass, seaweed, and bivalves (mollusks).

Some words from chef José on the dish:

“One of the most emblematic dishes of my career – and one of the most sought after at Belcanto – is the “Dip in the sea.” I created this dish in 2007, and, interestingly, it was initially called “Sea bass in sea water, bivalves, and seaweed.” However, when people savoured it, they told me it was like “taking a dip in the sea.” They did it so often, that I ended up changing the name of the dish on the menu.

I grew up in Cascais, and my favorite beach is Guincho, where the Atlantic reveals all its power. Portugal has nearly a thousand kilometres of coastline, and we have some of the best fish in the world. Inspired by my experiences and by our gastronomic traditions, I created a dish where I wanted to portray the purity of the flavours and to pay tribute to the texture of the fish in its wild state.”

Place the sea bass (sealed in a sous-vide bag) in a bain-marie heated to 54ºC (129.2ºF).
Heat the bivalves (mussels, cockles, razor clams), the sea lettuce, and the tosaka in a sea water steam.
Heat the 100ml of sea water (the mussels broth) in a saucepan to 80ºC (176°F).
Before plating, taste and season with three drops of lemon juice.

In a deep dish, place the sea bass fillet at the center.
On top, put the sea lettuce and all of the bivalves (mussels, cockles, razor clams), without overlapping them.
Also place the tosakas, the sea grape, and the codium.
Pour some sea water onto the bottom of the dish and also on top of the fish.

“Dip in the Sea” by chef José Avillez of Belcanto in Lisbon, Portugal. © Paulo Barata