Honesty, innovation and hard work are three concepts chef Dan Graham is very familiar with. At Michelin starred restaurant Pidgin, where he is the head chef, they offer a very inventive set four-course menu that changes every week. We had the chance to discuss culinary inspirations and influences with Dan in east London, where Pidgin is located.

How did you become interested in food?
I have always been into food but it never struck me as a career. I trained as an architect. I did that for seven years. Towards the last couple years of that I stumbled across restaurants like elBulli and I realized that food can actually be something creative, quite intellectual, and that appealed to me and I became more and more obsessed. I spent my days off cooking from books, reading and studying, so I thought I would give it a go.

What are your inspirations when it comes to presentation?
There is so much visual culture, we are overloaded with it. I am always looking at Instagram – that provides a bit of inspiration – the produce itself, and then we really think of how everything eats – literally how you take what bit from what part of the plate. If everything falls apart, that encourages the diner to try everything individually, but if we want everything to be eaten as one, we put it all tight together, but then we put different elements in different places so that not everything tastes the same. We also do crazy things like “we want a dish to look like this” and then design the dish based on how we want it to look and that influences the flavours and elements and what we put in it.

I wouldn’t say we have a specific style, or maybe we do, but the inspiration always comes from a different place. 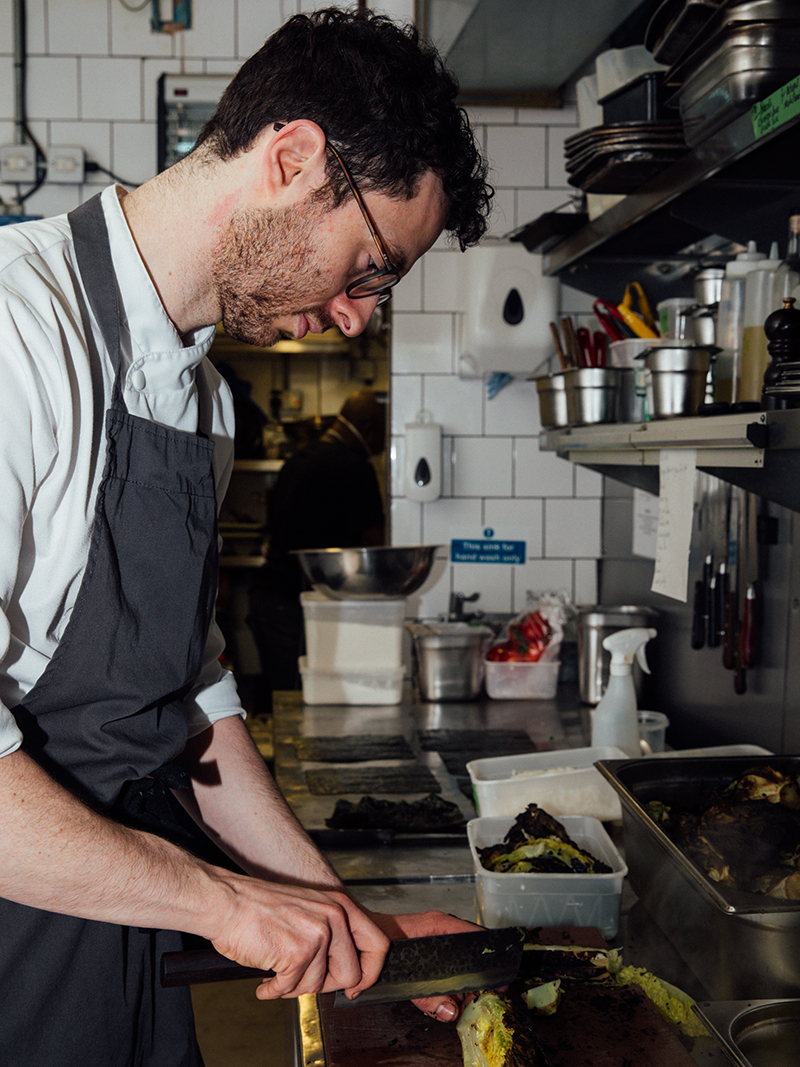 What is the process like for designing your weekly menu?
It is typically the two bosses, Sam and James, me and a sous chef, if I have one at the time. We sit down and everyone brings ideas to the table – always very different because everyone is very different. It’s really team work built up in an understanding of each other.

There will be dishes that are relatively fully formed, but a lot of the times there might be this ingredient in season, or maybe a supplier told us about a really nice product we want to use and maybe we build an entire dish around it. This forces you to get outside of your comfort zone, because you would never come up with it otherwise.

The name Pidgin is not because we can’t spell, it’s based on the language. Pidgin is when two languages come together and create a new language. It’s actually the perfect name for what we do. We take all the different cultures, smash them together and come up with something new.

We are not too fussy in the way we dress; at the very least it looks appetizing and interesting. We often use presentation as a driving force for the creativity in flavours, but it all relates to how it eats. We have never done a dish that looks really nice but doesn’t deliver in flavour.

1.  Think about how the customer is going to eat the food based on the way you put it on the plate, how each element comes together.
2.  Consider the importance of leaving space on the plate.
3.  We use the same style of plate for every course, so it is very much like we have a white canvas that we work on
4.  Have an understanding of geometry on the plate, like dividing the plate into quadrants.
5.  Understanding that random isn’t random. When chefs try to plate randomly it looks really forced. If you study randomness, you see that there are little patterns.
6.  You need to understand the character of the dish.

Are customers more demanding after the Michelin star?
Before, it was people coming in and not necessarily expecting very much, and we would blow them away with the quality of what we were doing and the prices we were doing it at. We got the star and people have slightly different expectations.

We are not a traditional Michelin star restaurant. We are not fussy service-wise and the food isn’t traditionally Michelin, but I think Michelin awarded us because they saw that we provided a great experience to the customers and that’s what it’s about. We don’t have a traditional Michelin clientele. We get more people coming in for special occasions. It’s really nice and it’s a relaxed atmosphere, but I do think that the quality of what we do stands up to any Michelin star restaurant in London. If you look at all the reviews we have, they speak to that. We are the highest rated Michelin star on Trip Advisor in all of London. We don’t want the clientele to change. We still want to be a local restaurant.

Is the spirit of the supper club still present?
It is a bit. It’s very casual. In the kitchen, we are cooking for the guests. We are always happy to talk to guests, we have regulars coming back. I like the interaction, because it reminds you who you are cooking for. It keeps you honest. You can’t throw out food that isn’t good ,because if you know it is not good you have to look that person in the eye. You can’t do that with integrity.

When it comes to plating, have you had any mentors throughout your career?
In restaurants, everyone teaches you how to plate their food. Every head chef you work for kind of teaches you. From the start, I have always been good at plating. It comes from my background. I think it’s about paying attention when someone shows you something, understanding the relationships, and analyzing exactly what they are doing. You need to break it down and map it out so that you can recreate it.

I feel lucky I have been able to work with really good chefs that have been good at explaining things. At Dinner [by Heston] the plating was pure perfection. At L’Autre Pied it was very messy and loose, everything looked great and it was a style that really worked for that kitchen, very natural. At Odette’s it was more about how a dish eats when you are plating it.

How is an average day for you?
We are quite different from other restaurants because of how we structure the menu. For us, Tuesday is the hardest day because that’s when we are bringing the new menu – that’s very stressful and difficult. Monday is a bit of a prep day, Tuesday is probably the most chaotic day, we do a tasting and then go straight into service. We have a very solid way of working, so it almost works out pretty perfectly the first time, maybe tweaking a bit of seasoning, acidity, etc. By the time you get to the end of the week it’s easier because everyone knows what they are doing at that point so it should be pretty smooth.

Do you have any rituals throughout service?
Pre-service coffee, pre-service playlists (laughs). It’s such a small kitchen that it would be really dead otherwise. So, we have a pre-service set list that everyone in the kitchen contributes three tunes to it, so it’s something to get you going. The way is timed, is like when it comes on for example, it’s a reminder to make sure you the barbecue is lit.

Do you think restaurants will be more sustainable in the future?
To be honest, no. If we are talking specifically about London, there is not physically the space to do a lot of things. It’s very hard to get the infrastructure. A lot of sustainability depends on the long-term programme, so it’s a lot of heavy investment upfront, which will then pay off later. In London, where everything is so temporary and where your landlord will high your rents up, you can’t afford to invest in those things. Most restaurants in London are small restaurants.

If people change the way they want to eat, then restaurants could change the way they are structured to become more sustainable, but it’s part of the food chain. Chefs have the power to influence the food chain – Dan Barber has changed public opinion, but it’s very complicated. Fundamentally eating at restaurants is more efficient and sustainable than eating at home because the waste is significantly less. 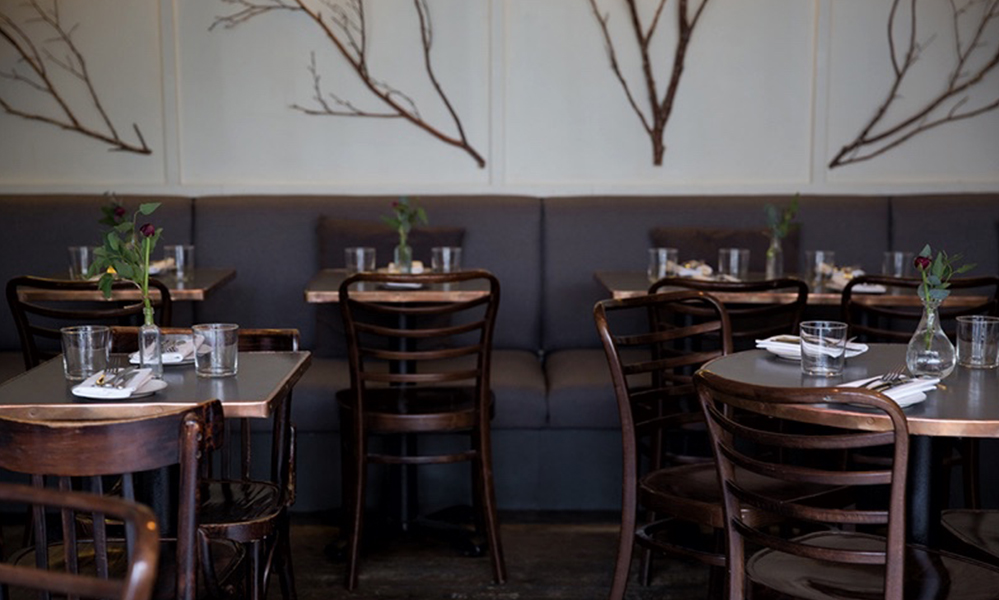