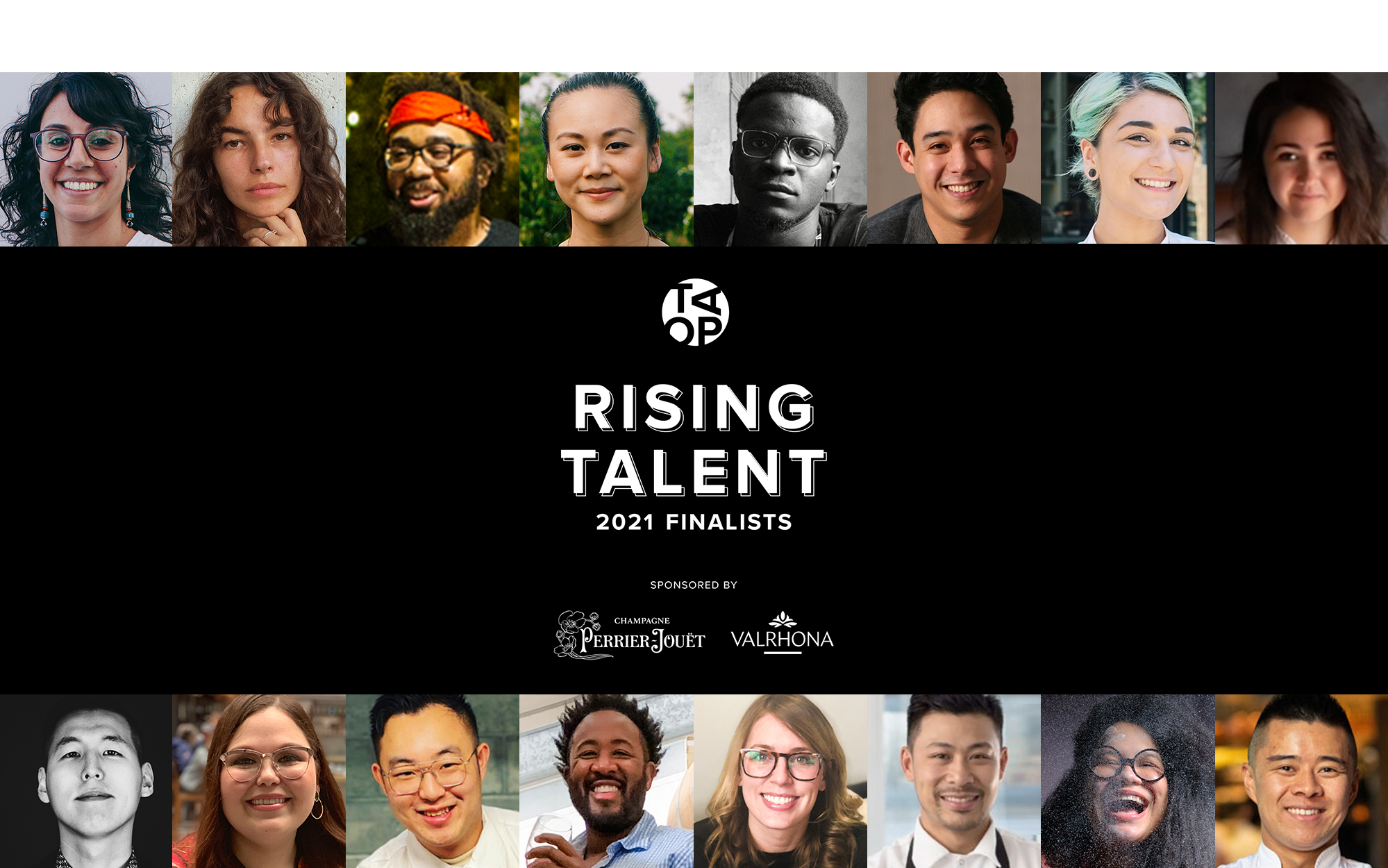 Over the last year and a half, the hospitality industry as we know it has been irrevocably transformed. The pandemic led to mass layoffs, business shutdowns, and food shortages—it was a dark hour for an industry that thrives on in-person interaction and social connection. But from adversity and loss sprang hope and innovation—either out of necessity, desire or crisis response—so many people found ways to keep going. Many pivoted their existing businesses while others launched entirely new ventures or finally had the space to pursue their dream career. In this spirit, it’s especially fitting that The Art of Plating Rising Talent Awards are back in 2021, celebrating young leaders in the food and drink world.

These 16 Finalists along with 1 On The Rise have been carefully selected by an all-star Committee that includes pastry chef Dominique Ansel, sommelier Jordan Salcito, chef Nina Compton, hotelier Amar Lalvani, restaurateur Brian Canlis, chef Dominique Crenn and The Art of Plating’s very own, Maria Nguyen, with diversity and inclusion top of mind.

The list includes first-time entrepreneurs, seasoned pastry chefs, wine professionals, and bakers turned social activists, representing many different backgrounds and in many cases, countries around the world. Brought to you by both Perrier-Jouët and Valrhona — two brands that have aligned with The Art of Plating in their commitment to support next generation talents — we are proud to present The Art of Plating Rising Talent 2021 Finalists.

With a family background that includes both artists and cheesemakers, Motz had a singular goal for her career and life early on: to create. She enrolled in culinary school at age 18, and began working at award-winning restaurants in her early twenties. Now, at only 31 years old, Alexandra Motz leads the pastry program at one of Minneapolis’ most lauded restaurants, where she challenges her diners’ Midwestern palates (think peanut butter semifreddo and beeswax ice cream) with every dish. She’s also a prolific painter, often drawing inspiration from her pastry work, in her spare time. 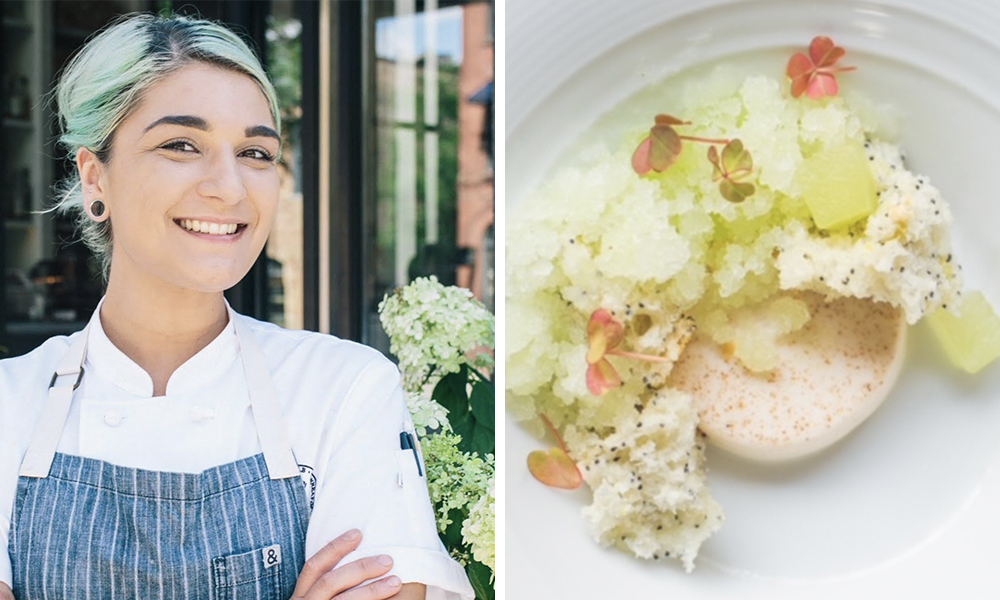 While chef Ana Castro may reside in New Orleans, her heart will always be in Mexico City, where she was raised on her grandmother’s cooking. It’s this inspiration that fuels her creativity at Lengua Madre in New Orleans, a tasting menu concept opened in 2021 that fuses together her travels (including stints in India and Denmark), Mexican family recipes, and local Southern influences with a contemporary twist. Castro was recently was named one of Louisiana’s Cooks to Watch in 2020.

With a resume that includes Michelin-starred eateries like Bouley, Atomix and Eleven Madison Park, Arnold Byun was at the top of his game prior to 2020. But the pandemic left many in the industry in a tailspin, including Byun who relocated from NYC to LA without a job or friends. Soon after he launched collaborative-friendly NAEMO, a pop-up concept that puts Korean culinary traditions center stage (elevated dosirak lunch boxes, tea and dessert offerings and more). He’s also the founder of With Warm Welcome, which hopes to amplify Asian American voices with a podcast, posters, Baker’s Box, and much more. 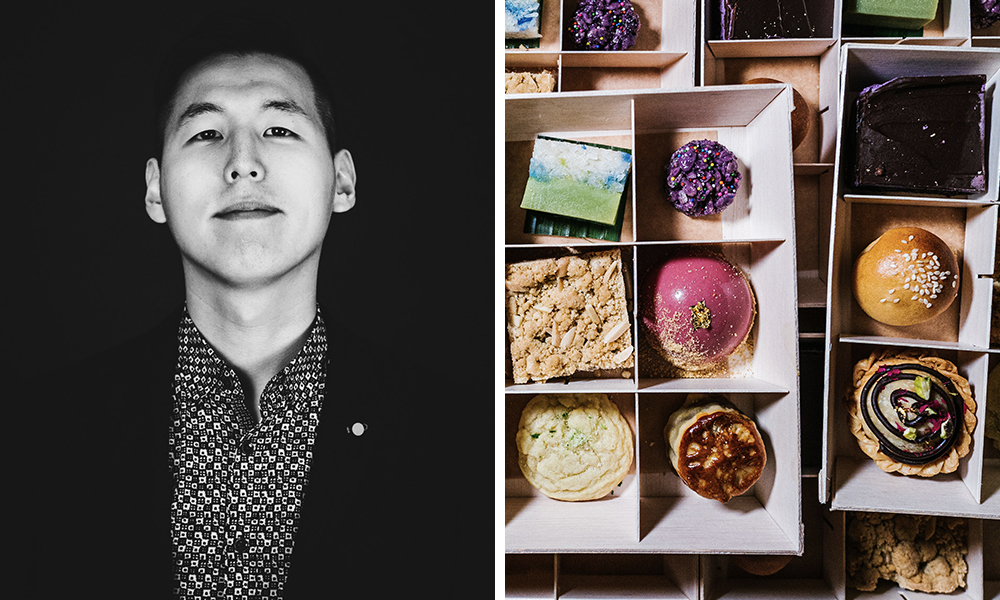 From her home in Salt Lake City, Utah, Carolina Gelen has built an Instagram following of 388K since launching in January of 2020. She’s now a resident at Food52 and has created recipes for New York Times Cooking, among others. Hailing originally from Romania, Gelen studied computer science and worked in tech but was dissatisfied with that career path, ultimately returning to her culinary roots (she won a Jamie Oliver food competition at 16) via social media. On her blog, YouTube, and Instagram channels, she shares inventive takes on comfort food classics such as pumpkin vodka sauce and funnel cake fries with her enthusiastic followers.

After trading a medical career for the pastry kitchen, NOLA native Elizabeth Tilton has never looked back. She moved to NYC and worked at companies like the Momofuku Group and W&P Design, but returned to NOLA in 2019 to found Oyster Sunday, a consulting group for independent restaurants and food brands. Providing everything from expertise on branding to marketing and finance, the company launched shortly before the pandemic. When March 2020 came, without blinking an eye, the company suspended all retainer payments and offered free consulting to any operator. Over the last two years, Tilton’s company has helped open concepts from restaurants to pop-ups to boutique hotels in New Orleans, NYC, and Cincinnati. 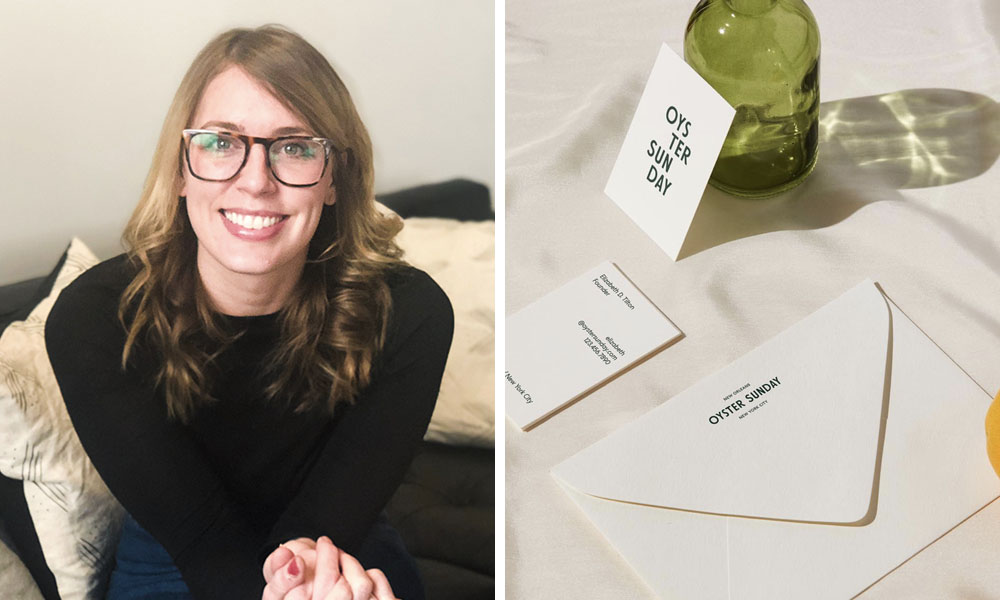 Jhonel Faelnar stumbled into the beverage industry after taking a restaurant job in NYC, but went on to become a sommelier graduating at the top of his class years later. He worked at highly lauded restaurants NoMad and eventually the acclaimed Atomix as Wine Director. When the pandemic struck, Faelnar founded F.O.R.K (friends of rural kids) with board members at the ARK Foundation to help provide meals to healthcare workers in the trenches of the early COVID surge. Originally from The Philippines, Faelnar later founded a series of Zoom wine gatherings to support local communities in challenged areas of the country. 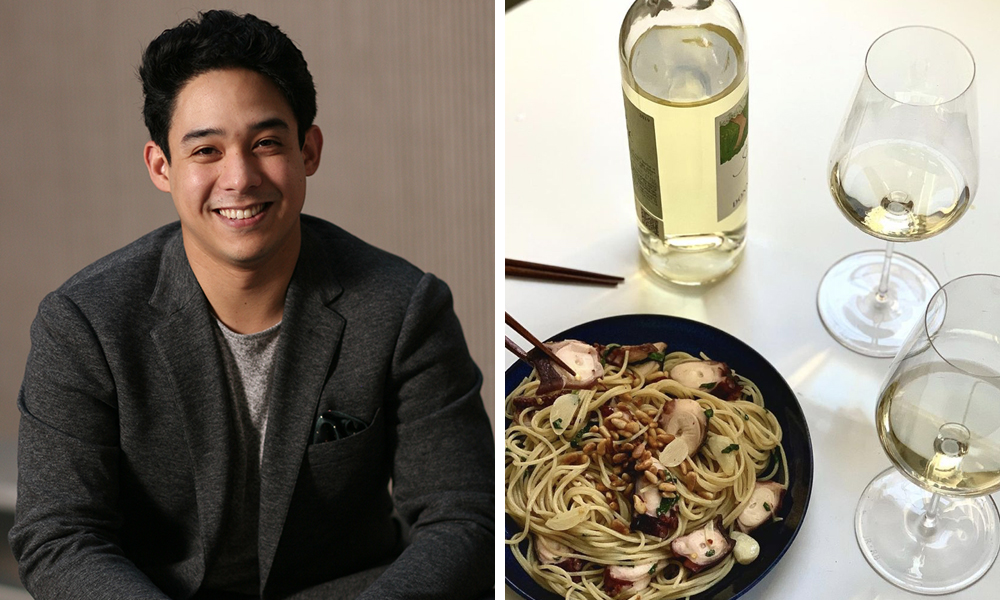 Kimberly Conroy cut her teeth at some of Boston’s top restaurants including Menton and the now-closed Clio before moving to San Francisco. Setting a goal to become the pastry chef at a Michelin-starred restaurant by the age of 30, she hit it by age 26, after being promoted at hotspot Lazy Bear to the position within five months. Keeping the restaurant open during COVID was no easy feat, but owners managed to pay all its employees and provide health care, to Conroy’s relief. In the future, she hopes to open a bakery that also supports women who are victims of domestic violence. 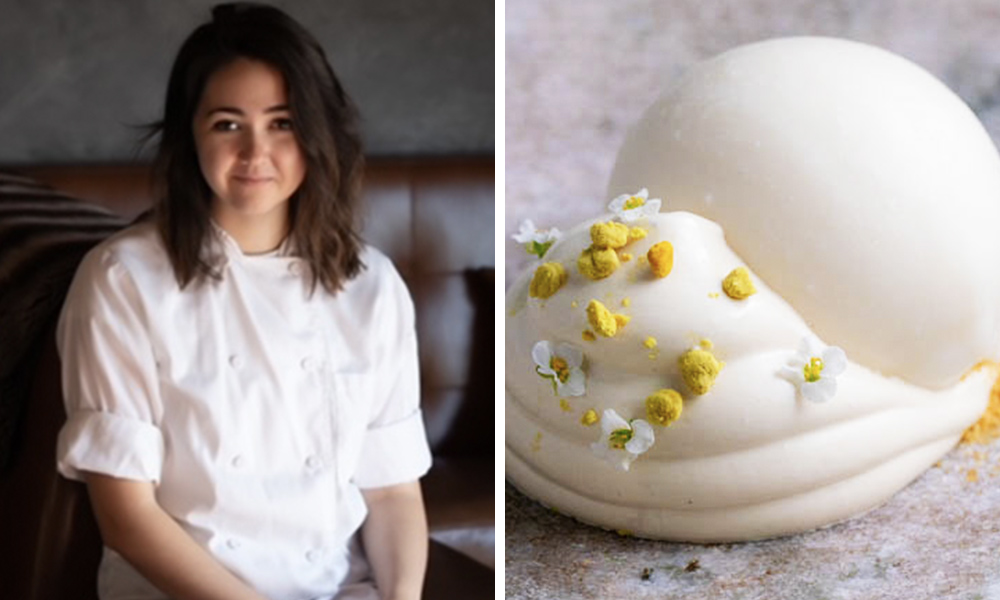 Prior to the pandemic, Philly chef Kurt Evans hosted a series of dinners called EMI with the goal of ending mass incarceration. But he doubled down on his social justice moves during 2020, launching Everybody Eats, a mutual aid organization that combats food insecurity. More recently he founded Down North Pizza, which only hires formerly incarcerated individuals and pays them a fair wage to make its Detroit-style pizzas, wings, and more. He hopes to one day launch a business accelerator for formerly incarcerated food entrepreneurs. 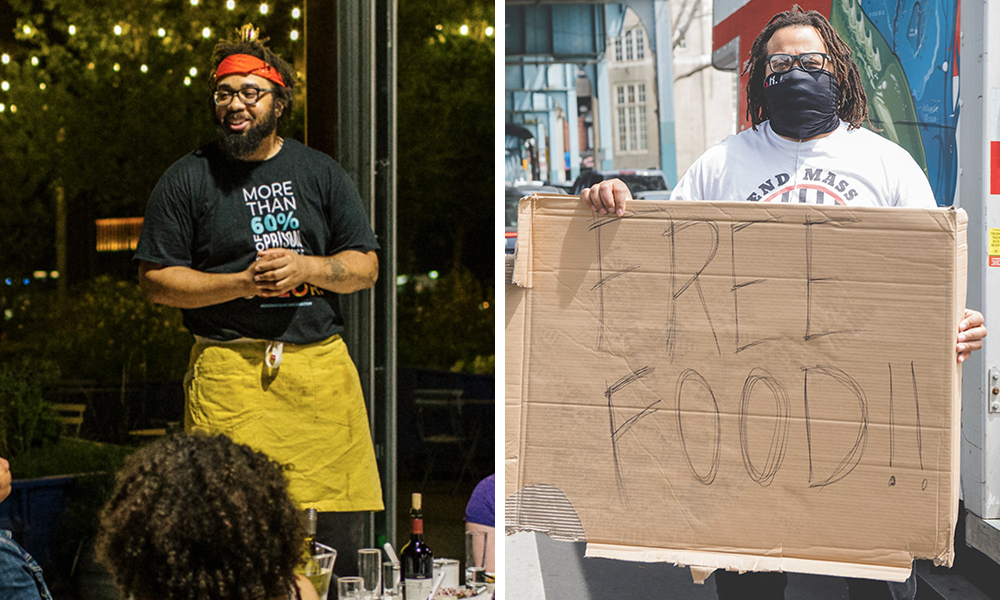 Having fled Lebanon during the refugee crisis, a feeling of helplessness inspired Kahi to eventually do something about it years later in NYC. In 2015, she founded Eat Offbeat to help promote the food and culture of refugees and immigrants from countries like Sri Lanka and Venezuela, as well as to provide jobs to the same group. Operating mostly as a B2B catering business, during the pandemic Kahi pivoted her business to repackage some of their best sellers into Meal Boxes, available directly to consumers. Kahi continued to grow the business outside of NY by offering a line of shelf-stable treats available for nationwide shipping. 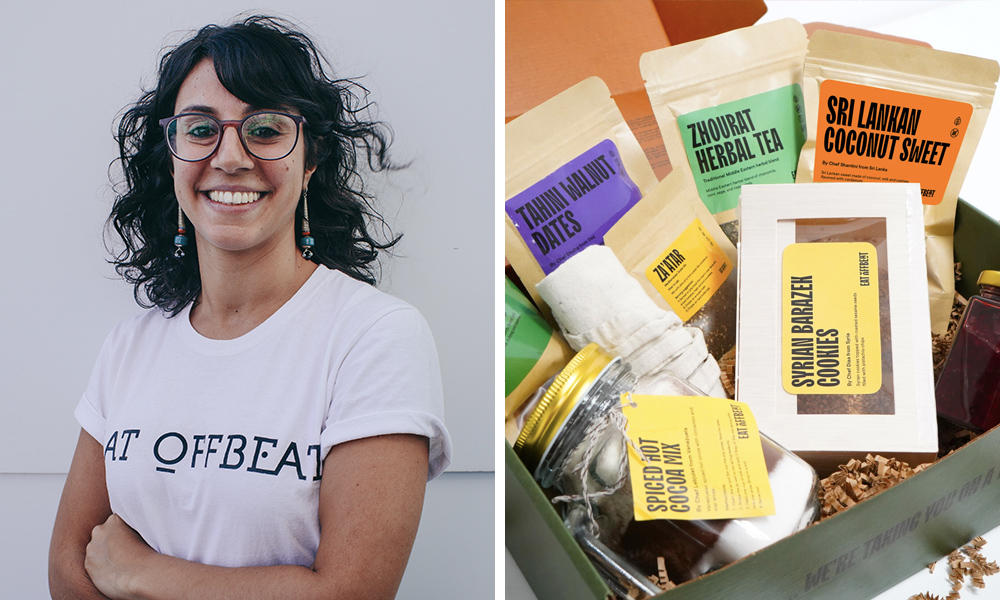 With a background in HR & Diversity, Noel Burgess pursued his dream of becoming a wine writer in 2020. In that short amount of time, he amassed 56K followers who now look to Burgess for expertise and insight on wines, especially those produced by underrepresented groups. Writing for outlets such as VinePair, Burgess promotes diversity and inclusion in his work with hopes to reverse stereotypes about who can drink and love wine, countering his negative first experience at a winery. He dreams of a more inclusive food and drink community and acknowledges there’s still so much work to be done. 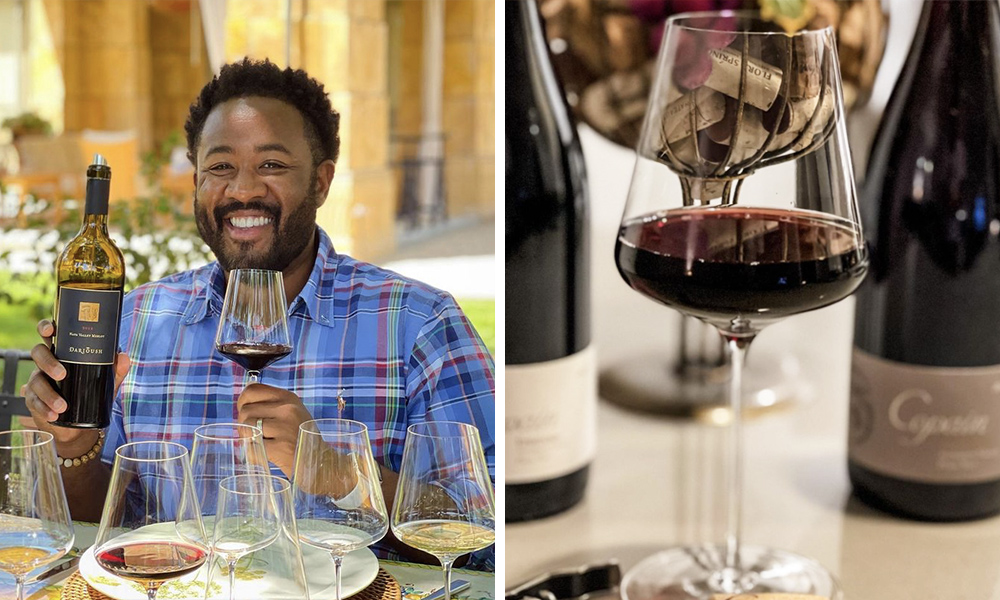 Bronx-born Paola Velez has worked with giants like Christina Tosi and Jacques Torres. But in 2020, her name went up in lights after founding Bakers Against Racism, a social media movement she started with $20 that to date has raised more than $2Mil from over 2400 bakers in 14 countries to support black lives. At the onset of COVID-19, Velez worked as a pastry chef in DC at Kith/Kin and was furloughed with no pay. Shortly thereafter she founded Doña Dona, a pop-up to benefit Ayuda DC which supports undocumented restaurant workers, before launching Bakers Against Racism. Her long list of accolades from magazines like Time Out and Esquire only scratch the surface of Velez’s impact on the culinary world.

As a first generation Chinese American, Lee attended the CIA culinary institute and worked his way up through San Francisco kitchens. But in order to really step up his game, he moved to New York to work at top restaurants like the now-closed Gilt and Eleven Madison Park, including their pop-ups in the Hamptons and Aspen. He eventually landed back in SF at Saison where he is now leading the team. When the pandemic hit, he helped the eatery create Saison Smokehouse in the Embarcadero which featured to-go BBQ kits as well as takeout. 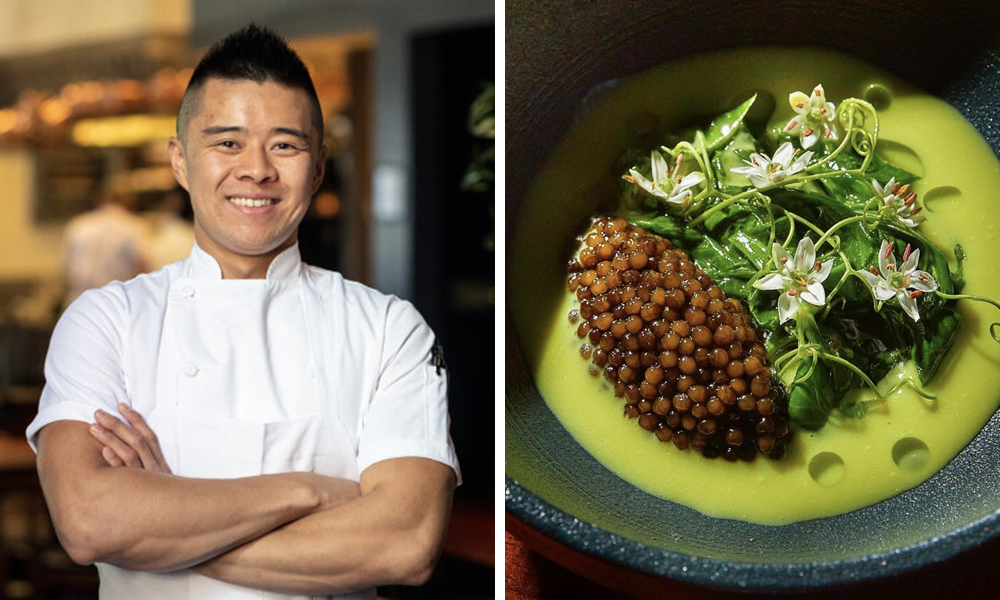 Did you know that Vietnam is the second largest producer of coffee in the world? Sahra Nguyen puts that lesser known fact front and center by founding her direct-trade coffee company Nguyen Coffee Supply which sources exclusively from Vietnam and roasts its beans in Brooklyn, NYC. Having no prior experience in coffee or the CPG world, and as a first generation Vietnamese American, Nguyen seeks to elevate the Vietnamese coffee experience, eschewing old stereotypes that products from Asia should cost a certain amount. Despite the strife of the pandemic, her company expanded exponentially during 2020 and her face has even graced the cover of Food & Wine magazine.

Mbaye spent much of his childhood in Senegal, honing his cooking skills while at boarding school. After moving back to the States, he worked as a dishwasher before attending culinary school, eventually moving to New Orleans to work at the famed Commander’s Palace. He then left to work at Joël Robuchon and Atelier Crenn but returned to New Orleans when the COVID-19 pandemic hit. It was during this time of innovation that his pop-up concept Dakar Nola was born. Highlighting Senegalese flavors with classic technique and a Creole twist, Mbaye hopes to open a brick-and-mortar iteration in the near future. And someday, open a culinary school in West Africa. 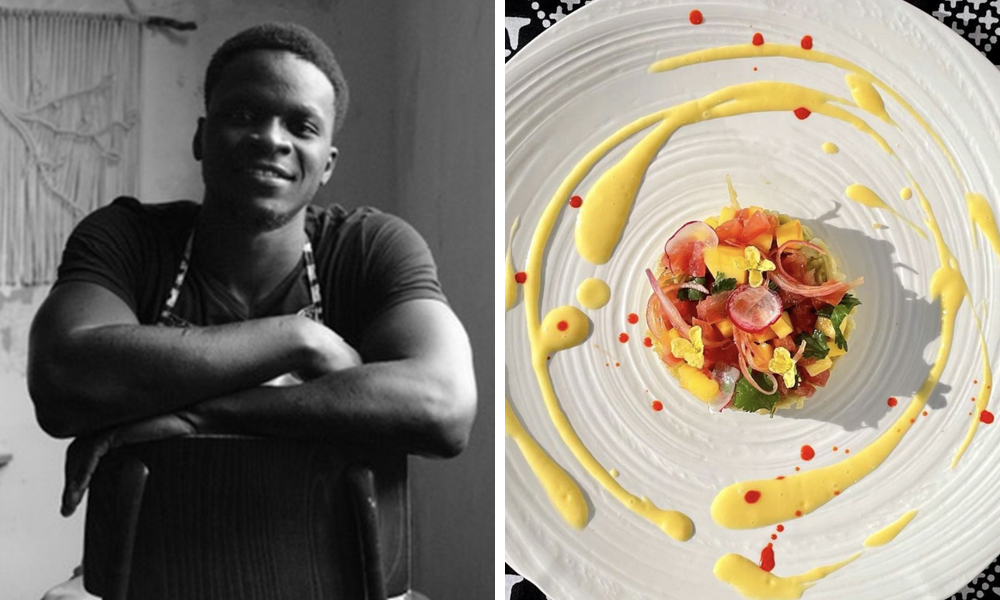 Han grew up inside a restaurant—working at his parent’s eatery as a dishwasher and eventually a chef. He continued to hone his craft by working at hot spots like Ai Fiori and Scarpetta, eventually landing at Stephen Starr’s Le Coucou. Han sadly lost his job there due to COVID, but pivoted to private cheffing and eventually his own concept, Little Mad, in partnership with Hand Hospitality Group. Playing with French technique, Korean and global influences, Han has been wowing diners since opening in June in which he hopes to be part of the next generation to bring Korean American cuisine to the forefront. 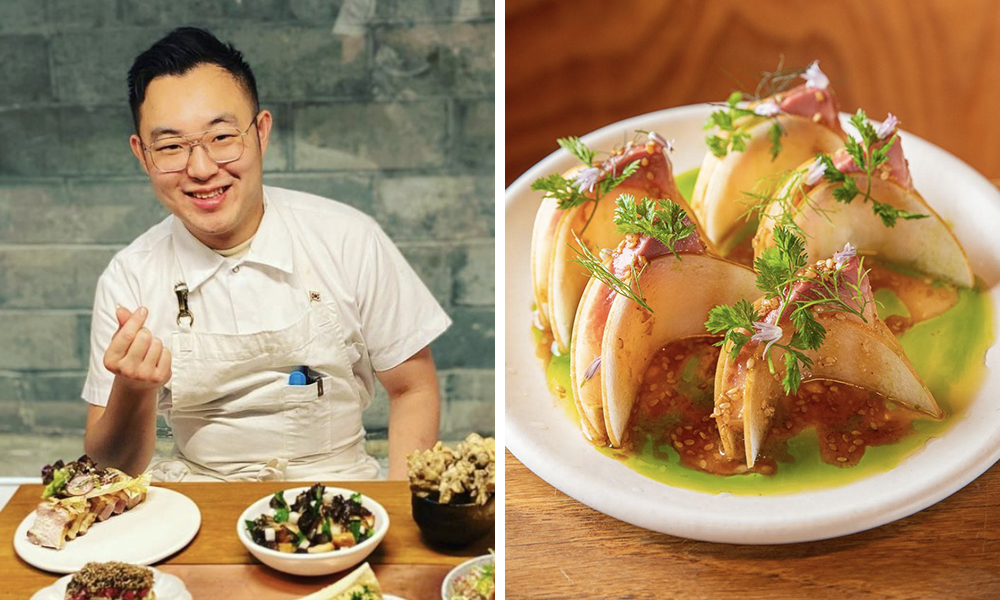 With experience in both the financial and culinary realms, Winston Chiu harnessed these unique skill sets to help co-found the non-profit Rethink Food, which was devoted to helping end food insecurity. A culinary school grad, he was also a partner at the now-closed Little Tong as well as Bonbite Catering. In 2020, he launched his own venture, Feed Forward, a technology-based platform that helps provide free meals to needy recipients four days a week via online ordering. The project was developed both as a response to COVID and through Chiu’s own personal passion to make food more equitable for all.

Combining his background in design with his passion for food, this Silicon Valley Creative Director by day launched Instagram sensation Sushi Artisan in 2017 as his creative outlet. But it was during the 2020/2021 pandemic that the account really took off, growing from 2K to 79K followers in a single year. Sushi Artisan is home to his visually stunning creations and photography — everything from Mondrian-inspired chirashi bowls to sushi plates that resemble a patchwork quilt. 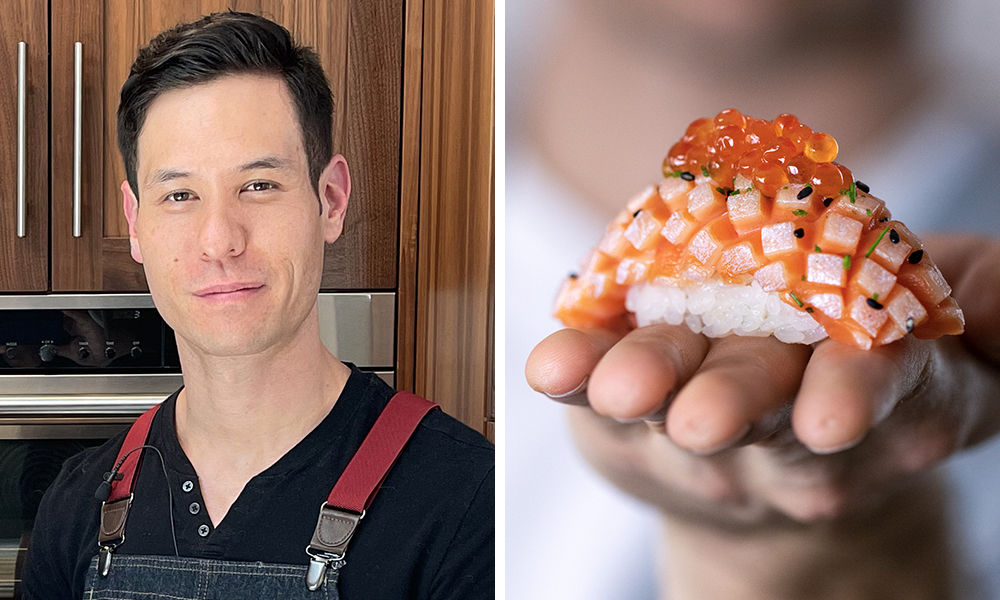 This year Rising Talent 2021 was able to come to life thanks to our partners Perrier-Jouët and Valrhona.