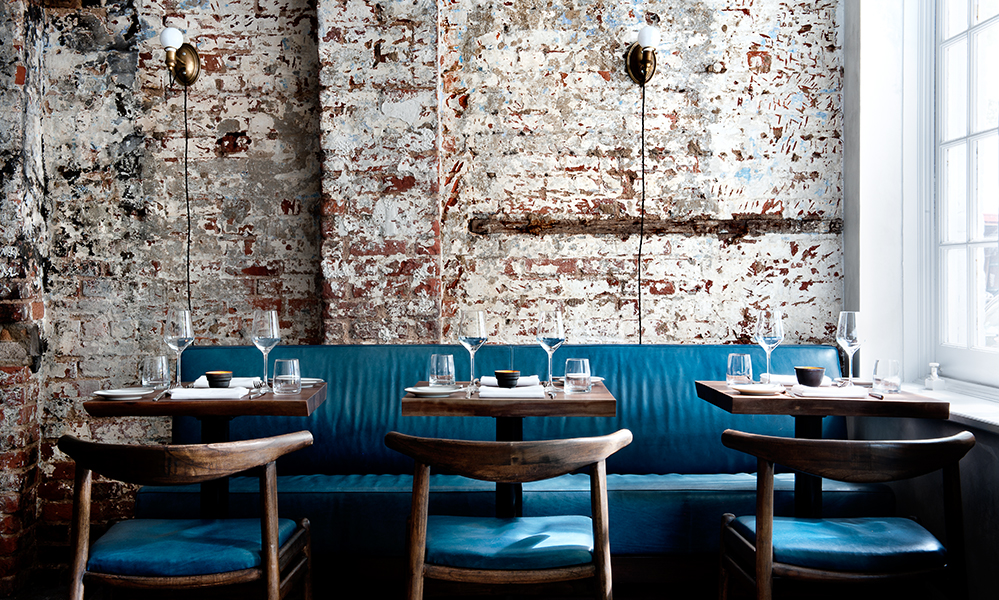 Recently, we had the immense pleasure of interviewing chef Matt Lambert of the Musket Room and learned a little about New Zealand cuisine, his favorite ingredient, and what he enjoys eating on his days off.

Inspired by the spirit of New Zealand, The Musket Room shines brightly while adding a unique flavor to the hip and diverse NoLIta neighborhood of Manhattan, New York. Inside this restaurant’s beautiful interior designed by Alexander Waterworth Interiors, chef Matt Lambert is creating elevated and unforgettable NZ cuisine.

After developing his skills in some of New York’s top kitchens (PUBLIC and Saxon + Parole), Lambert opened The Musket Room’s doors in April 2013 and attained the highly coveted Michelin star within just four short months.

The menu highlights the evolution of New Zealand cuisine, from its Old World traditions and Asian influences to its reverence for the seasons, bringing fresh ingredients to the table straight from the restaurant’s very own garden. Lambert brings his inspiration from his homeland and nature to the table, creating a unique experience of flavors for diners.

There’s been a lot of buzz about this chef and his restaurant lately, yet not enough about who Matt Lambert is, the land he calls home, and what exactly is going on in that kitchen.

NEW ZEALAND
Born and raised in Auckland, New Zealand, Lambert grew up growing, picking, and fishing for food, following and respecting the seasons and all they had to offer. “The greatest influence on me as a chef was cooking and gardening with my mother and grandmother growing up. They taught me where the food was coming from and how to get the best ingredients,” he tells us. As a sous chef at John’s Café in Woodbury, Connecticut, Lambert also worked with famers creating seasonal menus that incorporated the signature flavors of New Zealand. Without a doubt, Lambert brings this farming and gardening influence to The Musket Room, where he’s stationed the restaurant’s very own garden. 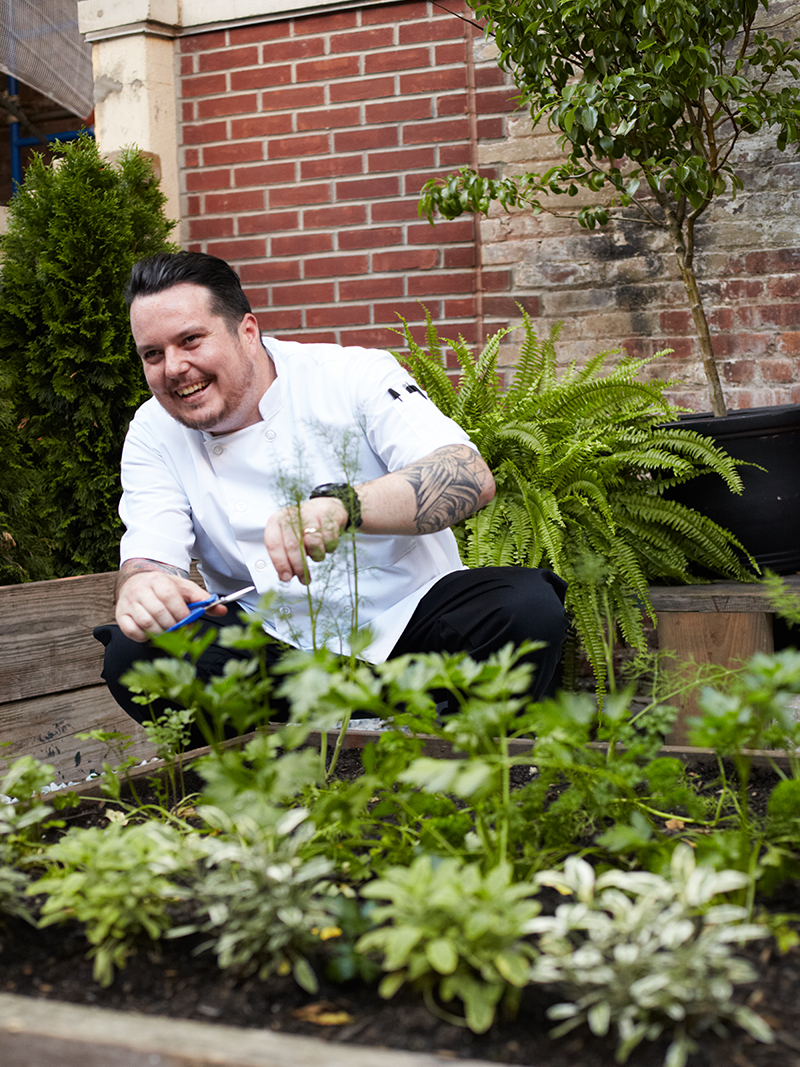 New Zealand cuisine bears influence from a number of different cultures, as it “is still a relatively new country with a growing culture. Initially, New Zealand cooking was heavily influenced by British traditions – the English, Irish and Scottish basically came and continued to cook the way they did in their home countries.” Like most cultures, however, the cuisine’s greatest influence comes from and is the land.

“We’re an island nation so we have some fantastic fish and awesome climate for growing, so NZ cuisine has become about using what we’ve got and making the most of it.” 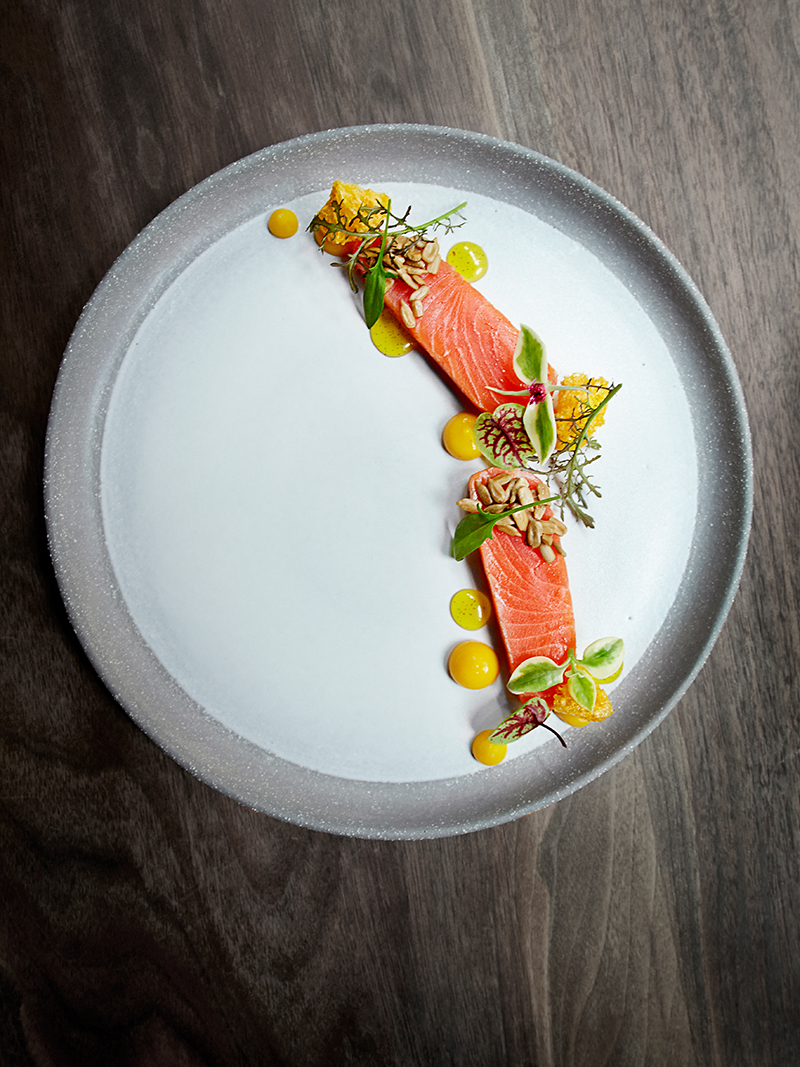 ALL HAIL THE ORA KING SALMON
When we asked chef Lambert what his favorite ingredient was, his response couldn’t have been more suitable: “Ora King Salmon – it’s from New Zealand like myself.” Naturally, we inquired further about this fantastic salmon.

“Ora King Salmon is a quality ingredient, and one of those ingredients that is all encompassing of New Zealand. It comes from one of the cleanest places I have ever seen in my life and tastes amazing. It has a unique attribute in that the fat content is a touch higher. It’s the only salmon in the world with no natural disease…and they’re producing a top quality product while also farming [the] fish in a sustainable manner.” And thus, the Ora King Salmon remains one of his signature dishes served at The Musket Room. 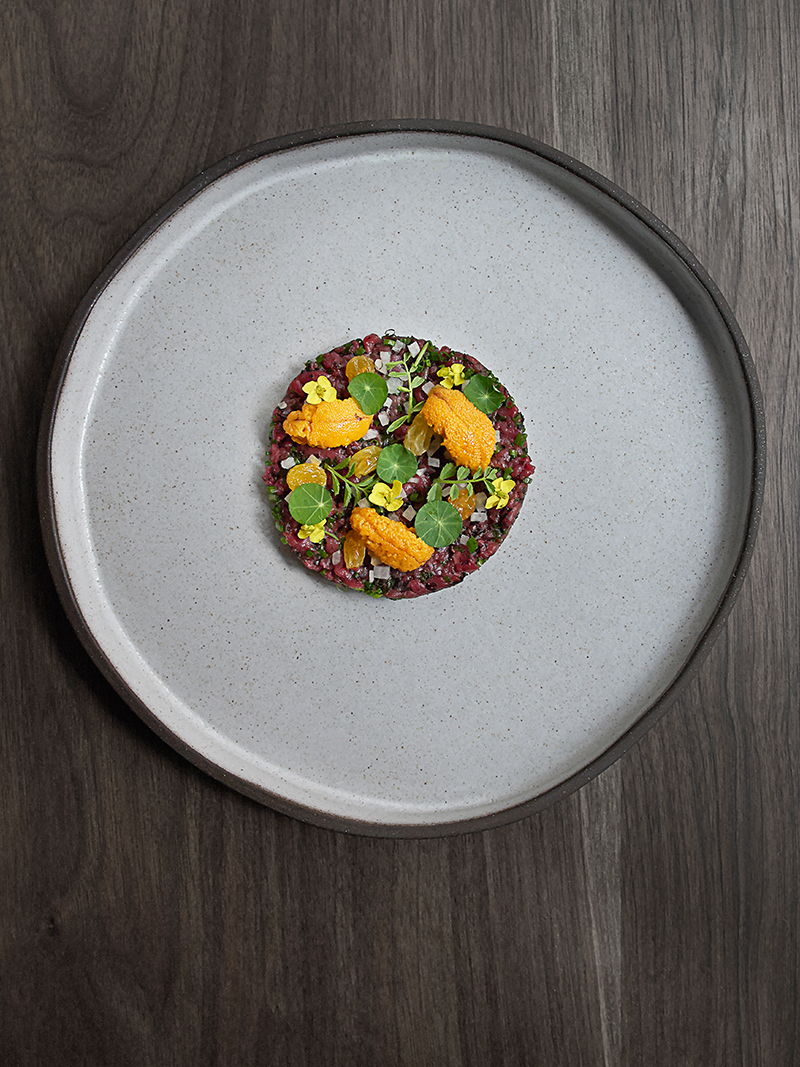 Another one of his better-known, popular dishes is his New Zealand Red Deer. “When I was growing up, my mother’s cousin had a large venison farm north of Wellington. New Zealand is covered in farm land with most people farming sheep and cows, which basically require the same ecosystem. Deer are more unusual; farms tend to be higher up – and as a kid it always fascinated me. Similarly, I really enjoy gin, and juniper just happens to be a natural flavor combination with venison. Combine the two and you have my New Zealand Red Deer with flavors of gin.”

STYLE + INSPIRATION
Like all great chefs, Lambert understands and acknowledges the importance of plating. “Plating is really important to me. Probably just as important as how food tastes, because you eat with your eyes.” Drawing influence from and never limited to his memories, dreams, natural soundings, and places in New Zealand, for Lambert “plating is organic. It’s something that comes natural to [him]…it’s more of an intuitive process…”

Case in point, when it came to plating his oysters at the Musket Room, he reflected back on a recent trip to New Zealand, during which he visited Oyster Bay at the top of the South Island. The beach there is covered in pebbles, thus inspiring him to serve the oysters on a bed of smooth pebbles. 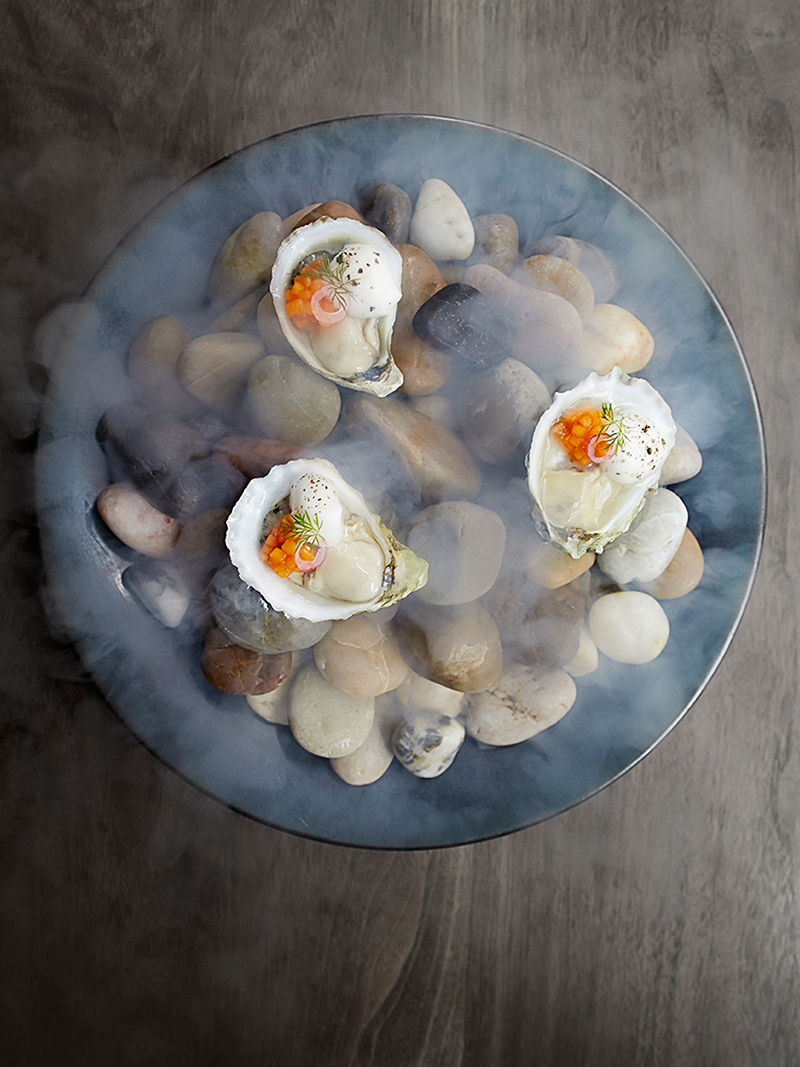 When asked about his style, he says, “In one word – natural. I don’t like to over-manipulate food. Food, in my opinion, is best when you respect the ingredients.” 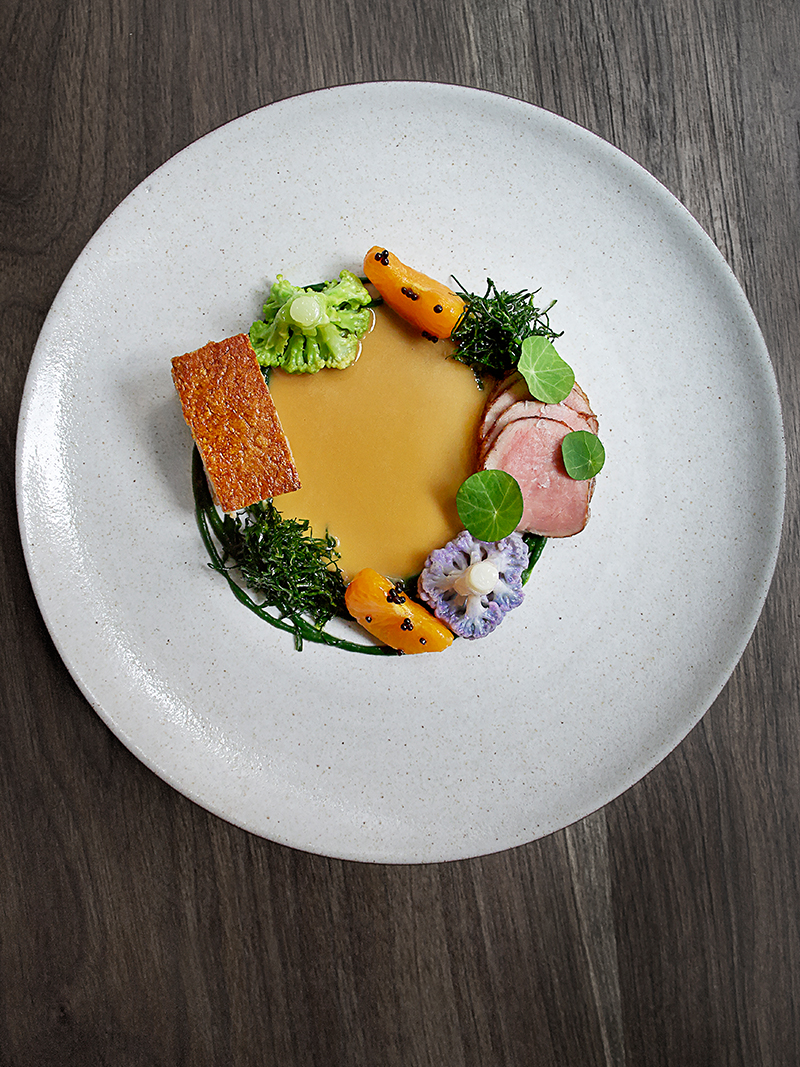 The NZ chef isn’t shy to list off a number of other chefs he admires and looks to for inspiration. In fact, he often looks to Instagram to see what other great chefs are doing in their respective kitchens. “There are a lot of chefs that inspire me. Just here in NYC, alone, chefs like Bryce Shuman from Betony, Matt Lightner from Atera – who does some awesome plating. Shaun Hergatt of Juni – a friend of mine – I like his plating a lot. More globally, Atsushi Tanaka from Restaurant A.T, in Paris or Rasmus Kofoed of Geranium, in Copenhagen.” 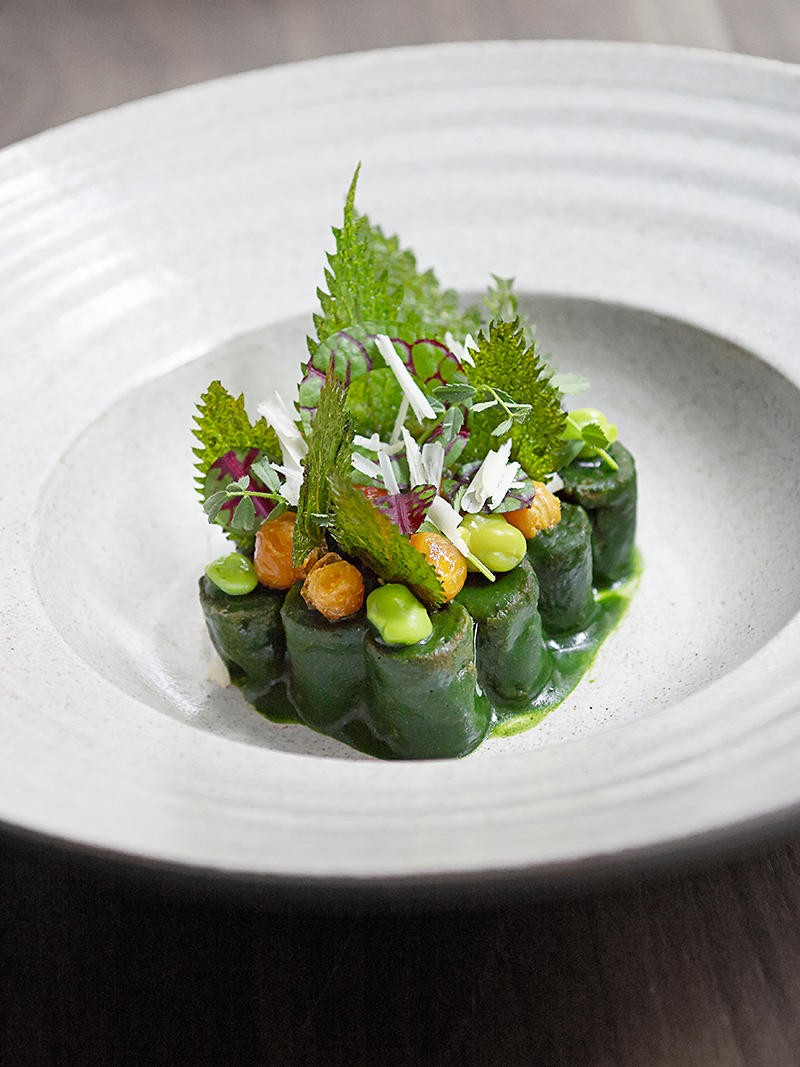 Beneath it all, chef Matt is a humble guy translating the experiences of his youth and upbringing into what he loves – and the passion shows. On his days off, he’s simply a father hanging out and splitting a fat bone-in rib eye steak with his son, Pierce. When he’s not cooking, however, it’s no secret that Lambert is quite the fan and advocate of Shake Shack burgers. 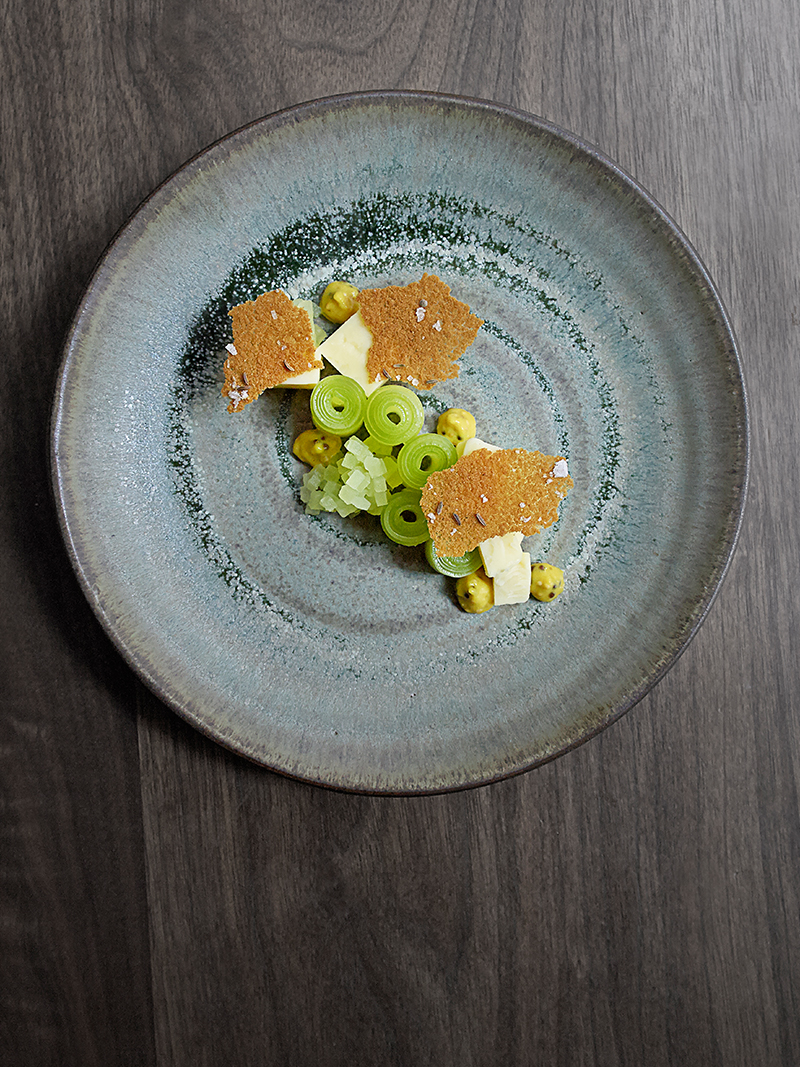 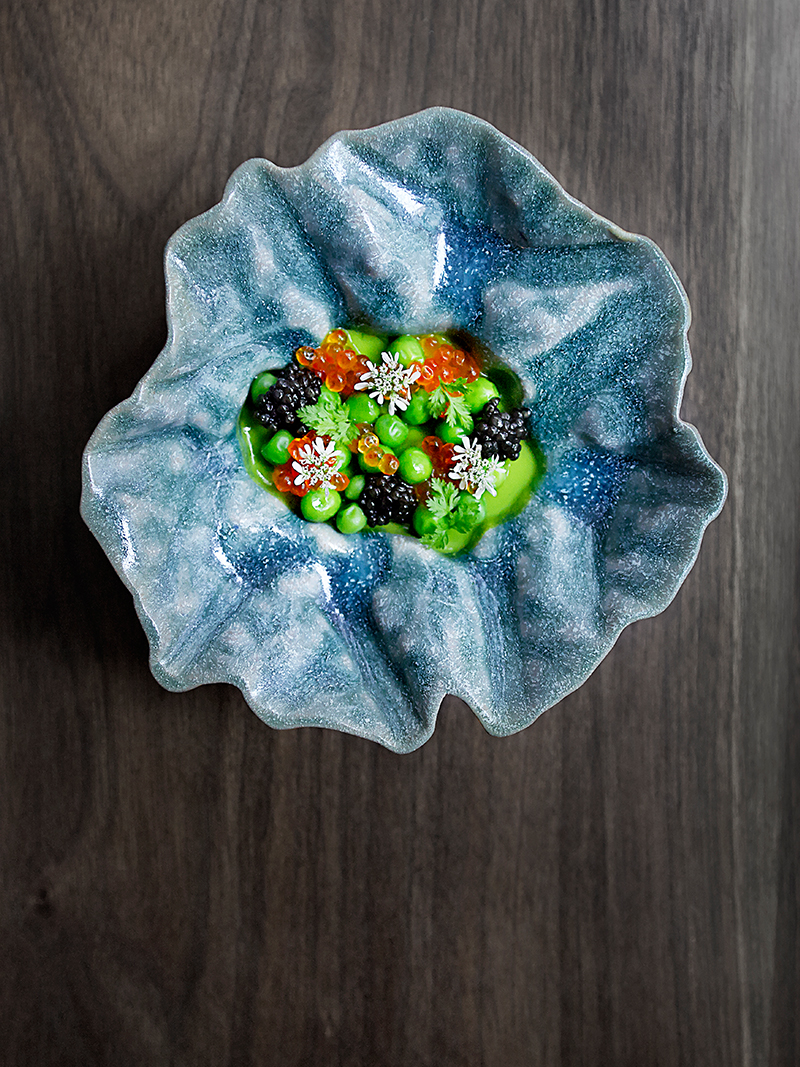 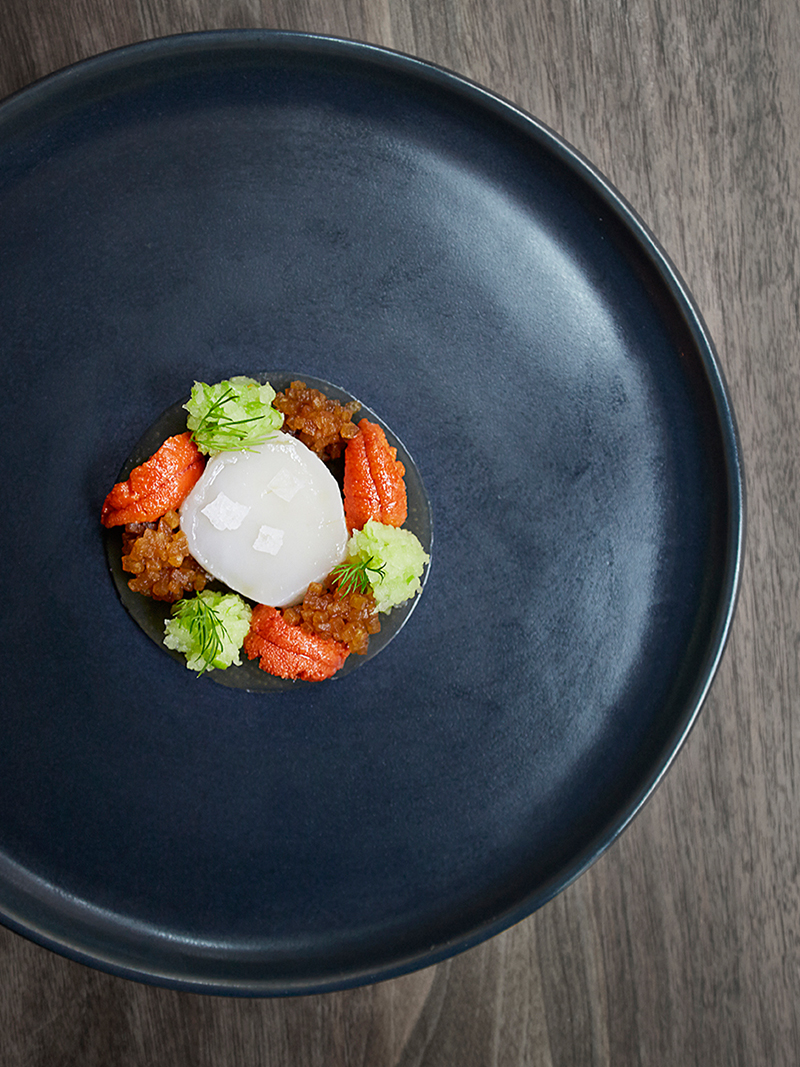 INTERIOR
Now the Musket Room is more than just a michelin-starred restaurant known for great food. People cannot seem to stop talking about the gorgeous award-winning interior at The Musket Room designed by none other than the renowned Alexander Waterworth Interiors. Juxtaposing rustic and contemporary elements, designers James Waterworth and Alexander Evangelou’s simple and elegant vision is remarkable. Guests are immediately welcomed by an incredible 20 foot walnut timber bar. The dining space is enclosed by lime-washed exposed brick, detailed brass lighting, and deep indigo leather accents. 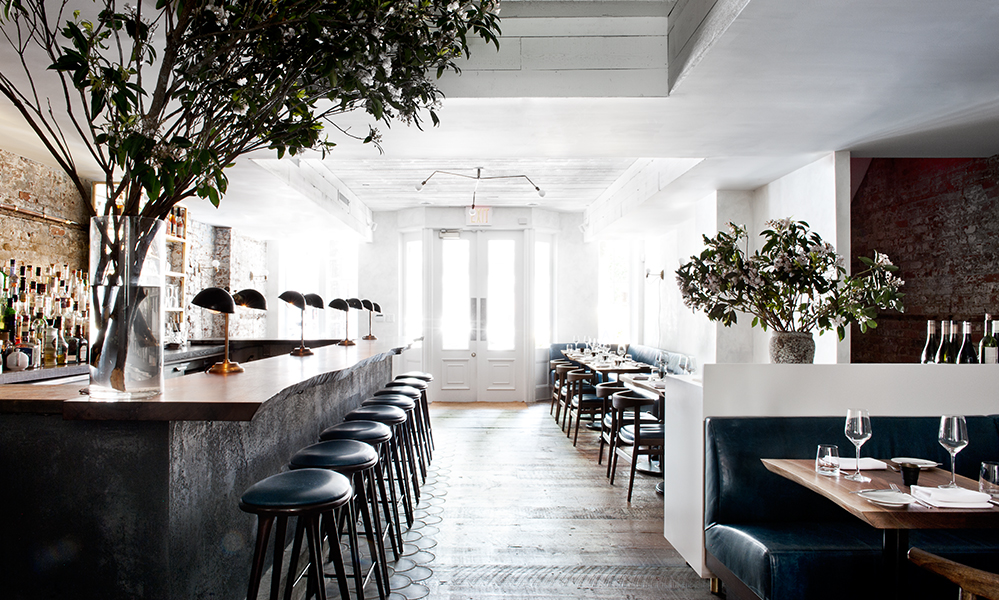 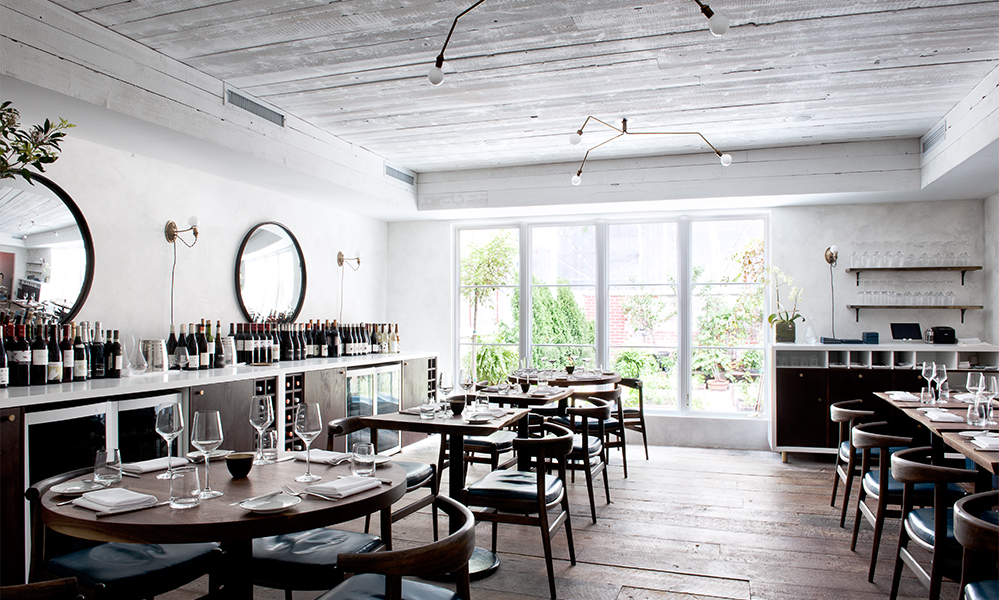 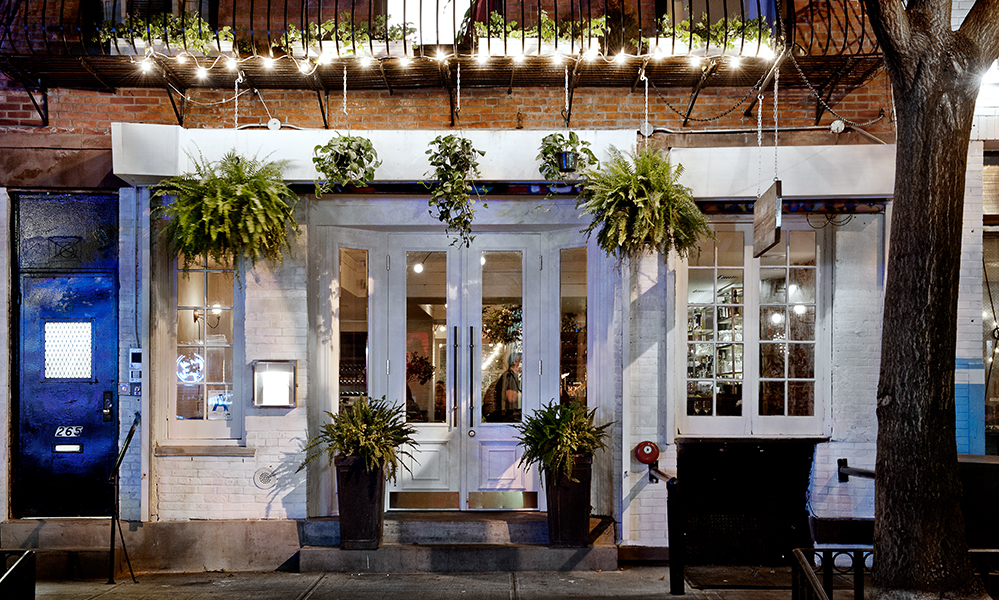 Every detail has been thought out carefully and executed marvelously at The Musket Room. Every element is worthy of admiration – from the chef, to the food, to the fabulous interior – that all wraps up into a beautiful package. The Musket Room is truly a gem quaintly tucked away on Elizabeth Street, offering an intimate space for NZ cuisine in the Big Apple.