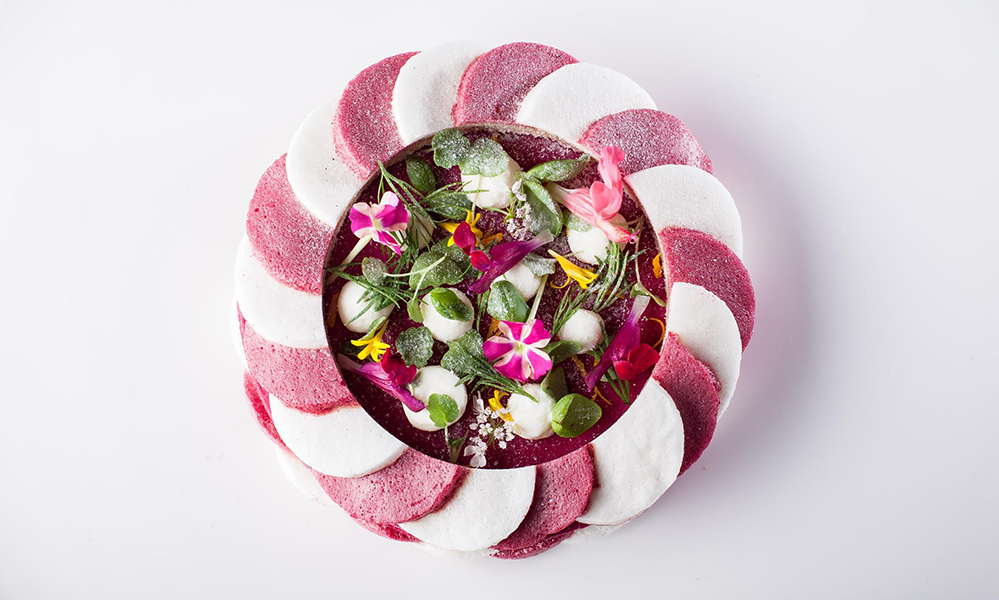 Inside A Cuatro Manos: Food, Friendship, and Collaboration.

Last week, we had the pleasure of attending the grand 3rd annual A Cuatro Manos – a 4 night culinary feast hosted by chef Dani García in Marbella, Spain at the Puente Romano Beach Resort & Spa. Here are our favorite highlights from the tribute dinner to chef Joël Robuchon, a living legend who has received the most Michelin stars around the world – 28 to be exact.

Each year, A Cuatro Manos spotlights a different chef to tribute. Ferran Adrià, highly regarded as the father of Spanish modern cuisine, was paid homage last year. This time around, the spotlight fell on Joël Robuchon, one of greatest chefs of our time who has transformed and revolutionized fine dining to where it is today.

On Robuchon, García says, “It is difficult to add anything that has not been said before: finesse, elegance, flavor, product; but for me, above all – intelligence. Not only do I not know anyone in the world who is better than he, I doubt that there ever will be someone who has succeeded in taking this level of cooking to so many parts of the world.”

It feels like a dream, I have to pinch myself. These two chefs have been such an incredible inspiration to me and to the entire world of chefs. Its hard to understand the impact @joel.robuchon and @ferran_adria have had. I feel incredibly humbled to cook in honor of Joel Robuchon tonight. Thank you @danigarcia7 for creating such a beautiful event! #elevenmadisonpark #foodandwine @foodandwine #dreamcometrue A photo posted by Daniel Humm (@danielhumm) on Apr 18, 2016 at 8:04am PDT

Eighteen Michelin starred chefs with a total of 71 Michelin stars under their belt reimagined Robuchon’s most celebrated and iconic dishes.

“The first night was crazy with 85 people in the kitchen. I told the chefs, ‘You can choose the dishes, and I’ll adapt.’ For me, I’m the host so the most important thing is that the chefs are comfortable when they’re out of their house. It’s not easy, but it’s fun to adapt our menu. It’s great to do something like this and to have very different mentalities and sensibilities in our kitchen,” declares García.

Chef Andoni Luis Aduriz of @mugaritz plating his course to tribute @joel.robuchon at #A4manos #A4manos2016 #TheArtOfPlating A photo posted by The Art of Plating (@theartofplating) on Apr 24, 2016 at 11:40am PDT

Eggs benedict by @danielhumm at the A Cuatro Manos event by @danigarcia7 in Marbella, Spain #TheArtOfPlating #A4manos2016 See all the courses served on our Snapchat now: @theartofplating

An incredible dessert that’s cut table side and meant to be eaten by hand.. Beetroot and yuzu meringue pie w/ sorbet in the center by @albert.adria.acosta at #A4manos2016 #TheArtOfPlating #TAOPTravels Head over to our snapchat: @theartofplating to see more from the night

Camaraderie Outside the Kitchen

If there’s just one thing we took away from this event it’s this: for the chefs, this isn’t just about the dinner. It’s about the opportunity for guests and chefs to connect, collaborate, share ideas, enjoy, and experience the culture of Marbella.

“Dani and his team have shown us the hospitality that I’ve rarely ever seen. They’re just so generous and so warm. You know they say, ‘my home is your home,’ and you hear that a lot, but they really mean it,” says chef Daniel Humm.

Chef Dani García stresses that every year they learn a lot for the next. With grand ideas already brewing, he’s only looking to top it, having all the chefs near and far eager to attend the next year’s event.